Pennsylvania in play @ the RNC

WESTLAKE, Ohio –– Even though Pennsylvania voters have picked Democrats in every presidential election since George H. W. Bush won the state in 1988 – six straight -- Donald Trump Jr. either has not noticed or doesn’t care. 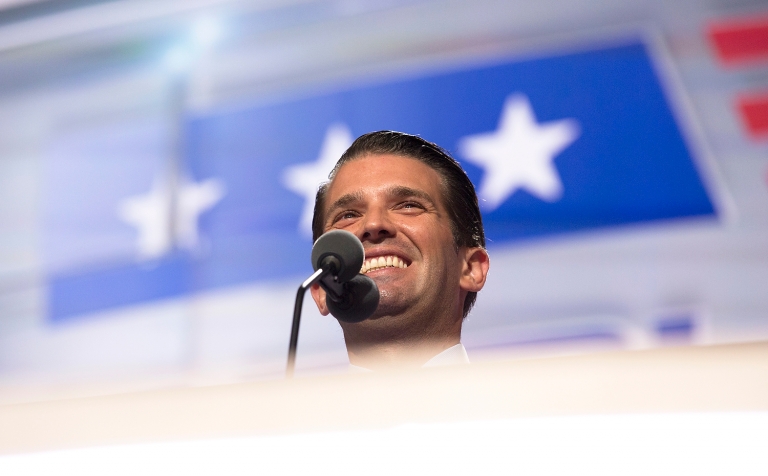 Donald Trump Jr.  practices on stage in preparation for his speech on the second day of the Republican National Convention at the Quicken Loans Arena in Cleveland on Tuesday afternoon, July 19, 2016. (Photo by Antonella Crescimbeni)

Originally announced anonymously as a “special guest,” Trump Jr. surprised about 200 attendees at the Pennsylvania delegation’s breakfast. Less than five minutes after taking the stage, he was on his way out the door, declining to pose for pictures or do interviews.

Coming just one day after U.S. House Speaker Paul Ryan was featured as the first breakfast’s keynote speaker, Trump Jr.’s appearance further legitimizes assertions by party members that Pennsylvania is not only in play this year but also could tip the election to GOP nominee Donald Trump.

“My impression is this [year] is a much larger focus on Pennsylvania than we’ve had for a very long time,” said U.S. Rep. Glenn Thompson, whose district includes Centre County. “Pennsylvania is in play.”

The other quite-noticeable perk for Pennsylvania this cycle – the delegation’s seating in the arena is directly off the front of the stage and should be plainly visible to television viewers.

In the 10 presidential elections since 1976, Pennsylvania has voted for the Democratic presidential candidate seven times, which would seem to suggest that winning the state would be an uphill battle for Republicans.

In the past 40 years, the largest win by a Democrat over a Republican in Pennsylvania was when Bill Clinton defeated Bob Dole in 1996 by a margin of 50 to 39 percent.

The closest margin was 2 percent -- Jimmy Carter’s win over President Gerald Ford in 1976.

The largest Republican win in Pennsylvania was in 1980, when Ronald Reagan won 50 percent of Pennsylvania voters to Carter’s 42 percent.

Pennsylvania, with its 20 electors, is among 21 states with 10 or more electoral votes in this year’s election. Just five of those have voted Democrat more times than Pennsylvania in that span.

Still, the battle for Pennsylvania might be one worth fighting for the Republicans.

The candidate to win Pennsylvania has gone on to win the presidency eight out of 10 times since 1976. Only two states, Ohio and Florida, have higher success rates.

Furthermore, Pennsylvania voted for the Democratic candidate both times it didn’t vote for the actual winner – when George W. Bush defeated Al Gore in 2000 and John Kerry in 2004.

Michael McMullen, a delegate from Allegheny County, said if the Republicans win Pennsylvania, that result could create a “domino effect.”

“Iowa, Indiana –– Indiana should be safe this year –– Michigan,” McMullen said. “The road to the White House is through the Mid-West, and Pennsylvania as well.”

Each speaker featured at the breakfasts on Monday and Tuesday emphasized the importance of Pennsylvania supporting Trump, as some Republicans still remain uncertain of whether he is the best candidate to represent the party.

Iowa Senator Joni Ernst and Alabama Senator Jeff Sessions, both of whom were talked about as potential vice presidential running mates for Trump, followed Trump Jr. to the podium Tuesday. Each also spoke about Pennsylvania’s importance.

“If we want to send Donald Trump to the White House, we have to win Pennsylvania,” said Sessions, who was the first U.S. senator to back Trump’s candidacy.

Trump Jr. pointed out to the crowd that he has some Pennsylvania connections. He attended the Hill School, a boarding school in Pottstown, as well as the University of Pennsylvania. He noted that he now spends a lot of time in the Catskills.

“I can throw a stone into Pennsylvania,” he said, adding: “I owe this state a lot.”