The kid and the cop @ the RNC

CLEVELAND – An 11-year-old aspiring police officer walking up to an Ohio State Trooper to chat on Thursday is an example of the positive interaction that many Cleveland residents have had with members of law enforcement from across the country in the past week. 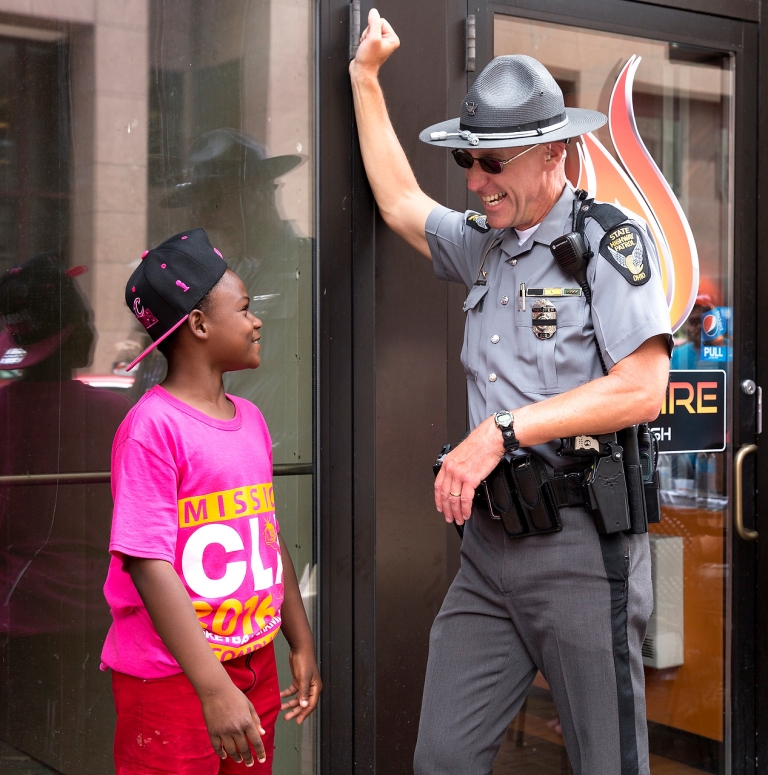 Chrishaun Butler, 11, of Cleveland, Ohio, jokes around with Ohio State Trooper Shane Zehnder, 46, on the fourth day of the Republican National Convention on Thursday, July 21, 2016. (Photo by Antonella Crescimbeni)

“I learn about police officers from home,” said Chrishaun Butler, who noted that he would also accept comedian or professional basketball player as a career backup.

The state trooper, Shane Zehnder, 46, said that Butler came over and started talking to him while working at his family’s vending booth selling Donald Trump T-shirts and campaign buttons on Euclid Avenue.

Zehnder, who was in town as part of thousands of officers coming to Cleveland to assist with police activity throughout the Republican National Convention, said that things haven’t been too bad through the duration of the week.

“The community is why the police is here,” Zehnder said, gesturing to the people walking up and down the street. “We’ve been in town since Friday and the first couple days were basically moving in.”

While hundreds of protestors have demonstrated, police agencies, as of Thursday afternoon, have largely tamped down serious incidents. Police had made just 23 arrests, and 18 of those were the result of a flag-burning event Wednesday afternoon, according to police.

Butler, who said he’s got his “whole life planned out” for him, also said that he knows that the troopers were there to help make sure everyone was safe during the convention.

“You’re trying to protect people downtown because you know there be a lot of commotion,” Butler said. “I watch the news.”

“I’ve seen some crimes,” Butler added, in between discussing his favorite basketball teams and his enjoyment of soccer with the state trooper.

Meanwhile, about 10 feet away, Butler’s uncle, Saleem Muhammad, was busy stacking tees on the stand in order to sell. He said he didn’t have any strong feelings about seeing his nephew interact with the trooper.

These exchanges between the community and law enforcement in Cleveland throughout the week were not one-of-a-kind. From the time conventioneers arrived in town on Sunday, police offers were mingling with passersby, even buying Skittles and M&Ms on the street from children.
Butler said that he walked up to Zehnder after noticing that the trooper was wearing a gray uniform. Butler said he had been able to distinguish different police agencies by their uniforms.
Zehnder said that there was law enforcement personnel from 23 states.

“I’m so glad that I met this trooper,” Butler said.