Some students struggle to cook. Nick Cradler is not one of them.

When he saw that his Penn State roommates were eating the same meal every night -- usually chicken and rice -- he thought he could do better. After seeing what he was serving, dozens of his friends agreed.

“One for One Cooking” was born.

One for One Cooking is Cradler's name for the program he started at Penn State. Every Monday, Nick posts a new menu on the One For One Instagram page (@oneforonecooking). Followers can pre-order a meal by Tuesday at midnight in order to pick-up their order that following Wednesday. All of the proceeds from One For One go to ShareTheMeal, a United Nations World Food Program that benefits world hunger. Thus far, One for One Cooking has donated roughly 575 meals through the ShareTheMeal app. 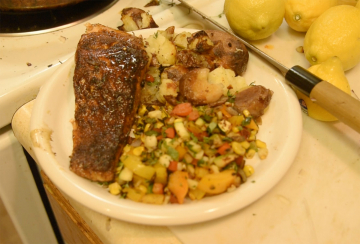 One of the meals Nick Cradler prepared for One For One: blackened salmon with lemon garlic butter sauce served with a summer corn salad and smashed potatoes. Photo by Shea Sugrue

On a typical week, Cradler sees friends, fellow students and even local State College residents who come to buy a meal. Cradler said that he has met many friends through the program and that it is a great way to bring people together. “You really don’t get to see people that often since we’re not on campus so it really brings people together,” says Nick.

The weekly menu at One For One varies from chicken tacos with homemade salsa to shrimp scampi, and even crab cake sandwiches with homemade French fries. Cradler likes to showcase his different areas of expertise by switching up the cuisine choice each week. His favorite food to cook is Asian cuisine. This is something that he hasn’t been able to make for One For One yet due to the difficulty of the amount of dishes needed to be made in large batches.

Cradler cooks all of the meals in his small apartment kitchen in downtown State College. With the windows open, and his favorite EDM music blasting, Nick serves each meal in to-go containers that were donated by local fans of One For One. When each customer comes to get a meal they typically end up talking to Cradler and hanging out with him for a while, making it a great opportunity for Nick to meet new friends.

Cradler will be graduating this spring and moving to Philadelphia to work in banking. When asked what will happen to One For One when he’s gone, Cradler states, “There have been a few people who have reached out to me and said they would like to continue One For One once I’m gone. I would really love for that to happen so I hope that whoever takes it over is passionate about cooking and serving for the cause”.

Cradler hopes to open his own restaurant one day and showcase his talent in cooking this way. “Food brings people together and I think that’s something that is really special. I’m happy that I was able to do what I love and also help people in need. It’s a very rewarding feeling."

Video: “Food brings people together and I think that’s something that is really special.”

Nick Cradler sets the mood while he cooks with his favorite EDM music blasting through the kitchen. All of the customers love to hangout with Nick and enjoy the great vibes while he cooks.