While the world started shutting down with the spread of the coronavirus, Paralympic swimming star Jessica Long scrambled to find an open pool.

Pools in her hometown of Baltimore were closed, but her competitors still had facilities where they could train. The second-most decorated U.S. Paralympian of all time had to drive to a pool two hours away, just to get in her normal sessions. 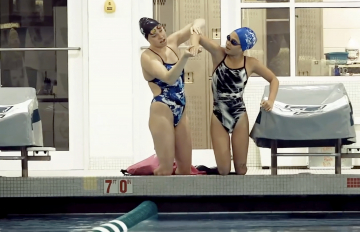 Jessica Long helps a younger competitor stretch out before a Paralympics training session at the pool.

So, when she received word on March 24 that the Tokyo Paralympics were postponed, her first feeling was relief.

“As athletes, we knew it was coming,” Long said. “I think it was just a matter of them finally announcing it and the hardest part was just that waiting period.”

Since then, the 28-year-old has been allowing herself to feel every emotion and keep control over what she can. While she has spent time to grieve the temporary loss, she said in a recent phone interview that she is much more focused on remaining positive. In addition to muscle memory, Long said mental toughness will get her through the challenges presented by the COVID-19 outbreak.

Training does look different though for an elite swimmer with no pool. Instead of her usual two-hour practices twice a day, Long has been forced to cut down to 30- to 45-minute workouts in her living room and trips to her physical trainer, who has remained open during the pandemic.

“I am already preparing myself that it's not going to feel right,” said Long, thinking about when she can get back in the pool. “The feeling that I'm used to, the swimming that I crave, that I love, that I work so hard for, it's going to be really tough.”

For the four-time Paralympian, it is not as simple as substituting sets in the pool for a run outside. Long, a double amputee, chose swimming because she could take off her prosthetic legs. Now, she finds herself using the exercise tapes she once relied on after surgeries when she was younger.

Born with fibular hemimelia, Long had no fibulas, ankles, heels and the majority of bones in her feet. Adopted from Russia as a baby, she had both of her legs amputated below the knees when she was 18 months old.

Just over a decade later, Long made her Paralympic debut at the Athens Paralympics in 2004. At 12 years old she won her first of 13 career Paralympic gold medals as the youngest member of Team USA. Since then, she has dominated the international para swimming circuit, with 23 Paralympic medals to date.

Long also is an advocate for fairness in the Paralympics and is particularly vocal on how Paralympic athletes get classified for competition -- the idea being to keep groups of athletes with similar disabilities competing against each other.

Going into the Tokyo 2020 Games, Long openly expressed concern for the integrity of the Paralympics, claiming athletes have been deliberately underperforming to compete against less able-bodied competitors. This abuse of the classification system is known as intentional misrepresentation.

The postponement of the games, however, could provide an opportunity to level the competition. Though the International Paralympic Committee has not yet commented on the issue, its Athlete Classification Code was set to be renewed at the start of 2021, following the games. Long is curious to see what positive impacts the Paralympic delay could have, especially since many of the competitors she believes have been misrepresenting are up for review in 2021.

“It's a waiting game, but I'm really interested to see what's going to happen, because it definitely was going to be a wild Paralympics and I don't stand for cheating,” Long said. “I like fair play, I compete clean, I work really, really hard. I've worked hard my whole life and I really admire that with other athletes.”

Long also hopes the pandemic will bring more attention to the financial needs of Paralympic athletes, who earn less than half of the monthly stipend their Olympic counterparts receive. While Long said she is lucky enough to have sponsors and her book “Unsinkable” amidst the financial repercussions of the outbreak, for her teammates without that support these are difficult times.

There has been progress with Operation Gold, an initiative which introduced equal payouts for medal performances by Paralympians and Olympians, but Long thinks there is still work to be done.

While she waits for social distancing orders to lift, Long has been keeping more than busy in quarantine. Fortunately, she is in good company with her husband, Lucas Winters. The couple married in October and have been enjoying quality time together while she trains and he works remotely.

Long said she is starting to run out of projects in their Baltimore home. Since the lockdown began, she has painted their living room and closets, remodeled their fireplace and obsessively cleaned every inch of the house while listening to true crime podcasts. She also finds comfort in constant phone calls and Zoom meetings with her five siblings and parents.

For Long, her focus during the pause in training all comes back to her goal to control the controllables. Even without a pool, swimming is providing the support that will get Long through, until she can take the block at the Tokyo Paralympics in August 2021.

“As an athlete, or anything really tough, there is always that moment that you want to give up, especially as a swimmer,” said Long. “Every day I would feel that in practice, ‘Am I going to get through the set?’ and I think it's in those moments that you have these opportunities to come out even stronger, and that's just kind of what I'm falling back on.”

(This story was produced for the John Curley Centerfor Sports Journalism. Text by Nina Trach, video by Josie Chen. Additional video footage via CNN and Mode)