Students are back on campus at University Park. One strategy designed to help keep them there is to limit contact between classes to people they trust who are taking the same precautions they are to prevent the spread of Covid-19. Here is a look at pod life at Penn State in September 2021. 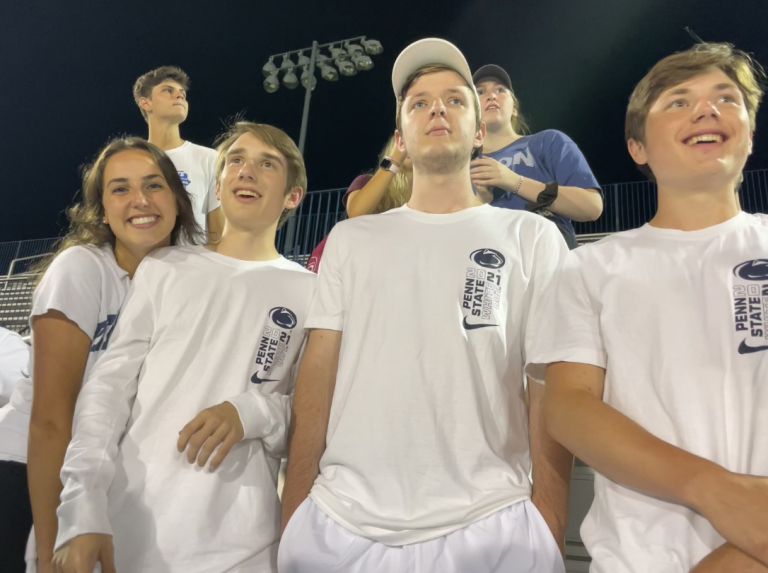 Bella Ferreira, Ryan Miller, Patrick McHale and Dean Miller Jr., all sophomores, watch the Penn State vs. Pitt Whiteout home soccer game. They said they enjoyed being able to cheer on the Nittany Lions with other students again without having to wear a mask. Unfortunately, the Nittany Lions lost 1-0. / Photo by Deitric Murphy 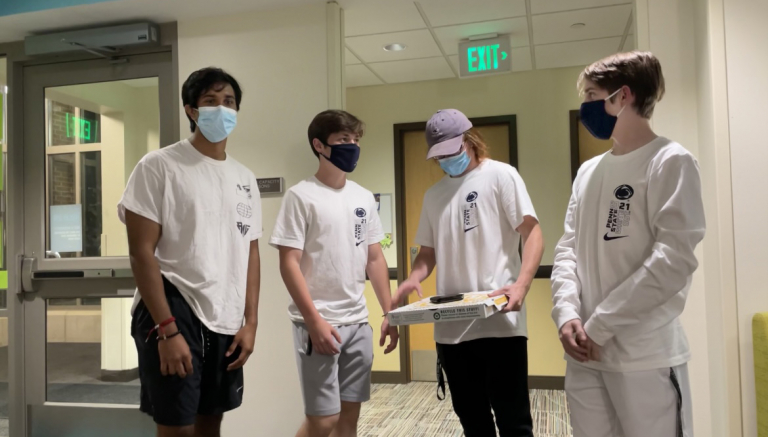 On their way home from the soccer game, Zain Morshed, Dean Miller Jr., Michael Milkowich II and Ryan Miller picked up some Papa John’s grilled chicken pizza for a late night dorm snack. Following university rules, they put masks back on upon entry into their dorm. / Photo by Deitric Murphy 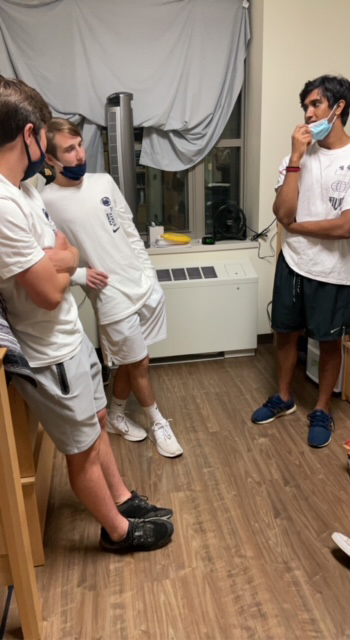 Inside their own dorm room, with roommates they trust, masks come down for Dean Miller Jr., Ryan Miller and Zain Morshed. The room has both air conditioning and vertical fans to keep air moving. Recently it was announced that the Borough of State College will temporarily require masks to be worn indoors at public events. / Photo by Deitric Murphy 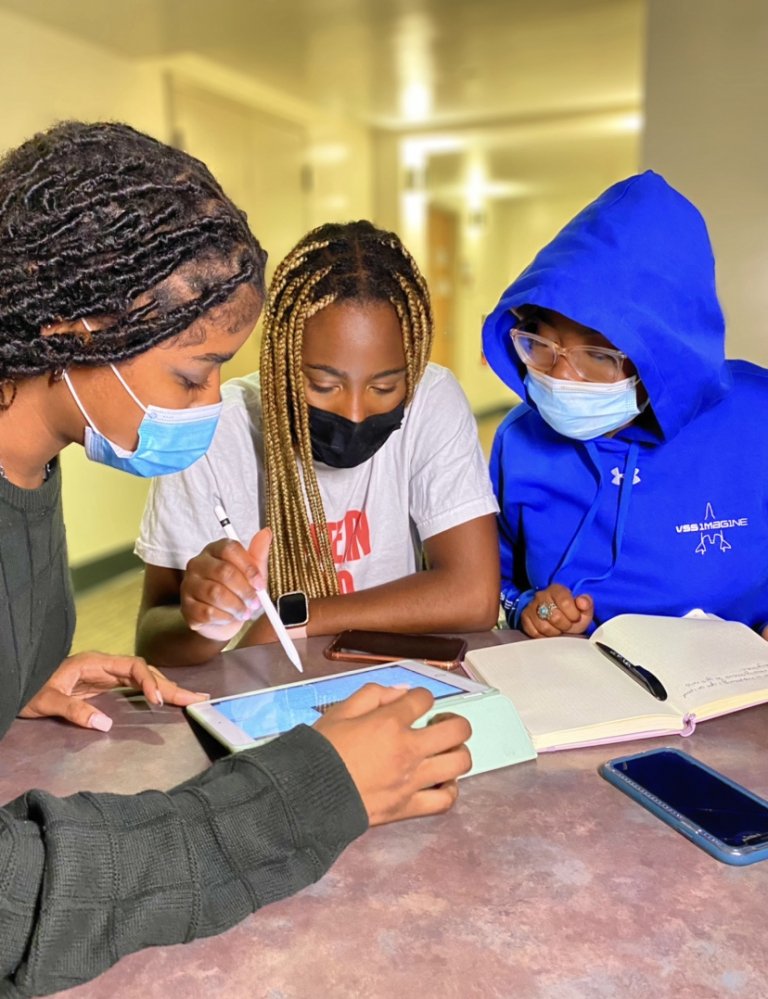 Penn State engineering students, Nelloe Anonyuo, Virginia Nyaribari, and Siani Marcus, have been living together since their second year of college. They share a similar attitude on the pandemic, and they agree to do all they can to keep each other safe and take all the preventative measures necessary amid the Covid-19 pandemic. / Photo by Kayla Giraud 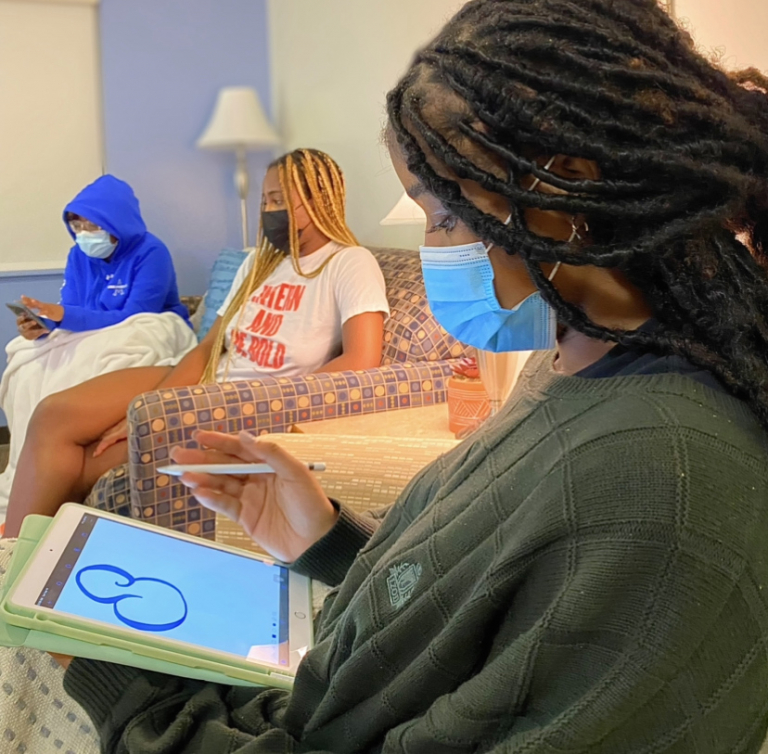 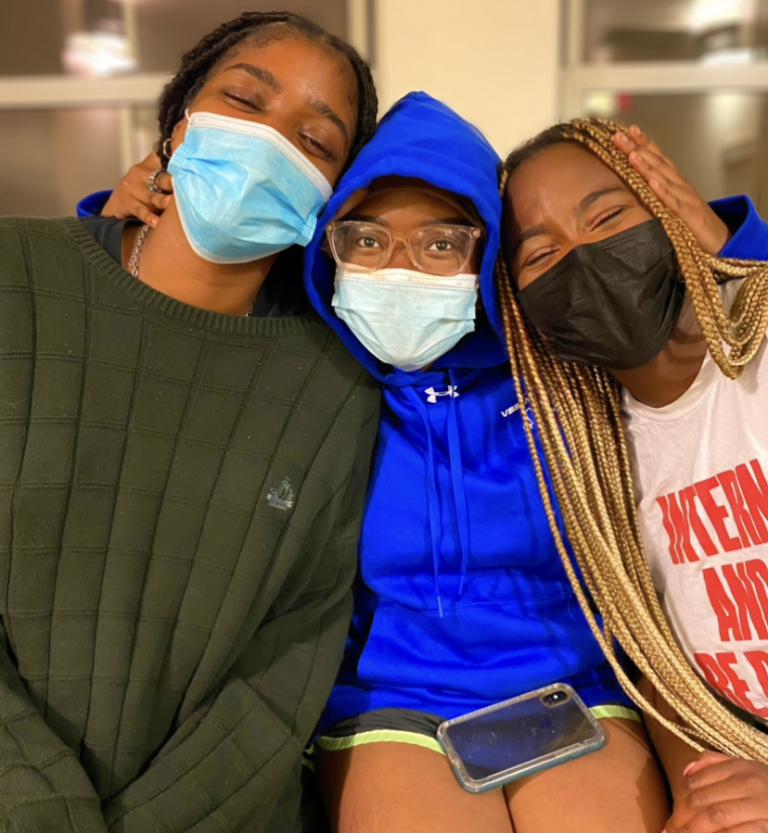 Nelloe Anonyuo, Virginia Nyaribari, and Siani Marcus trust each other in uncertain times. "We all know the risks of being on campus in a pandemic, and we want to make sure we're being safe every day to prevent infection in our group," Anonyuo said. / Photo by Kayla Giraud 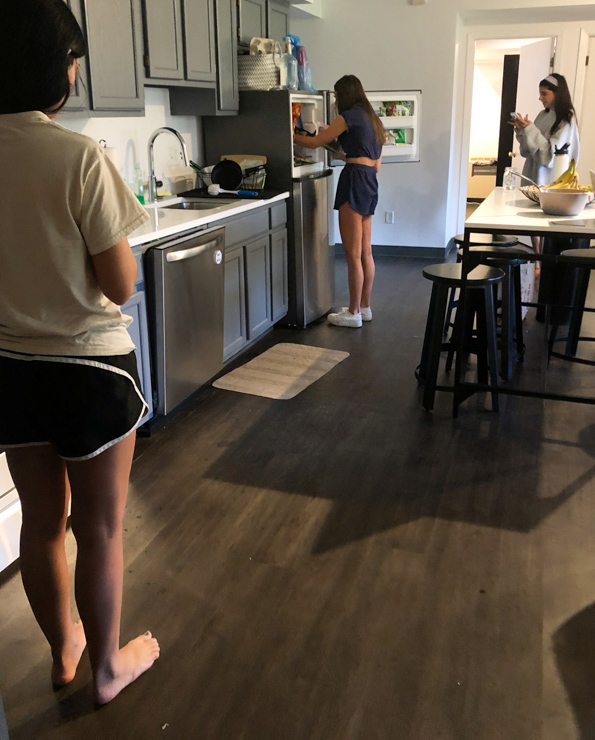 From left, Hannah Leight, Olivia Saylor and Merissa Leeker gather in the kitchen of their State College apartment as they try to find a tailgate to attend before the first home football game. It wasn’t until recently that the three started going out to parties and bars again, as they didn’t see the point when everything was shut down earlier this year. Last spring, all three tested positive for COVID-19 at the same time and quarantined together for two weeks. “It was definitely easier quarantining with my two best friends, as I feel I may have gone crazy being alone for two weeks,” Saylor said. The women said they have become more comfortable going out this school year, as the reported cases at Penn State have decreased sharply. But as the Delta and newly surfaced Mu variants continue to spread, they said they want to be cautious when going out. / Photo by Lisa Moyneur 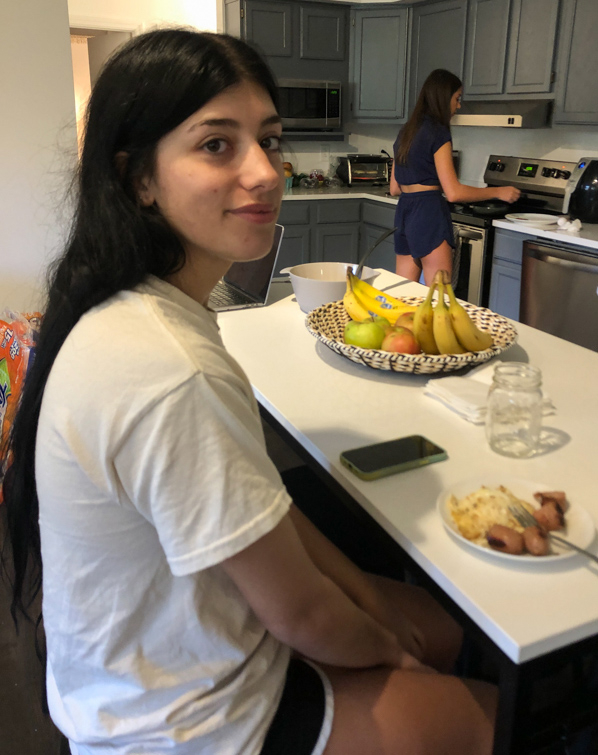 Hannah Leight sits down for breakfast being prepared by roommate Olivia Saylor before Penn State's first home football game, which she plans to attend. Leight is the only one in the apartment who is not vaccinated and continues to get tested every week by the university. “I’m definitely trying to minimize my exposure by staying away from crowds and being outside as much as possible, as I’m the maid of honor for my sister’s wedding next weekend, and if I test positive, I can’t go,” Leight said. / Photo by Lisa Moyneur 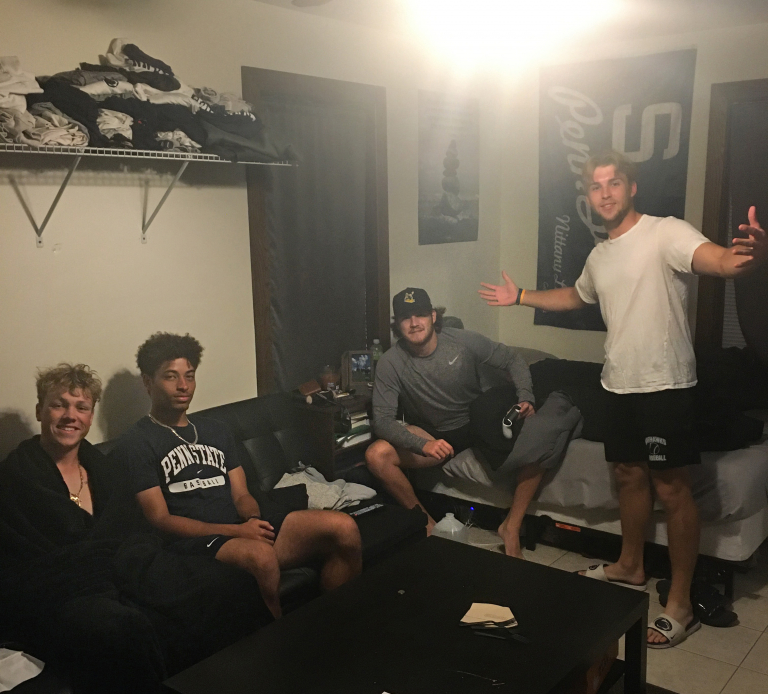 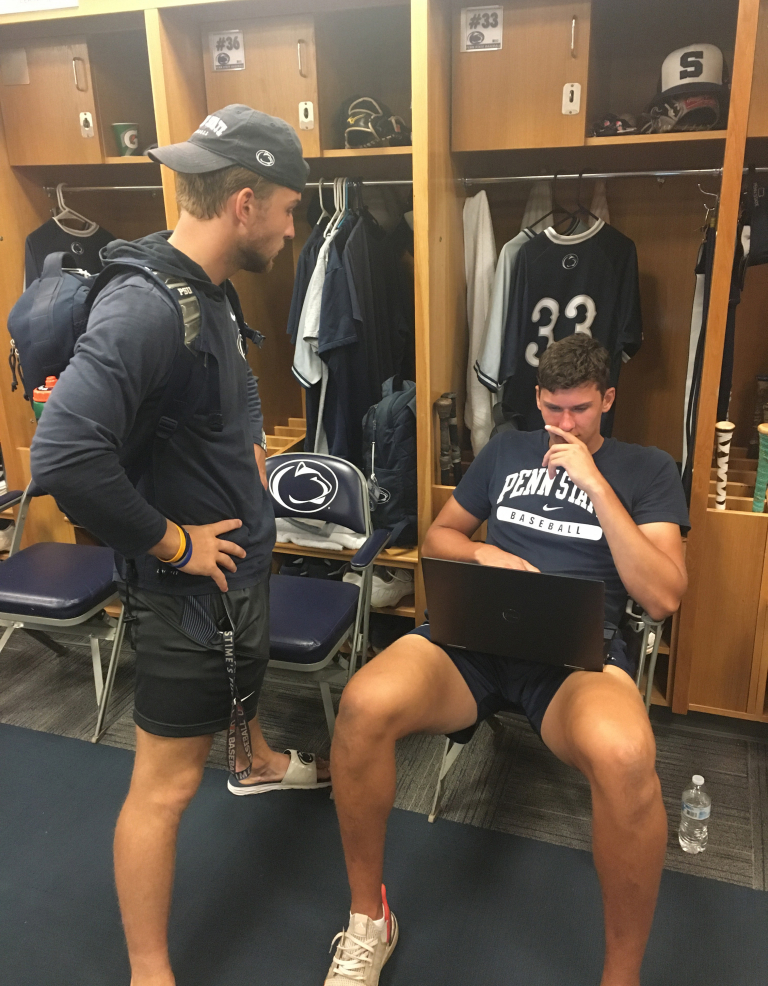 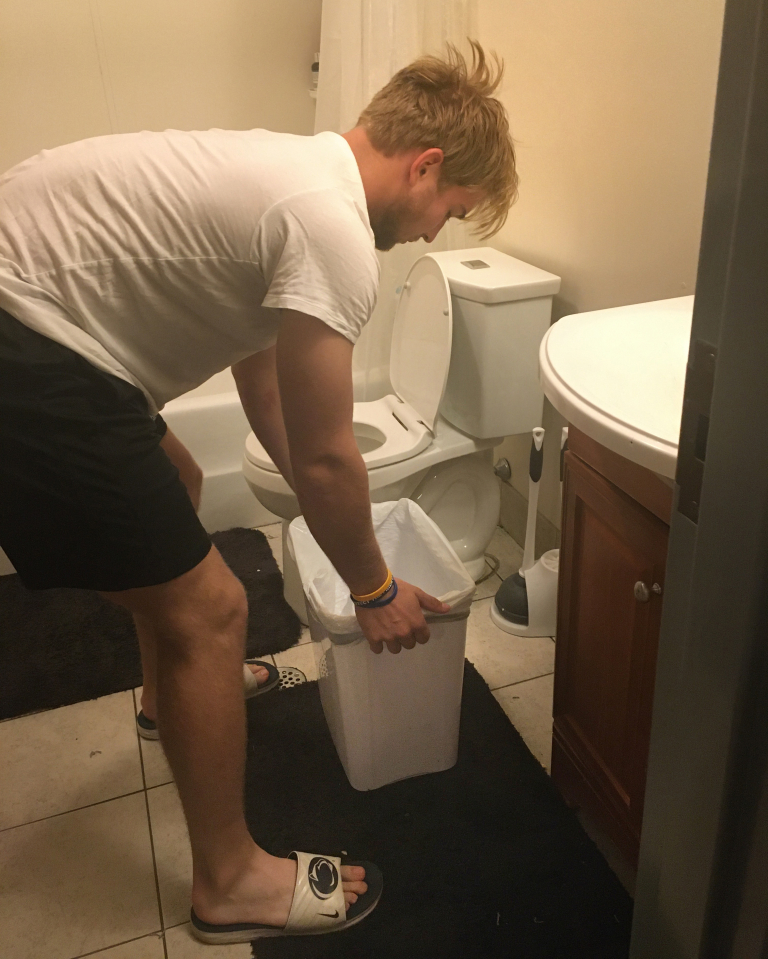 Matt Wood has assigned house chores, including taking out trash and changing the trash bag at his house on W College Avenue in State College. / Photo by William Kahn 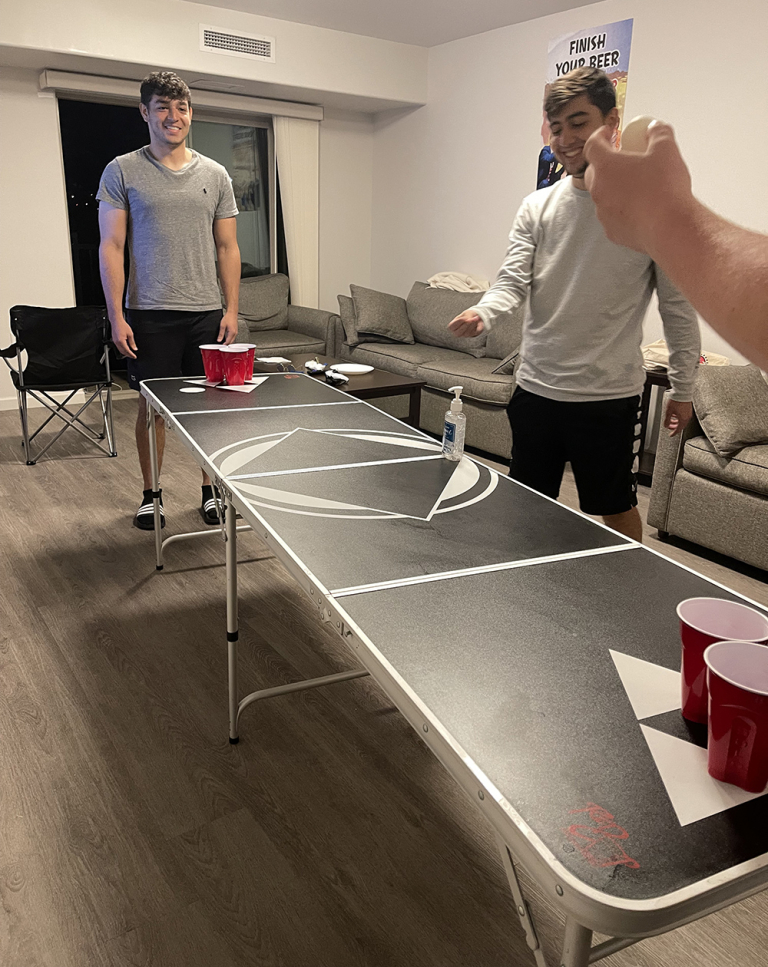 John and Luca wait for Cooper Cox to put a ball in play after Cox bought a ping pong table to provide home entertainment for himself and his friends at his State College apartment. / Photo by Alexa Weissberg 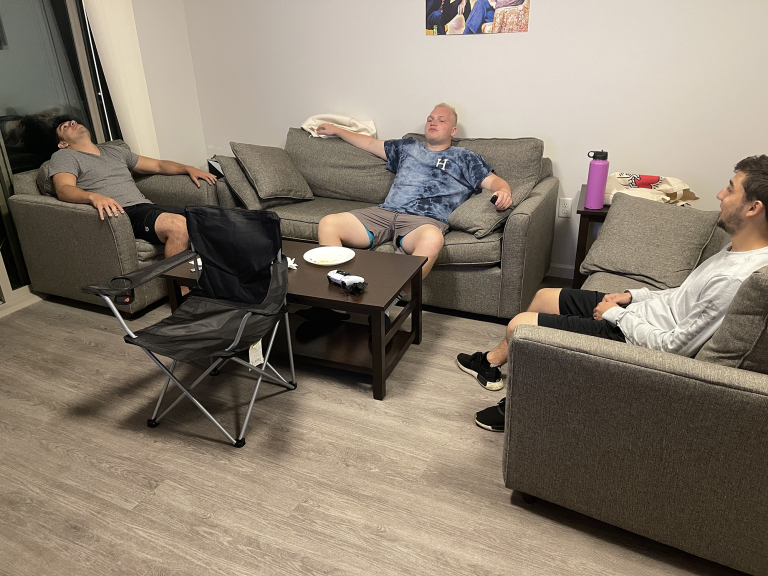 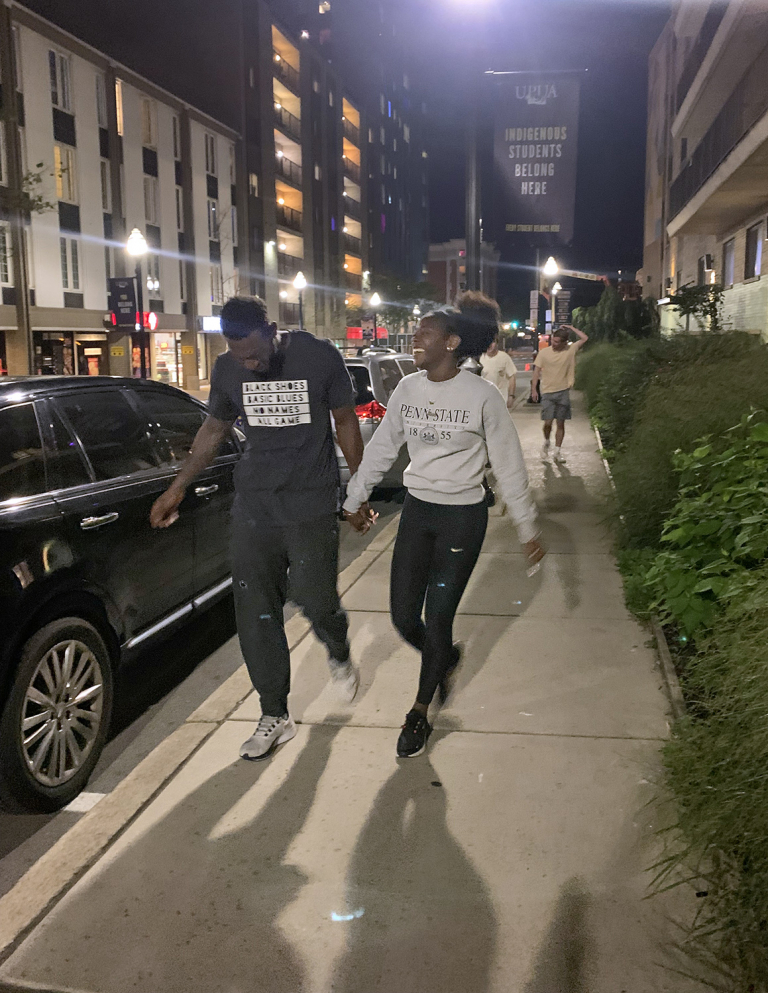 Brianna Lafalaise laughs at a joke made by Daniel George during a date. George said, “Masks are required when inside, if you are not wearing one outside it is safest to social distance.” / Photo by 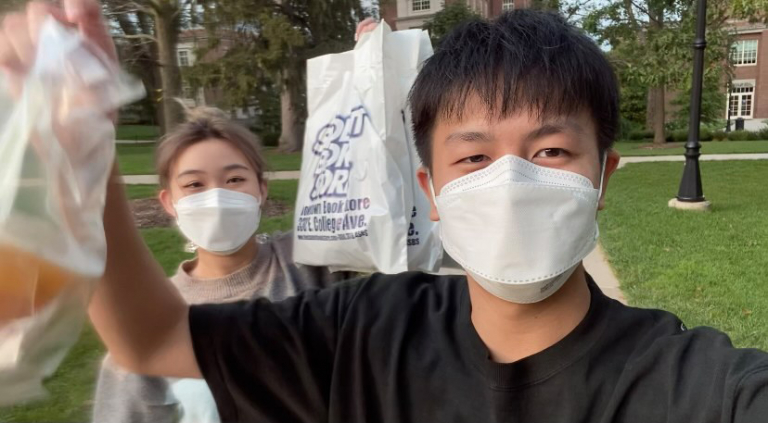 The roommates pick up food and get things they need from the store together. / Photo by Serene Kequin Yu 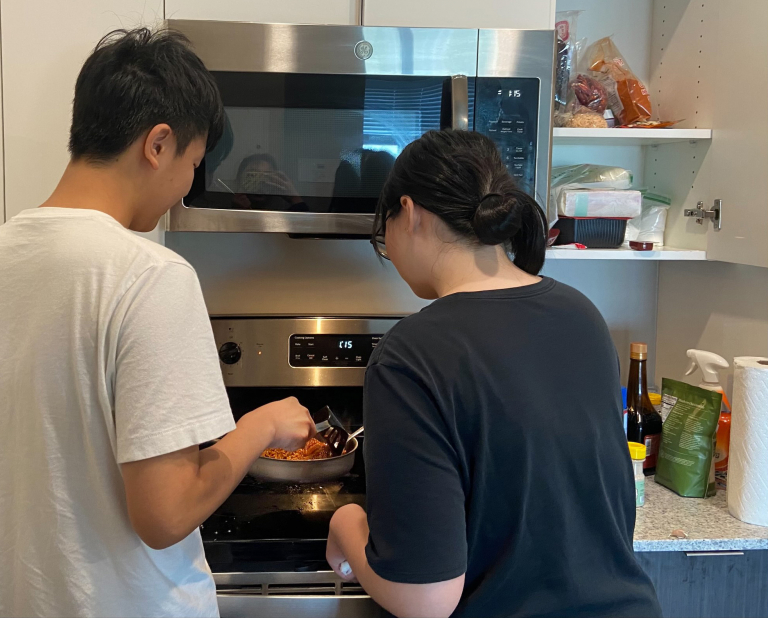 The roommates prepare lunch at home. They no longer eat outside and have started to cook themselves, learning they are good cooks. They eat together almost every day. The roommates say they are the few people that they feel totally safe to eat with. / Photo by Serene Kequin Yu 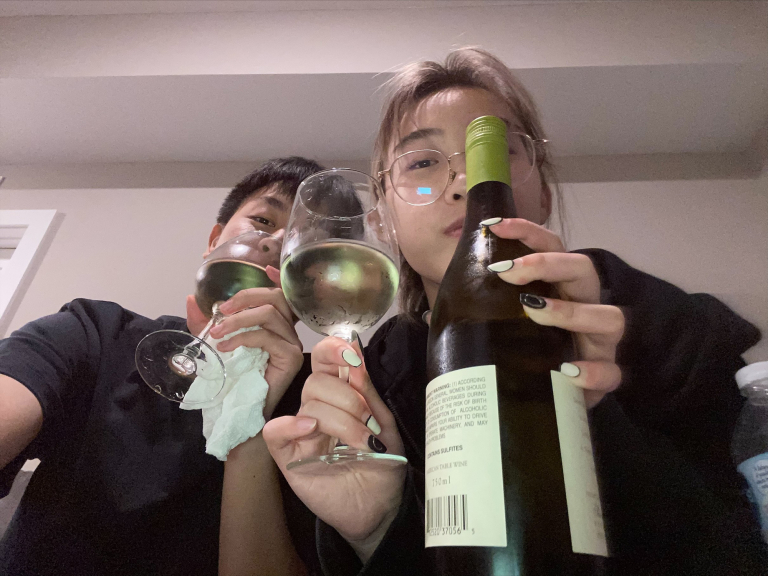 Drinking a glass of wine at home and talk about recent events with roommates is one of the safest way to release stress and have fun during this time. / Photo by Serene Kequin Yu 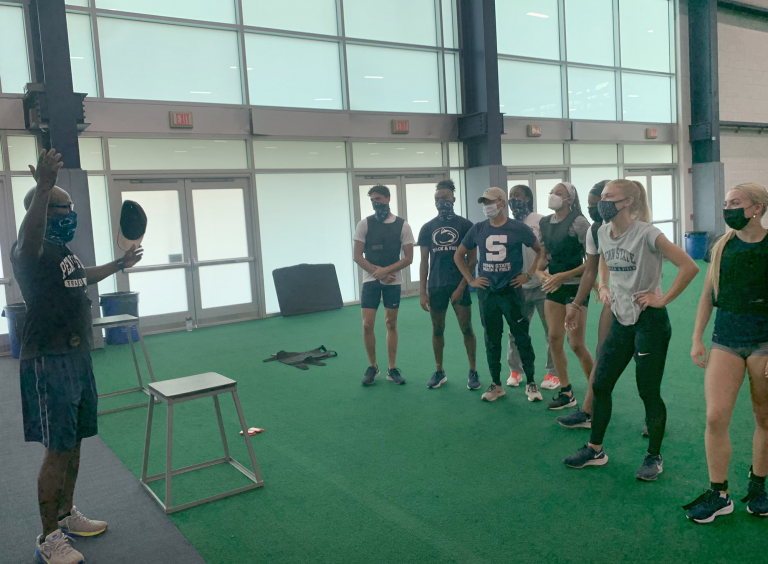 Erin Tucker, the Assistant Head Coach for Penn State Men and Women’s Track and Field, works with athletes at the Horace Ashenfelter lll Multi-Sports Facility. Penn State athletes are required to wear masks at all times within the building. Tucker says that he is just happy that he can be with his athletes in full capacity even if masks are required. / Photo by Amariah Thomas 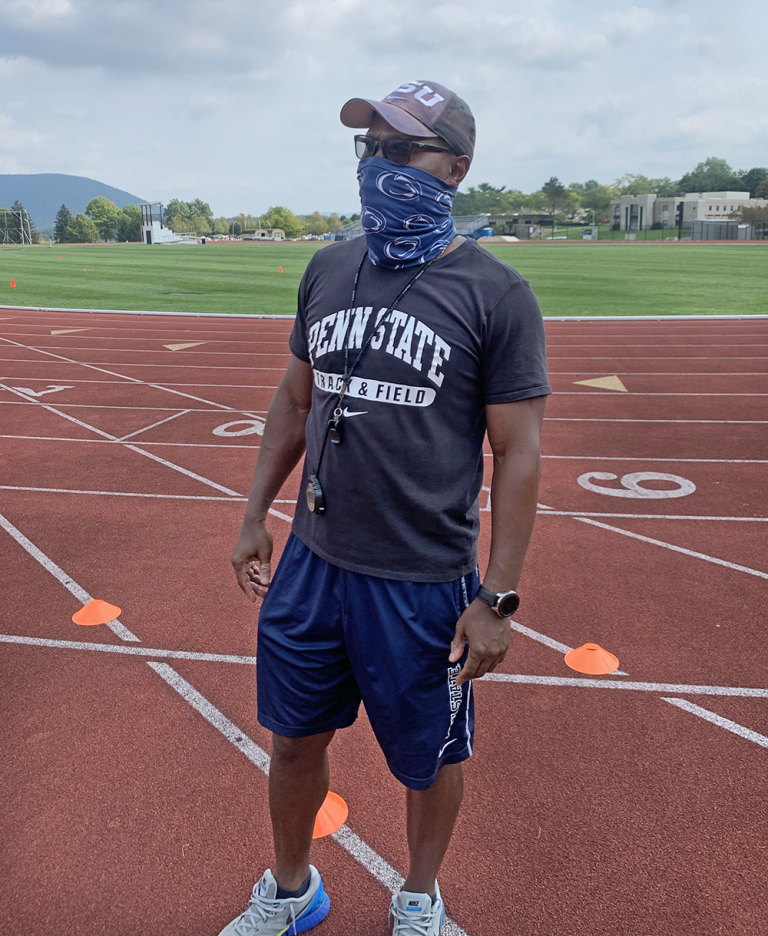 Erin Tucker, the Assistant Head Coach for Penn State Men's and Women’s Track and Field, said he is embracing being able to reunite with his athletes. “It has been 22 months since we have all been able to be together and I couldn’t be more ecstatic," he said. / Photo by Amariah Thomas 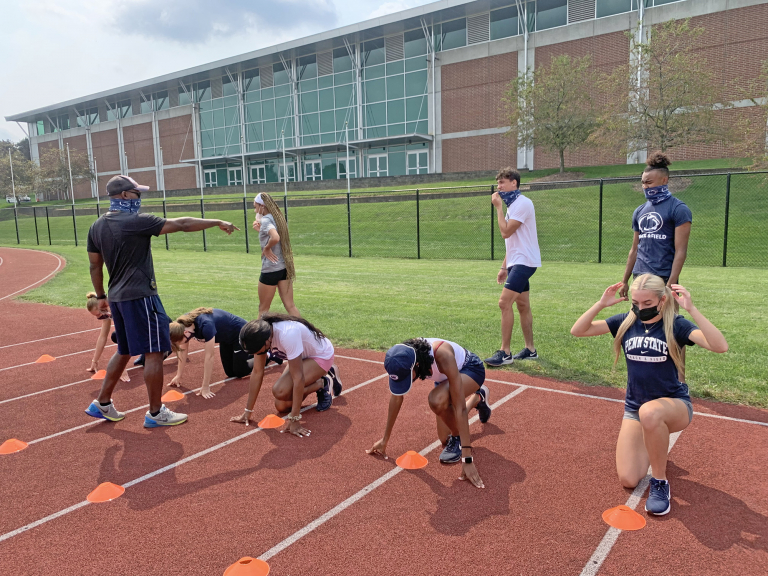 Even when conducting track practice outdoors, assistant head coach Erin Tucker said it is important to stay safe by keeping masks on, unless engaging in extenuating exercise. / Photo by Amariah Thomas 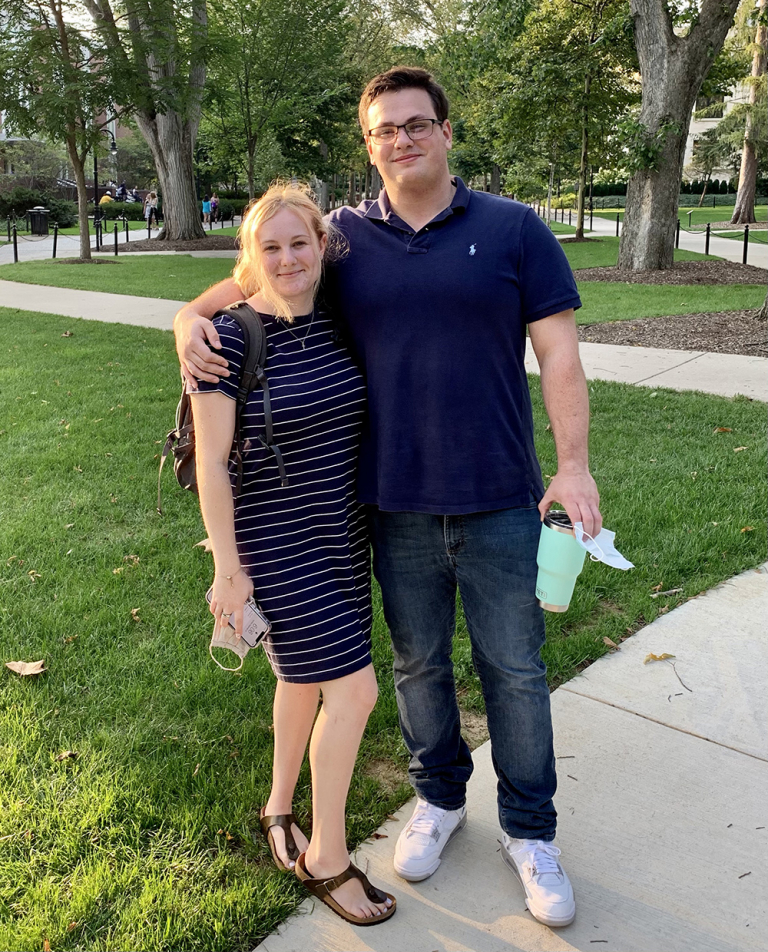 Madi Rice and Evan Flynn are celebrating their fifth anniversary as a couple this week. Both are third year students at Penn State. Rice is majoring in Labor and Human Resources. Flynn is majoring in accounting. The couple spends most of their time attending events with the Phi Sigma Pi honors fraternity. They also have student football tickets and plan weekly dates to beaver Stadium. With the Delta Variant spreading, they are careful to wear their masks indoors. But when they are outside, they said they are safe to go maskless. Since much of their time revolves around university events, the couple is exposed to the same group of people. Because of the relative safety of their pod of friends, they said they are not afraid to to spend time with each other at their respective apartments. / Photo by Brittany Bennett 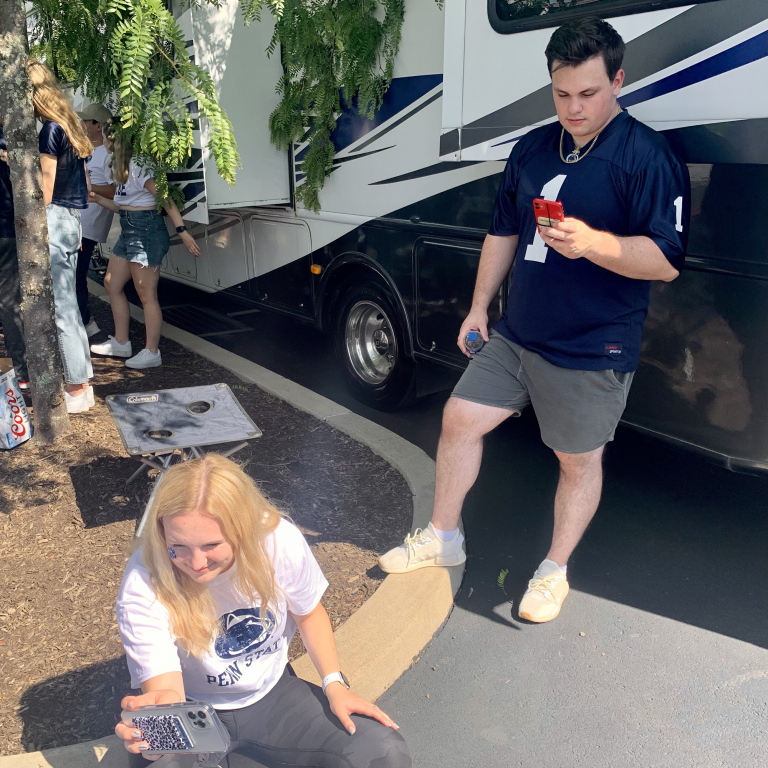 In Lot 18 of Beaver Stadium’s West Zone tailgating section, Madi Rice and Evan Flynn take a moment to see if they can get WiFi to provide friends with their location before the Ball State vs. Penn State football game. For the first time in two years, the Nittany Lions played in front of a real crowd of more than 105,000 people. The final score was 44-13. / Photo by Brittany Bennett 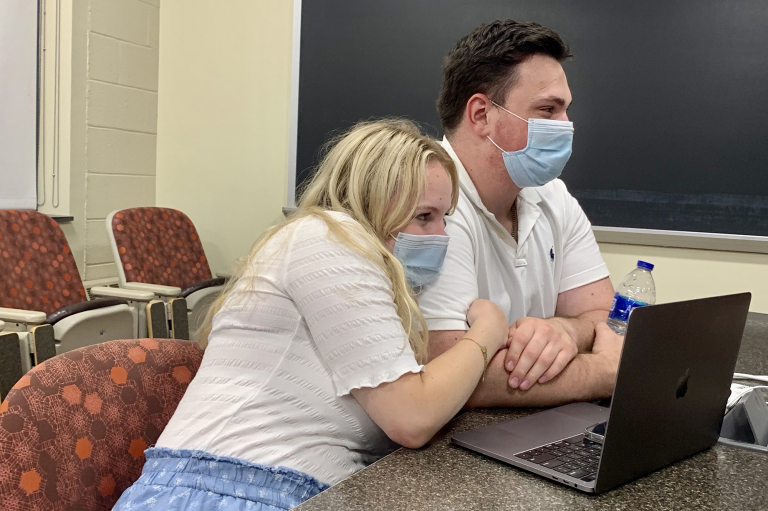 Madi Rice and Evan Flynn snuggle while waiting for the beginning of a Phi Sigma Pi National honors fraternity Final Words event. This is an event hosted by the Phi Sigma Pi that gives prospective members a chance to get answers to questions before receiving a bid into the fraternity. Phi Sigma Pi has been an active chapter since Oct 6, 1991 and returned to in-person meetings while following masking regulations. / Photo by Brittany Bennett