DUBLIN -- While the threat of an eruption from Iceland’s Bardarbunga volcano has caused concern about air travel in Europe, Penn State fans in Ireland are staying optimistic they’ll see some football and get home on time. 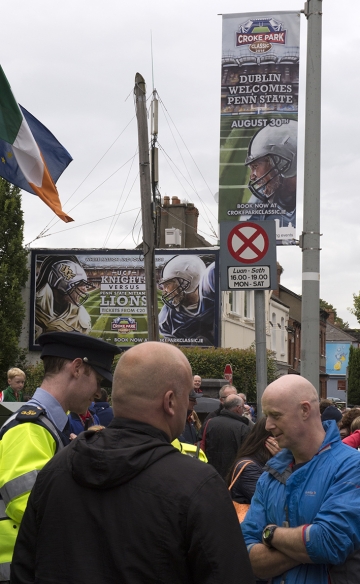 “We’re keeping a close eye on it,” said Dale Tepas of Rochester, N.Y., who is traveling for the game with his son Kyle, a Penn State graduate. “Maybe it will, maybe it won’t, but at this juncture the flights are fine. To my understanding, as long as the team leaves on Tuesday, there will be a game.”

The air travel alert issued by the Icelandic Meteorological Office was lowered from red to orange on Sunday, the second-highest possible in a five-point rating system. According to the office, due to a large number of earthquakes near the volcano, the possibility of an eruption cannot be excluded. The office retreated from its previous assessment that an eruption had occurred on Saturday under a glacier.

“I started following three volcanologists on Twitter,” Kyle Tepas added with a laugh, bags still in hand as he and his father walked down O’Connell Street to their hotel just minutes after landing in Dublin. “Every half an hour they give updates.”

While speculation continues about the possibility that the volcano could erupt, spewing tons of steam and ash into the air and disrupt air travel, Kyle Tepas and his father believe the odds are in their favor.

“I think the last volcano that erupted in 2010 was the perfect storm of conditions where they had this huge eruption, it lasted a long time, and they had a nightmare with the airlines,” said Kyle, a graduate from 2004 who now lives in Atlanta, Georgia. “I’m just glad to make it here.”

For Penn State fan and graduate Kim Albright, an Icelandic volcano threatening her travel plans is nothing new. Albright traveled to Europe in 2010, just one week after the eruption of the Eyjafjallajökull volcano in Iceland, which canceled over 100,000 flights and cost the airline industry an estimated $1.7 billion, according to the International Air Transport Association.

“I’m a seasoned volcano traveler,” joked Albright, who was sightseeing in downtown Dublin early Sunday morning with her husband Randy, another Penn State grad. “I think it’s ironic that four years ago when I was here, same thing. I’m like, ‘What? Another volcano in Iceland?’”

Bardarbunga did not make front-page headlines in the Irish press, but short reports were found in some papers.

Neither a story in The Sunday Times, written by its science editor, nor one in The Sunday Independent, by a reporter based in Iceland, mentioned the Croke Park Classic.

Rather, they focused on basic information on the eruption and local air traffic. The Times reported that one flight to London was told to alter its course Saturday, and that Iceland was declared a no-fly zone inside a specified radius around the eruption. 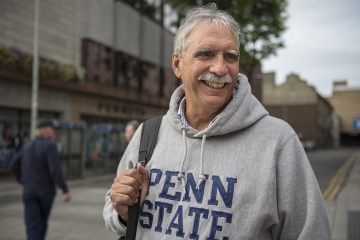 Kim and Randy Albright plan to enjoy their time in Ireland, even if the game happens to be canceled. The couple from Harrisburg, Pa., started making travel arrangements back in January, and having learned from their past experience with an international airline crisis, have a backup plan just in case.

“Well I guess we’ll have to train to the mainland (of Europe) and go as far south as we can to get away from it,” said Randy Albright. “We’re going to be optimistic.”

(C.J. Doon is a student in the John Curley Center for Sports Journalism at Penn State.)