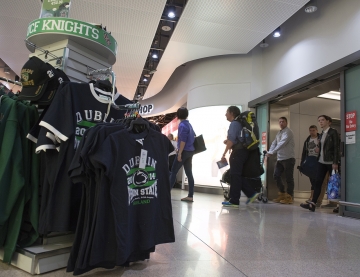 T-shirts are on sale just outside baggage claim, promoting the Nittany Lions’ matchup against their first opponent of the season, Central Florida.

Downtown, days ahead of the game, PSU faithful are getting their photos taken at local landmarks.

The catch: This is Dublin, Ireland, not State College, Pennsylvania.

So what gives? Why are UCF and Penn State playing their opener here next Saturday in the Croke Park Classic, a matchup named for the stadium where the game will be played?

The short of it is that a combination of circumstance and hard work by a small group of people on both sides of the Atlantic Ocean brought the deal together. To hear them tell it, it hasn’t been tough to sell the Irish or U.S. fans on the return of major college football to Ireland – a nation that has twice hosted the annual Navy-Notre Dame game, once in 1996 and again two years ago.

“I think it was very important that we were able to translate our passion for holding this game,” Croke Park stadium director Patrick McKenna said. “Both teams and both sets of officials from both colleges would be comfortable in the fact that we would replicate, as far as possible, a United States experience that they would be used to.”

‘An idea that kind of makes a lot of sense’

It was Steenberge who sat with McKenna and Gaelic Athletic Association Director General Paraic Duffy during the week leading up to the 2012 Notre Dame-Navy game. He wasn’t there for a casual conversation. Rather, Steenberge had an idea that could use his ties to Penn State to help both the GAA and a program in need.

“Meeting the folks at Croke Park, I knew they were interested in doing a college game,” Steenberge said. “Through our conversations, I said ‘Well, look, I know folks from Penn State, and the timing might be perfect.’ Because I knew they couldn’t go to a bowl game until after 2016 season.”

Indeed, the NCAA sanctions imposed after former assistant coach Jerry Sandusky was convicted of child sex abuse in the summer of 2012 prohibited the Lions from the postseason for four years.

By going to Ireland during the regular season, though, the program could reward its loyal fans and players with a game in an exotic location.

“Patrick (Steenberge) came to us with the idea and I felt that he could bring these two great colleges together,” McKenna said. “Penn State is a massive football program … with very, very passionate supporters.”

Steenberge made an initial call in 2012 to former Penn State associate athletic director Greg Myford to get the ball rolling.

It helped that both programs’ head coaches at the time, Bill O’Brien and George O’Leary, are of Irish heritage and quickly warmed to the idea.

“It was one of those times where I said ‘Hey, I think I have an idea that makes a lot of sense,’” Steenberge said.

McKenna told The Irish Times earlier this month that the GAA and Croke Park vetted Penn State regarding changes the school made in approaching child abuse accusations following the Sandusky case. Officials came away feeling good about extending an invitation to the Lions.

“It was absolutely something that we thought long and hard about,” McKenna told the paper. “We have a very strong child protection ethos and policy within the GAA. What we felt was that the college handled this very well.”

Penn State and UCF had agreed to a home-and-home series in February 2013, and the Knights were scheduled to play at Beaver Stadium in September.

But whether PSU would play a game at UCF’s 45,301-seat stadium or buy out the deal was unsure. Then Croke Park came along and, after some back-and-forth discussion, a deal was struck between Irish officials and the schools on July 1, 2013 before a joint announcement a couple of weeks later.

“I think, number one, it is going to give Penn State a lot of national exposure, which I think it already has with all the talk about (the game),” former Penn State Director of Athletics Dave Joyner said at the time. “The Irish are very excited about this. I think our fans are very excited about it, and I think it’s just a great way to give our football team and university a marquee place to play and a focus on us.”

Now, Croke Park is expecting the game to bring $30 million into the Irish economy, thanks mainly to an expected 16,000 U.S. visitors.

The only thing that has any chance of stopping the game is a volcano – the Bardarbunga volcano in Iceland, to be precise. Scientists believe Bardarbunga is poised to erupt. If it does, that could disrupt flights over the Atlantic – the teams’ journeys among them. Aviation is on high alert.

The plan for now, though, is move ahead.

“Over the past several days we have been talking with officials from UCF, the GAA and United Airlines, our charter provider. We continue to monitor the situation and maintain regular communication with all appropriate parties,” Penn State said in a released statement Saturday night.

“The safety and welfare of our student-athletes, staff and fans will be at the forefront throughout our discussions. At this time, we are continuing our preparations for the game and for the team to depart Tuesday evening for Dublin.”

UCF is taking a similar approach, saying through a spokesman it, too, is monitoring the situation and staying in touch with all relevant officials. 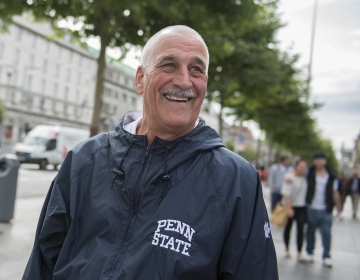 Fans already in Dublin don’t seem to be worried. It’s just more intrigue in a game with that already has a multitude of story lines: the first international game for both programs; coach James Franklin’s first game at Penn State; a report, denied by UCF, that Knights coach George O’Leary might step down after the game.

“I had season tickets for years,” said Bob Wolgemuth, a Penn State fan from North Carolina and arrived in Dublin on Sunday, six months after he decided to make the trip.  “It’s a good excuse to see Ireland and come see a Penn State game.”