PHILADELPHIA –– Dean Lake stood in front of one of this city’s most iconic landmarks Thursday morning, taking pictures, as dozens of other tourists climbed the 72 steps in front of the Art Museum, doing their best Rocky imitations.

Vacationing from his home in York, England, he was asked about the tenor of the politics he’s seen and heard in this country since his arrival.

“Over in the United Kingdom, we don’t get a lot of slandering in the news amongst politicians,” he said. “But I’ve noticed that when I turn on the news here, one’s going up against the other, sort of really criticizing and just being really awful to each other.”

That negative tone, as the presidential campaigns of Donald Trump and Hillary Clinton move forward, is what a number of people said they do not want to see come fall.

“I just really hope it won’t be a hot mess,” said Rebecca Colbert of Grand Blanc, Michigan. “I just hope it’s going to be as civil as possible.”

Colbert, her husband and daughter were taking a break from running the Art Museum steps. She said even after Clinton received enough delegates during Tuesday’s roll call at the Democratic National Convention, the party still seems to be divided.

“It’s already going to be divided, it’s always been divided,” said Colbert. “But I hope for the most part they both just focus and emphasize their plans.”

Standing in front of the Rocky statue, Nick Shimkin of New Orleans said he feared the fall campaigns would repeat what occurred during this year’s primary season and become “ugly,” “nasty” and “substance-less.” 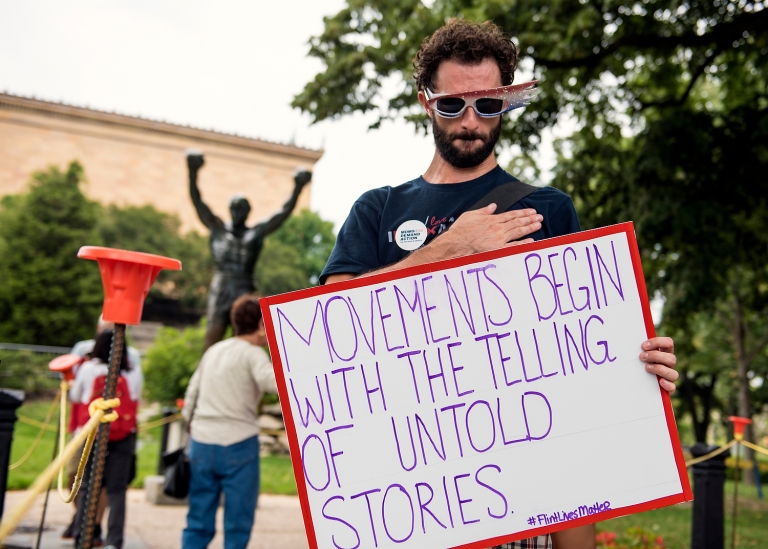 Nick Shimkin, 32, from New Orleans, stands with a "Flint Lives Matter" sign at the Rocky statue in Philadelphia on July 28, 2016, the last day of the Democratic National Convention. A teenager on the street gave it to him he said. "[Flint] would have never happened in a white majority area." (Photo by Gabrielle Mannino)


Lady Byrd, a Hillary Clinton supporter from Clearwater, Fla., echoed the feelings of Shimkin, but with a bit more optimism.

“When they come with the low, we come back with the high,” said Byrd of the bout between Republicans and Democrats.

A long smile never disappeared from Byrd’s face, even when she complained about the 90-degree heat. She said the presidential campaigns, thus far, have been positive for her simply because she’s voting for Clinton. 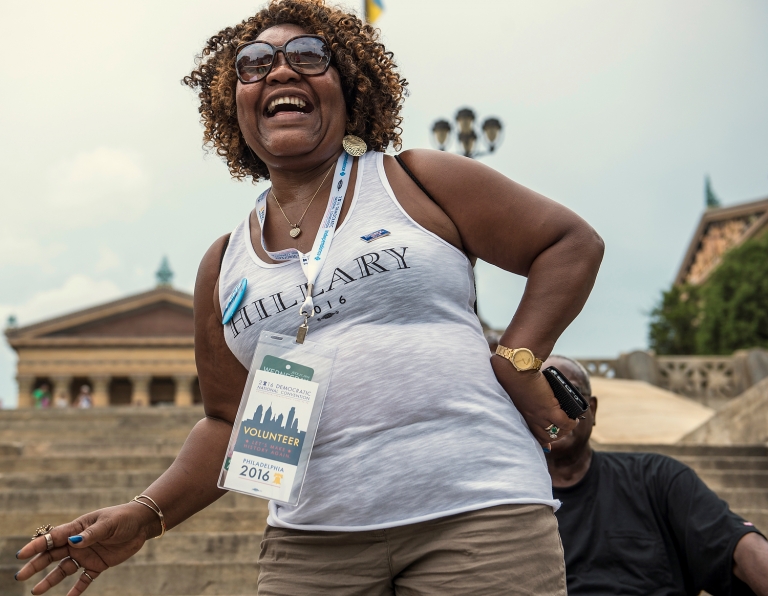 Lake said he hopes that Americans will experience a campaign of ideas rather than insults.
“I have come here and I have been so surprised by seeing the news,” he said. “They have really been at each other’s throats, really putting each other down – defamation of character rather than talking about policies.”