Story posted May 6, 2016 in Greece by Carley Mossbrook.

ATHENS – Hundreds of families crowd a ferry terminal at the Port of Piraeus on a breezy afternoon. Crying babies can be heard from every direction while Fariba Shujaee, 25, sits cross-legged in a far corner tossing balloons with her two children. 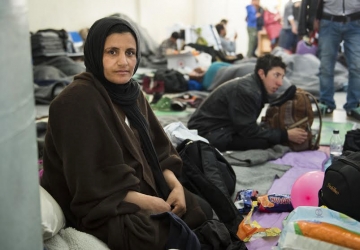 Fariba Shujaee, 25, of Afghanistan, sits on the floor of a ferry terminal at Piraeus port at then height of the refugee crisis in March, 2016. Shujaee is one of many pregnant women living in refugee camps throughout Athens. (Photo by Haley Nelson)

A five-by-five foot square of cold concrete floor covered by a thin blanket has been home for her and her family since they arrived at the port as part of the tidal wave of people who have landed in Greece – part of the largest movement of migrants and refugees into Europe since the end of World War II.

Like hundreds of thousands before her, Shujaee and her family share a common story of hardship, danger, privation and tragedy.

In Shujaee’s case, she and her family struggled nearly 2,500 miles over land and sea from Afghanistan. Not all of them made it. Her husband and mother-in-law simply vanished into the Mediterranean one night, presumably lost at sea.

But unlike most, Shujaee faces a greater challenge – she is eight months pregnant. Already the sole provider for her two sons, she will soon bring a new life into a world growing increasingly uncertain for migrants and refugees seeking the safety of Europe.

There is no precise data on the number of pregnant women who arrive as part of the mass migration, but many are not as lucky as Shujaee and her baby who made it to the relative safety of a refugee camp.

In September, a newborn boy died after a dinghy full of Syrians capsized while travelling from the Turkish coast to the Greek island of Agathonisi. Two years prior, the bodies of an Eritrean woman and her newborn were found in the Mediterranean Sea following a similar tragedy. The Italian Coast Guard found the two still attached by the umbilical cord. 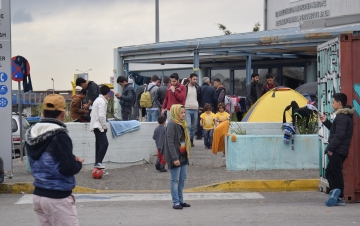 Refugees gather outside of a ferry terminal at Piraeus port on a chilly day in early March. Thousands of men, women and children reside inside the building or in tents along the perimeter as they await border closures that are preventing them from moving into northern Europe. (Photo by Carley Mossbrook)

Those who survive arrive at Europe’s doorstep needing not only food, shelter and clothing, but basic medical care.

“Mostly, in general, the babies are OK,” said John Diakomanolis, a doctor who has been volunteering at Piraeus port’s Gate E1 to screen the pregnant women. But perhaps five out of 100 face complications.

“Usually due to the long trip, to walking,” Diakomanolis said. “The pregnant women walked a lot and there is distress to the fetus.”

Others are ready to deliver as soon as they arrive at the port.

One mother could not make it to a local hospital and her baby was delivered in the unit, Diakomanolis said, pointing at a desk cluttered with bottles and packages of medicine.

Despite the hardships and discomforts that come with camping on the floor of an overcrowded, damp and drafty ferry terminal, pregnant women and their families can rely on decent medical care thanks to impressive efforts by NGOs and volunteer groups working at the port.

Doctors, pediatricians and nurses are available at all times. Pregnant women get checkups, ultrasounds and medicines, if necessary. A gynecologist works at a nearby gate, and visits Shujaee’s refugee center every two days with a van.

Outside, an ambulance and doctor standby, ready to rush anyone with urgent needs to a hospital.

For the most part, the most serious traumas seem to be psychological, both from the long and arduous journey and from the violence and destruction they survived in their homelands at the hands of the Taliban or ISIS.

Shahana Bhaduri, a volunteer with Boat Refugee Foundation of The Netherlands at the port, recalled one woman who arrived in Greece with deep feelings of guilt that her baby had survived the journey while others had not.

Bhaduri said she believed the woman’s baby survived because she had a doting husband.

“He was totally in love…  Her husband was putting her on a pedestal and making sure everything is okay. So it was the extra care being taken ...” Bhaduri said. “It was sad to hear of the other women whose pregnancies didn’t make it.” 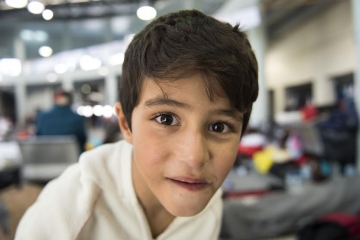 Fariba Shujaee’s 5-year-old son takes a break from playing catch with his mother, brother and other children at a makeshift refugee camp at Piraeus port in early March. Soon, his mother will deliver a new brother or sister for the young boy. (Photo by Haley Nelson)

Shujaee had to survive her journey, or at least much of it, without a husband.

“I lost my husband at sea – my husband and mother in law,” she said. “It was during the night, I don’t know what happened to them.”

When Shujaee and her family set out from their home in Baghlan Province in Afghanistan, Greece was not the destination they had in mind. Rather, they were heading to Iran seeking medical attention for her husband’s sister.

The girl, Shujaee said, had gone mad after witnessing her sister’s murder at the hands of the Taliban.

When the treatment they sought in Iran didn’t help her sister-in-law, Shujaee’s family decided to push on to Germany for more answers and a chance at safety from the dangers of her homeland.

“The journey was full of difficulties, climbing mountains at times,” Shujaee said. “I was fearful because I fell down many times ... the walking was too much that I had pain in both sides.”

They travelled by truck and foot to Turkey before crossing the Mediterranean to the Greek Islands. There, ferries transported the refugees to Piraeus.

But shortly after arriving in early March, Shujaee’s hopes for a better life suffered what may prove to be the most serious blow of all – word that Greece’s European neighbors had closed the northern borders and were giving priority to refugees from war zones in Syria and Iraq.

Now, she is one of thousands of refugees left to wait and wonder what the agreement on refugee asylums between the European Union and Turkey will mean for them. 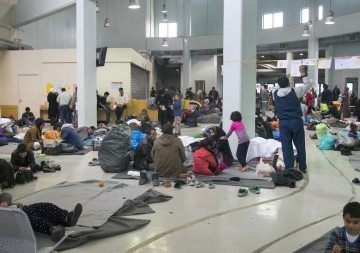 A thin blanket spread over a five-by-five foot square of cold concrete floor is the temporary home to many refugee families waiting at a ferry terminal in the Greek port of Piraeus for word of their future. (Photo by Carley Mossbrook)

The border closures have transformed parts of Athens’ bustling port into a small city for the refugees and forced non-profits, NGOs and volunteers to scramble to house people disembarking from the ferries.

Three of the 12 ferry terminals and a dilapidated warehouse were converted into camps and filled to the brim with migrants from northern Africa and the Middle East.

Inside the terminals, thousands of refugees share a handful of bathrooms or portable toilets, and bathe themselves and their children with cold water from the faucets.

Some of the refugees choose to move on to other camps closer to the heart of Athens. In these locations, many of the refugees sleep outside in tents, though shelters throughout the city are making room for the foreign migrants, especially those with young children.

Some non-governmental organizations are relocating pregnant women to shelters with better sanitary conditions. They are also placing the new mothers in hotels after they give birth in local hospitals.

Still, Shujaee and other pregnant women are left to call the unpleasant conditions of Gate E1 home.

There, dozens of volunteers can be found on any given day. Some swept debris from the floors inside the terminal. Others kicked soccer balls with kids on the asphalt parking lot and a few handed out oranges to young children.

Holding it all together are volunteers like Diakomanolis, the Greek doctor, and Bhaduri, the American aid worker.

At the refugee center’s medical clinic, Diakomanolis fixes a sheet of medical paper across an exam table. Doctors, nurses, and a young American interpreter scramble around him plucking medicine from shelves lining the 20-by-20 room.

“We have an ultrasound here,” Diakomanolis says. “Just to see how the baby is, if it’s viable, if it’s alive.”

On this day, two pregnant women step into his unit within a 20-minute period.

A young woman, dressed in a black wool coat and headdress, is guided toward the table.

In Arabic, she tells the doctor she is from Syria and she is about six months pregnant. She hasn’t visited a doctor since she left weeks ago and is wondering how her baby is doing.

Diakomanolis reaches behind him and pulls an outdated ultrasound machine towards the table. He asks her to pull her coat up so he can see her stomach.

“We’re trying to find the heartbeat of the baby. Maybe we won’t,” he says. “It’s not the best technology to see the sex of the baby [either].”

He runs the wand across her abdomen until the shape of a baby appears on the sonogram.

“That’s very good!” he says pointing to the heart. “I will try to find if it’s a boy or girl.”

She tells him she thinks the baby is boy. A doctor in Syria told her that it may be.

Diakomanolis confirms it is and a smile crosses her face.

With her nerves now settled, he helps her from the table and offers her advice about her diet and body care, a simple health plan all of the doctors offer pregnant women – stay hydrated, eat meat, keep clean and take the prenatal vitamins provided.

She buttons her coat and is whisked away to the administrative desk on the other side of the room.

As soon as the woman exits, the second pregnant woman takes her place on the exam table.

She is 20-years-old and pregnant with her second baby. Her last exam was 10-days ago in Syria, but she was worried about the baby’s condition after the boat ride.

Diakomanolis is able to show her the sonogram of the heartbeat and sex of the baby – another boy.

“He is a very healthy Arab!” Diakomanolis exclaims. “And his mother is okay.” 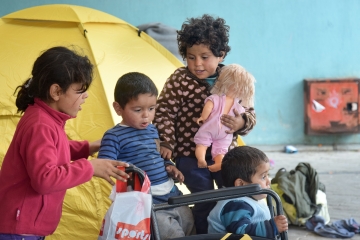 A group of toddlers play outside of a ferry terminal turned refugee camp at Piraeus port in early March. Women and children are considered most vulnerable and account for over 60 percent of refugees fleeing in the current migrant crisis, according to the UN. (Photo by Carley Mossbrook)

For Shujaee, though, such moments are bitter sweet.

When she visited the medics unit after she arrived, a doctor told her the baby was healthy, she said.

“Are you hoping for a boy or girl?” she is asked.

Shujaee smiled and said she is hoping for a daughter, but would be completely happy with another son. Even though she has had an ultrasound, she said she preferred not to know the sex of her baby. Likewise, she is not indulging in the joyous exercise of choosing a name for the newborn.

Shujaee’s eyes glistened and she looked down at her bare feet in silence. It would be “too sad,” she said, without her husband there to share the happiness.