HAVANA – Dreadlocks down his back and a stern look on his face, Kadir Peña Mercado takes a drag on his cigarette – every bit the tough guy image cultivated by rappers around the world. 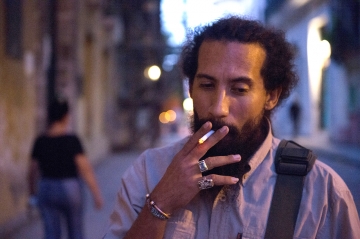 Yet, it doesn’t take much coaxing for Mercado to pull out his cell phone and proudly show a video of his 5-year-old daughter playing outside.

“Her name’s Aixa Amira. It means princess,” he says.

Like aspiring musicians everywhere, Mercado is struggling to support his family with his music. But that climb is a little bit steeper in Cuba, where a musician’s desire for self-expression can often collide with the government’s determination to control the arts.

The 33-year-old Mercado’s lyrics tend toward the political and do not shy away from speaking out on sensitive issues in Cuba like racism, poverty and the future of socialism.

“Cubans live a life of slavery…they are victims of the system,” go the lyrics from Mercado’s track, “Living in Chains.”

It’s lyrics like this that put him among the underground rappers – artists who view music as a powerful form of social activism.

Due to their politically and socially-charged lyrics, underground rappers in Cuba often face difficulty getting their music heard. These artists struggle finding venues, radio airtime, equipment and money compared to more commercialized genres.

This leads to a wrenching internal decision underground rappers must face: curb their lyrics so their music can be played, or keep their free speech and face artistic isolation.

Rapper Adrian Espronceda, who goes by the stage name, El Ejercito, said although there are not many venues willing to let underground rappers perform, some individuals are willing to provide a space, like a house, backyard, small outdoor stage or a park. 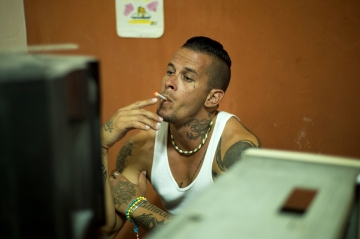 However, hosting or even attending an underground rap concert can be risky, he added.

“This always happens -- you’re at a concert and usually the police are there, but they don’t do anything,” Mercado said. “But government agents are there and they film you and follow you [to figure out] what you’re doing, what you’re talking about so that they can know all your movements to see what you’re up to.”

Mercado, who grew up in a cash-strapped, yet cultured family, was exposed to a variety of music genres, like opera, jazz, rock n’ roll and rasta rock.

As a young boy, he developed an appreciation for music that had purpose.

Rap became an art form for Mercado. His lyrics – what he calls poetry – are meant to inspire others.

“In my case, I don’t use rap as a way of living. It’s more of as a way of expressing myself,” Mercado said. “I use art and music as a support for what I need to say.”

Like Mercado’s music, everything in his life has a deeper meaning.

His attire showcased some of his favorite musical influences – his t-shirt featured LA-based rap metal band “Rage Against the Machine,” his bag sported a Bob Marley pin.

On his stomach is a tattoo that reads, “Orgullo,” the Spanish word for pride. Tattooed on his chest are stars, which signify light, stemming from the poem “Yoke and Star” by Jose Marti, Cuba’s revered poet.

“No matter how much people criticize your ideas you have to triumph and be true to yourself,” he said is a piece of wisdom he learned from Martí’s poem.

This attitude is a common theme in the underground rap movement in Cuba today.

Rap first made its way to Cuba in the 1980s from Miami radio stations whose signals reached the island. These broadcasts exposed the Cuban youth to American hip hop artists, like Biggie Smalls and Talib Kweli.

Because rap was such a new concept to many Cubans, their music originally mimicked the sounds of American rappers they heard on the radio.

But soon after the collapse of the Soviet Union, Cubans began making rap their own, writing about their frustrations and injustices they faced during the Special Period when many Cubans were left in an economic depression.

In an effort to co-opt the booming underground rap movement, the government formed the Cuban Rap Agency in 2002. The agency provided rappers with record labels, equipment, Internet access and recording studios.

However, Espronceda, age 44, said the state-run agency’s main goal is to commercialize rap – to pick rappers with lyrics that aren’t as heavy. Artists can’t criticize the government in their lyrics, he said.

Artists, like Alexei Jacomino, a DJ in a rap group called “Judentud-Reverde,” said the agency forces rappers to compromise their lyrics. 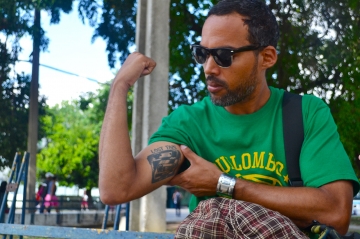 “They want you to change your lyrics and manipulate you. You can’t have political or social lyrics. You have to sing favorite Cuban songs because this is a socialist and communist country,” Jacomino said. “There’s no freedom of expression. They’re afraid here in Cuba people will rebel.”

Rapper Carlos Bravo, however has a different idea about rap. Bravo, who’s in the rap trio “Charlie Mucha Rima y Los Niches” is a member of the agency.

He said his group is trying to make a different type of hip hop – one that mixes rap with other elements of popular Cuban music, like reggaeton.

“We are trying to make a hybrid in terms of changing the structure and the form in which hip hop has been done during these times in Cuba,” Bravo said. “Basically, it has always been marked as a genre with only social lyrics and that’s not easy to digest.”

In “Charlie Mucha Rima y Los Niches,” the group doesn’t only talk about the negative aspects of Cuba, but also the positives the country has to offer.

“Cuba has one of the most capable people,” Bravo said. “The generation after 1959 is well educated – nearly all Cubans have some level of expertise in a certain area of study”

He said, while there are good parts about being in the agency, there are also bad. The Cuban Rap Agency, he said, still doesn’t fully understand how to promote rap music because it didn’t form with the initial intent of helping artists succeed – it formed because of the force of the rap movement.

Similar to Jacomino, Mercado said he wouldn’t want to be a part of an agency that’s run by the state because it limits his self-expression.

“It’s killing what my art represents,” he said. “I would love to have an agency that really supports my art and promotes what I do, but that’s not the one we have right now.”

Instead, Mercado produces his own work in studios that have been hand-built -- usually inside residential houses as a way to avoid taxes. There are a lot of high quality studios in Havana, he said, but it usually costs the equivalent of five CUC to produce a single track – a huge bite out of the average Cuban’s monthly salary.

Mercado’s studio is in a run-down area of Old Havana where the street is dimly lit and the road is falling apart. Outside, are children playing with sticks or rocks or whatever they can get their hands on. The studio sits on the second floor of the tiny house – the tight space becoming even more apparent as the hot Havana air begins to creep in the only window.

Equipment is scattered messily throughout the room – there are mics, speakers, computers that were outdated 15 years ago.

On the computer, Mercado pulls up a video of him performing outside at a rap festival in front of a small crowd.

“I’m going to talk about what people don’t want to hear,” he shouts to the crowd in which they respond in cheers.

His lyrics certainly aren’t topics most Cubans openly speak about. He raps without holding back, singing about the suffering he sees on a daily basis.

“I work today in the streets of my country

I hardly support myself but I live, I share and I’m not completely happy

Wherever I go by, I see sad faces

Trying to conceal their discontent with a mask of happiness

As I suffer and I know what they’re feeling

You can’t hide the bitter scars of time

Today more than ever revolutionary behavior is necessary”

At the end of the day, Mercado’s career costs him more money than he earns.

He records his own albums, prints the album, purchases the album and then he takes his work to the streets to sell. He usually ends up giving his work away for free.

If he wants Cubans to hear his music, to hear the meaning behind his lyrics, he can’t charge them because they can’t afford it.

“I work for free because I love it,” he said.