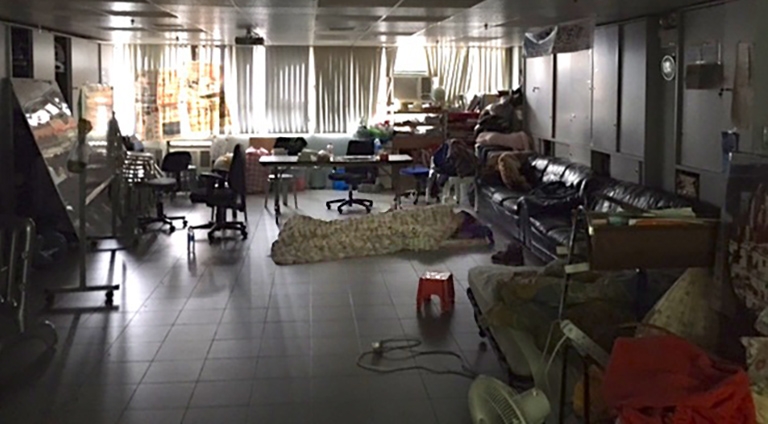 A slow morning – and time for a nap – in the Hong Kong Federation of Students offices. Photo by Matt Allibone


HONG KONG – At 10 a.m. on a cloudy Tuesday in March, the only person at the headquarters of the Hong Kong Federation of Students is a young man sleeping on the floor amid piles of newspapers and postcards.

The office for the organization which houses the brain trust of the Umbrella Revolution and Occupy Movement is otherwise silent.

But that wasn’t the case last fall. 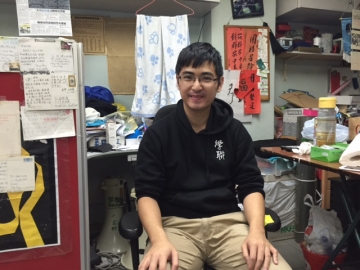 Alex Chow, a 24-year-old student at Hong Kong University, says he spends most of his time in the Hong Kong Federation of Students Office. Photo by Matt Allibone

“Almost every day, afternoon or night people were meeting here to discuss what was the current situation,” said Alex Chow, a leader of the movement. “They would analyze, to make connections with different organizations, so lots of dynamics happened here.”

Today, however, many of those dynamics seem to have come to a halt. Four months after their protests were the focus of world attention, activist students in Hong Kong are unsure of what to do next and their movement seems rudderless.

Though many students interviewed maintain that their goal for free elections and democracy in Hong Kong has not changed, some of them said their hope for that future is steadily dwindling, and it is difficult to tell where the movement will go with Hong Kong’s future most likely in the hands of communist China.

Chow, a thin 24-year-old, said he senses defeat among many of his fellow students.

“Hong Kong people are in a struggle,” said Chow. “They also struggle because some times, there is lots of frustration coming out. After the whole movement, Hong Kong has to find a new way to position herself.”

He described Hong Kong students in the aftermath of the Occupy movement as being “very depressed.”

“There is a lot of anxiety,” Chow said. “Lots of negative emotion because the reality is we do not enjoy high autonomy. Lots of things are controlled by Beijing. Hong Kong people are simply secondary citizens.”

The police cleared the streets of protesters in December. Students then went back to their daily routines, and there is no clear plan for restarting the movement

Having been there so long without progress, some students said they were fine with coming up with a new direction while others argued they should stay the course.

Cleo Tse, a 23-year-old marketing executive and recent graduate of Hong Kong Baptist University, said that efforts to restart the movement seem to be happening more online than in person. It has been hard to create anything substantial because students don’t agree on a plan.

“It’s complicated,” said Tse. “I know there are students that want to do something. Like people are still trying to promote the idea. The focus has moved to social media. It’s on the level of a marketing thing.”

Every student interviewed for this article, including those studying in Hong Kong who grew up under the communist regime in China, agreed that the ideal form of government involves free elections.

At the same time, some Mainland Chinese students are having a hard time connecting with the idea of the Umbrella Revolution, even if they support the goal behind it.

For some, the protests against China’s government has stirred up fear in what could happen to them if students from Hong Kong discover they’re from China. Since most Chinese and Hong Kong students are distinguishable based on whether they speak Cantonese (Hong Kong) or Mandarin (China), those from the mainland are uneasy about future rallies.

“When we go to see these protests, they say something anti-mainland government, they say that the communist party is evil and we just feel it is offensive,” said Jason Song, a 23-year-old graduate student studying journalism at Hong Kong Baptist University.  “We are scared in that moment, surrounded by thousands of Hong Kongers, to speak Mandarin. If we speak Mandarin, we represent, ‘Oh because of him, Hong Kong loses democracy.’

“You suddenly realize it’s not about Hong Kong’s democracy, it’s like people against each other. Two groups, one is Hong Kong, one is people like us, from the mainland. We don’t feel like it’s our fight for democracy.”

Song said some of the resentment from mainland students towards students in Hong Kong is related to the perception of some of them being lazy and unwilling to work.

“I think democracy is a good thing for Hong Kong, I want them to get it,” said Song. “But it also is true that some students [care about] Occupy Central but are not working very hard. They don’t care about studying. Compared to their older generation, they are weak.”

Christian Chan, a psychology professor at the University of Hong Kong who specializes in community and political psychology, said the reality is much more complicated. He argues that the frustration among Hong Kong students goes well beyond them being angry or just wanting to join a group.

Chan, who has volunteered therapy services to protestors, said that students were further influenced to join the Occupy movement because of other issues in the city that they blame the government for, such as rising costs in housing and the increase in poverty.

“I don't dare to explain away the movement as the result of students' desire or need to belong,” Chan said. “It is not hard to see injustices in Hong Kong, from housing cost to disparity. As these big issues become harder and harder to resolve, young people might feel they have less and less control over their own lives and destiny.

He added that students are convinced that the government has not developed or pushed for policies that protect the middle class.

Still, even students from Hong Kong like Tse said that she knows some students who went to the protest sites at first just to experience it or because they felt pressured to go. But she added that all who participated ultimately had Hong Kong’s best interest at mind.

“I think the people that come out it’s because they want to fight for democracy,” said Tse. “From my perspective, it is not a good thing for me to be sitting at home, watching TV, scrolling through Facebook. It’s coldblooded if you sit at home doing nothing because everyone is doing something for you.”

And some mainland students joined in the fight. Joyce Liu, a 22-year-old journalism student at Hong Kong University who was raised in Beijing, said she initially disagreed with the protesters.

After witnessing the movement and covering it as the student editor of a documentary on the Umbrella Revolution for MSNBC, she came to sympathize with the local youth.

Liu is aware that most people back home, including her parents, don’t support her for taking these views. She feels like many of her fellow mainland students don’t get involved because they are afraid of how their families and friends will react.

“Maybe I’m the minority,” Liu said, adding, “Hong Kong people totally changed me. My parents say that, ‘You are brainwashed.’ I can understand my parents, but I think the only way to solve the problem is to tell them what’s really happening.

“I don’t think [Chinese students] are against it, they just want to keep silent.”

Still, a clear divide between students from Hong Kong and those from the mainland persists.

Students from both sides agree on this, however: Free elections aren’t likely to happen soon. While the Hong Kong government announced a new election plan on April 22, very few changes were made and the Chinese government still has a large influence on which candidates are chosen.

According to Tse, most students know democracy is not a likely achievement, but they believe it is worth fighting for anyway because it’s the right thing to do.

“It was a gesture we had to make, to show the government we really wanted something,” Tse said. “We actually understand that, the government will not change. It’s disappointing, but we know that if we step back, we will never step forward. So everyone has to hang in to that.”

Tse said she isn’t sure whether she will continue to live in Hong Kong or will eventually move somewhere in Europe with her boyfriend, who is Swedish. Others like Chow remain more optimistic about the future.

Chow still spends much of his time in the quiet headquarters of the Hong Kong Federation of Students, hoping the action will pick up again. He is aware that things may seem bleak right now, but he also feels like the youth of Hong Kong have already weathered the worst of the storm.

“For me right now, it is a process,” said Chow. “I’m still positive towards the change of society here. Nothing was more worse than the year before, but if you can get through it than that means it’s just a matter of will you act.”

The Federation has existed since 1958, when Hong Kong was still a British colony. The official sign is spelled out in English and Chinese. Photo by Matt Allibone
Tweet

Matt has completed internships at GoPSUsports.com, StateCollege.com and Comcast SportsNet Philadelphia during his time at Penn State. He will be starting his journalism career after graduation at the York Daily Record.