Story posted May 6, 2015 in Hong Kong by Shannon Sweeney.

Statue Park, located near the Central Mass Transit Ralway (MTR) Station, is a popular spot for Hong Kong's domestic helpers to socialize and interact with friends. Photo by Shannon Sweeney


HONG KONG — On her one day off a week, Amy Mendoza spends the day at the Wan Chai Chapel of the Church of Jesus Christ of the Latter-Day Saints. She begins the day in prayer, but stays on to take advantage of classes the church offers in baking, piano and karate.

The other six days, Mendoza wakes up at 6:30 a.m. in a small bedroom at the apartment of her employer in Laguna City, about eight miles away from the Central neighborhood of Hong Kong.

She prepares breakfast, takes her employer’s six-year-old child to school and runs errands through the winding market streets, picking up fresh produce for dinner. She ends her day after she takes the child to ballet, piano and ping pong. 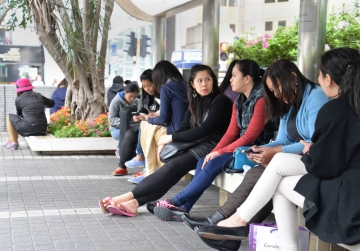 Domestic workers have one day off each week, which is usually on Saturday or Sunday. That provides them with an opportunity to meet friends around the city at places like the Central Mass transit Railway (MTR) Station Exit K in Hong Kong's Statue Park. Photo by Shannon Sweeney

The life of a domestic helper in a city 800 miles from her native Philippines was not the life Mendoza envisioned when she graduated from college with a degree in accounting.   But it is the life that she finds necessary to support Gean and Michelle, her two college-bound kids back home, and to put savings aside for the grandchildren she hopes to have one day.

“Basically, I came [to Hong Kong] for the employment,” Mendoza said. “The unemployment rate in the Philippines is high, even if you are a college graduate. So it takes a lot of time to get a job and good pay.”

Mendoza, 47, is one of the about 175,000 Filipino domestic helpers in Hong Kong, and part of a workforce of an estimated 2.3 million men and women from the Philippines who toil as nurses and nannies, construction workers and waiters, entertainers and teachers, far from home in the Middle East, in Asia and in North America.

They send home an estimated $24 billion a year – as much as the Philippines earns from its leading export, electronics. This money – called remittances – is essential in keeping the Philippine consumer economy afloat.

But the cost is high to both the workers like Mendoza and to the Philippines itself.

Mendoza sees her children only a few times a year. Experts say that parents who work abroad often leave households filled with heartbreak, broken marriages and children who no longer recognize them.

Mendoza said that when she first began working in Hong Kong she was able to get home only once every two years. Now with a new employer she said she has a chance to get back home whenever her employers are on vacation and don’t need her.

“At first it was really hard,” she said.  “I wasn’t used to being separated from [my children.]  Now, it’s just okay.”

Caroline Theoharides, a professor of economics at Amherst College, who has studied the issue, said this separation is the main drawback of overseas employment.

But there are also many positives — children with overseas parents are able to save more for school, and they are motivated by their parents to become educated for a well-paying job.

The Philippines is the top provider of domestic workers in Hong Kong, according to the Hong Kong Census and Statistics Department. This provides a large and relatively skilled labor pool for Hong Kong families who want domestic help.

And because of their caring nature, proficiency in English, and their high levels of education, Filipino workers are valued in Hong Kong.

“[Mendoza] helps with the housework all around, allowing me more time to focus on my work,” Dr. Roselyn Du, Mendoza’s employer,  an associate professor at the Hong Kong Baptist University School of Communication, said. “She is also doing child minding, nurturing with positive personalities. [She] is college educated and good-hearted. She is also very intelligent.”

Part of Mendoza’s duties include helping her employer’s daughter prepare for exams in math and English — which is where Mendoza’s college education plays a role in her daily responsibilities.

Mendoza is uncertain about her return home — with a steady salary, a good relationship with her employer and no promise of a well-paying job back home, she believes her life working six days a week is the best way for her to become financially stable.

And she’s not the only one.

On the fourteenth floor of the United Centre in Admiralty, the labor attache at the Philippine Consulate, Nenita Garcia, sits with a view of Victoria Harbour behind the piles of paper on her desk. She said many foreign domestic helpers are like Mendoza, with degrees in other fields, but find working overseas is the best option for their career path.

“When you go abroad, the salary is higher than one they get in the Philippines … The population is going up, and the local economy really has to catch up with the growing population,” Garcia said.

Currently, the minimum wage for foreign domestic helpers in Hong Kong is about $530 U.S. a month — about $6,360 U.S. a year — Garcia said. The percentage of Filipinos living in poverty is 26.5 percent, according to the CIA World Factbook.

With college-educated workers such as Mendoza leaving because of the promise of higher salaries, the Philippine labor market is also changing as it struggles with both unemployment and maintaining a strong labor market.

The unemployment rate of the Philippines is 7.4 percent,  according to the CIA World Factbook. It’s even higher for those aged 16 to 25 — 16.3 percent.

Garcia said the government of the Philippines is trying to pull labor back into the country through reintegration programs, which train returning workers in areas of need in an attempt to help them secure a local job.

“Some of these workers are professionals — teachers, nurses — so we really try to get them to come back home and to work in the Philippines,” she said.

During the training process, Filipino helpers learn how to clean, cook and how to take care of children and pets, Garcia said. They also learn how to adapt to cultural differences in Hong Kong, including food, child care and differing holidays, before their deployment. Helpers are taught how to prepare Hong Kong cuisine, which is based on rice recipes.

Still, Mendoza recalls, “I had a total culture shock during my training.”

Changes in child care include how babies are bathed, Mendoza said. Additionally, she said children in Hong Kong must always be involved in extracurricular activities, which is something that differs from raising children in the Philippines.

Contracts for foreign domestic helpers are two years, Garcia said, but some helpers do not make it through their contracts because of termination or other issues.

Holly Allan, director of Helpers for Domestic Helpers, an advocacy group for the scores of thousands of foreign domestic workers in Kong Kong, said that many issues can arise during a contract, such as underpayment, abuse and illegal work.

But because of the better pay, many cases are often not reported.

“Most endure until they are pushed to the limit,” Allan said. “The salary of a teacher in the Philippines is less than a worker in Hong Kong.”

Melissa Moralez has been in Hong Kong for six years. Like Mendoza, she has a college degree, and sends a part of her salary back to the Philippines to support her mother and father.

Others are not so certain. 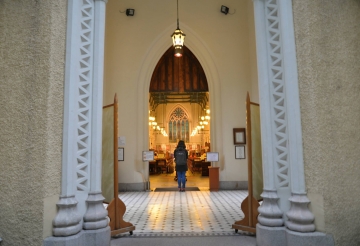 A woman stands at the entrance of St. John’s Cathedral, located on Garden Road in Central. St. John’s Cathedral is home to Helpers for Domestic Helpers, which provides assistance to domestic helpers living in Hong Kong by providing free services, guidance and support. Photo by Shannon Sweeney

April Delapena often spends her afternoon in the middle of Victoria Park, where her employer’s 17-month-old child plays in a sandbox.

With a smile on her face, and her eyes constantly checking on the child, Delapena thinks about her own journey to Hong Kong, and her doubts about returning home.

“My work there was good, but the pay is not high enough,” Delapena said. “It’s honestly better for me to stay here.”

Delapena came to Hong Kong about five years ago after attending college for chemical engineering. When she realized she couldn’t afford to finish school and earn her degree, she turned to being a foreign domestic helper.

Domestic Helpers Director Allan said while money is a large reason for people to stay in Hong Kong, it is not the only one.

“We know of many clients that have worked for their employer for many years and they would value the treatment of the employer more than the money,” she said. “Sometimes it’s out of desperation, and it’s just a job that they need.”

Mendoza said seeing her children walk across the stage to receive a college degree was a goal of hers when she decided to leave her home in Luzon.

And until she can save enough money to eventually return to the Philippines, she said she will continue waking up at 6:30 a.m. in her Laguna City bedroom to take care of a child that is not her own.

“I had to work on my own to provide for my children,” Mendoza said. “I have to think when my children get married, I want to be there. I want to take care of them.” 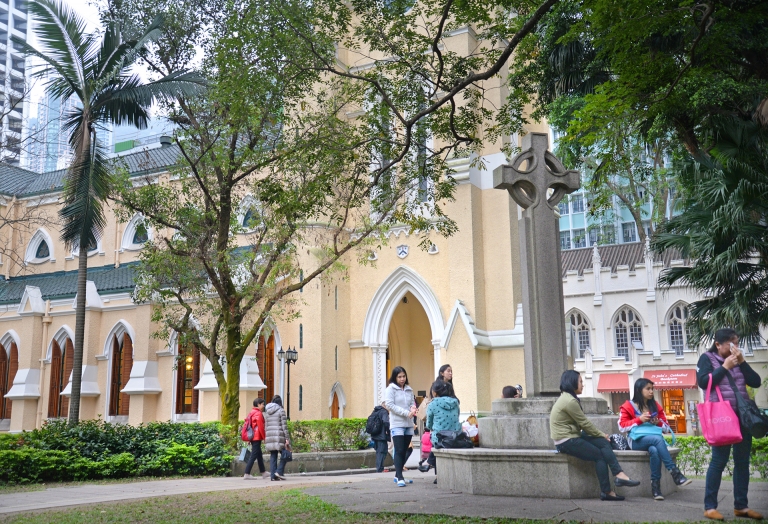 Churchgoers, including foreign domestic helpers, stand outside of St. John's Cathedral in the Central neighborhood of Hong Kong. Many domestic helpers from the Philippines spend their weekly day off worshiping and going to church. Photo by Shannon Sweeney
Tweet

Shannon Sweeney is the editor in chief of Penn State’s student newspaper, The Daily Collegian. She has interned at The Global Legal Post in London, UK and at her hometown paper, The Pittsburgh Post-Gazette. She is interested in copy editing and political reporting for a print or online publication after graduation.