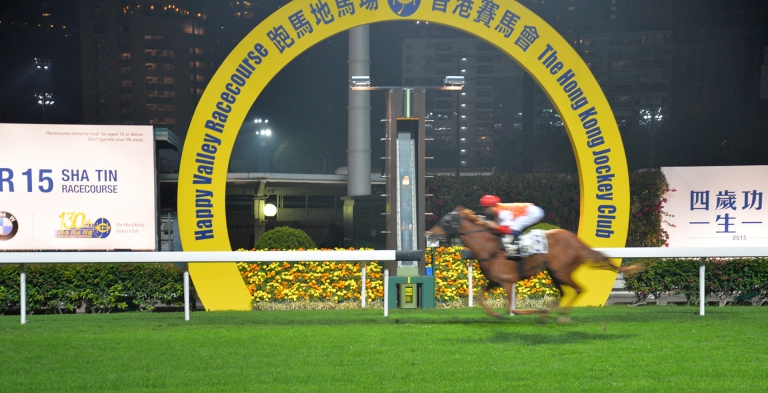 A horse and rider streak across the finish line on a Wednesday evening at Happy Valley Racecourse. The Jockey Club hosts the only legalized gambling in Hong Kong, with most revenue coming from horse races. Photo by Kristen Nelson


HONG KONG — A popular saying intended to reassure residents that everything will be all right despite Hong Kong’s uncertain future with China holds that all will be well in Hong Kong as long as “the horses are still racing and the nightclubs are still dancing.”

Andrew Fan, an accountant, doesn’t pretend to be able to explain nightclub dancing, but he has no trouble expounding on the enduring impact on Hong Kong of its storied Jockey Club.

Founded in 1884, 40 years after the British filled in a swamp to create land flat enough to stage horse races in their then-new colonial possession, the Hong Kong Jockey Club has become part of the fabric of Hong Kong – part playground for the rich, part working person’s gambling parlor, part tourist attraction for Hong Kong’s millions of visitors, and very much a contributor to the social safety net of the city’s 7.2 million souls.

From controlling all legal gambling in Hong Kong to donating to over 168 charitable causes in 2013-14, the Jockey Club tries to reach out to much more than avid horse racing fans.

“The Jockey Club wants to involve every single person who’s interested in horse racing to join us however best fits their lifestyle,” says Fan, whose is a voting member and horse owner and whose mother Dr. Rita Fan is one of 12 stewards, or the top directors of the club. 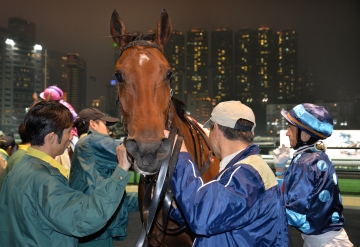 The Happy Wednesday evenings typically include nine races, with about a dozen horse competing in each race. The majority of the horses stay across town from Happy Valley at the Sha Tin Racecourse. Photo by Kristen Nelson

Essential to this atmosphere is the role the club and horse racing play in helping to preserve treasured links to Hong Kong’s past as a British colony.

Even though it has been 18 years since the official handover of Hong Kong from Britain to China, evidence of the United Kingdom’s rule is everywhere. There are British accents asking you to “please mind the gap” on the subway, restaurants serving familiar Western cuisine, and cars driving on the left side of the rode.

But whether under Chinese or British rule, Hong Kong has maintained an identity unique from China or Britain.

This distinctiveness is nowhere more on displayed than at the Happy Valley racecourse, which is a 13-acre, seven-story facility that can hold 55,000 people on race days Wednesday evenings.

Whether it’s Fan sitting in his mother’s steward box on a Wednesday race night at Happy Valley racecourse with a highball glass in hand, or British owners, jockeys, veterinarians and trainers grouped together in the parade ring before a race, the course is notably different from any other in the world.

It is not British, but it is not Chinese. The smoggy skyline of Hong Kong Island is in the backdrop and the track fits in like a football stadium does in Pittsburgh or a soccer pitch does in London.

Giving back to Hong Kong

The Jockey Club is more than just a museum piece where Hong Kong’s superrich can drink and make business deals in wood paneled boxes high above the racetracks.

In the 2013-14 financial year, the Jockey Club paid 8 percent of Hong Kong’s total taxes and set a record with $468 million of charitable donations.

Throughout its 130-year existence, the Jockey Club has consistently been progressive with the way it fits into Hong Kong’s society.

“It is the club's belief that whatever is made should go back to the society,” Fan said. “I don’t think it’s fair to say that without the Jockey Club, Hong Kong wouldn’t exist. But the Jockey Club definitely put a lot of effort and resources into helping out the community.”

Despite having British origins and being exclusive for Colonial Europeans, the Club opened up membership to Chinese members in 1926. Dr. Kim K W Mak, an Executive Director of the Jockey Club, says the inclusion of the Chinese people in the British club was a reflection on Hong Kong’s development into melding the two cultures. 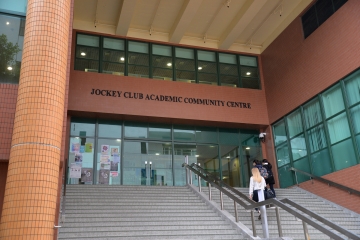 Hong Kong Baptist University has several buildings named after the Hong Kong Jockey Club. In the last financial year, the Jockey Club donated $468 million to charities, with education being one of its four main focuses. Photo by Kristen Nelson

Mak said the 130th anniversary also marks the 100th anniversary of the club’s charitable focus. After slowly growing into a profitable organization in its first 30 years, the Jockey Club has spent the last century donating to four main facets of charities in Hong Kong: education, arts and culture, medical and health, and elderly services.

For example, after WWII, tens of thousands of Chinese migrated from mainland China to Hong Kong and the colony found a need for tuberculosis treatment. The Jockey Club built hospitals and trained doctors in response as it ventured into the newly populated estates.

Then, when children were being taught on rooftops because the population outgrew the schools, the Jockey Club built more. When the city was looking for more recreational services, the Jockey Club created the Ocean Park, now a “pillar for Hong Kong’s tourism” as Mak said.

All throughout Hong Kong, buildings can be found with the Jockey Club’s name on them. Having consistently donated over $100 million per year since the 80s, the most rapid increase of charity came within the last 10 years. With the recent record-setting year in donations, the Jockey Club increased its charitable contributions by almost 85 percent from the previous year.

With successful people on the Board of Stewards and the elite filling the private booths on race night, the some people in Hong Kong are quick to say the city wouldn’t exist without the Club.

“We can’t be presumptions. There are different, romantic ways of describing it,” Mak said while writing down the results of the second race on a misty Wednesday race night. “We’ve never really run Hong Kong, but we just grew with Hong Kong.”

Andrew Waikens has been covering races by the Jockey Club for the South China Morning Post since Sept. 2013. Consequently, he’s been covering everything outside of racing that comes along with the Club.

Originally from Australia, Waikens has experienced horse racing one way or another in most of the popular racing countries around the world. He says there seems to be a difference in the Jockey Club from the rest of the horseracing world.

“You should see some of the press releases I get from the Club,” Waikens said. “It’s very sterile, some of the things they present about themselves. But, they really are different. They don’t get the scrutiny they usually would because they’re looking out for the rest of Hong Kong.”

A sport that draws spectators

That relevancy isn’t just within the way the Club plasters its name on seemingly every other building in the city. The sport of horse racing is still one of the most popular in Hong Kong.

Now celebrating its 130th anniversary, the Jockey Club has emerged a leader in the horseracing world, as racing in the United States has dwindled to depending primarily on the Triple Crown races for public attention.

“We continue to reinvent the sport, and focus all the time on integrity and the quality of races,” Mak said. “That seems to be what it takes to keep the sport popular.”

After the Club completely transitioned to professional races, there was need to combat the illegal betting market. Underground bookmakers have been a problem ever since the first race took place at Happy Valley in 1846. The money gambled through bookmakers is not regulated by the government, therefore isn’t taxed or put toward charities.

It was until over 100 years later that steps were made to heavily combat this issue.

To help alleviate problems with illegal bookmaking, the Jockey Club authorized Off-Course Betting Branches in 1973 per the Hong Kong government’s insistence and the first six were opened the following year.

To this day, the Jockey Club is the only way to legally gamble in Hong Kong. While neighboring Macau challenges Hong Kong with its opulent casinos, the Club had almost $3.9 billion U.S. in betting revenue, split between horse racing, soccer betting and a lottery. The Jockey Club does all of its transactions with cash only to avoid lending money through credit.

“Some people can easily mistake us as a monopoly in horse betting, but that’s not the case because there are still illegal bookmakers,” Mak said. “These days they tend to be on the web, they tend to be in Macau, China, everywhere. They can take illegal bets on the telephone, it’s very, very easy. “

Most of the depravity, aside from jockeys tipping off or fixing races, happens outside of the club, Waikens says, like when jockey Chris Munce was convicted of taking bribes for tipping off a local businessman about race results. Munce spent two years in jail.

“If there’s gambling, there must be some corruption,” Fan said laughing while sitting in the office of his accounting firm.

Making money within the Club as an owner isn’t as easy as some might imagine it to be.

Horse owners, like Fan, are obligated to bet on their own horse so as not to look bad, but most horse owners never profit from their investments. To own a horse, one does not have to be a tycoon, but one has to be prepared to spend $260,000-$390,000 U.S. to cover all of the costs.

Again, those who do are in it primarily for the status and the love of the sport, Fan said.

His first horse, which reached the top class at one point in his career, just barely broke even financially. For his horse current horse, One Of A Kind, which he owns with his mom, Fan doesn’t project to make any money from it at all. In fact, he is prepared to lose money.

“Yeah I’m ok with that,” Fan said genuinely. “[Being a horse owner], it’s a self-recognition problem more than anything else.”

As Hong Kong continues to preserve its identity, as seen with its work for independence and global influence, Mak said the Jockey Club has every intention of being a part of the city’s future.

The Jockey Club has made its name recognizable and respectable throughout both Hong Kong and within the world of horse racing. As the Club works to build more facilities in Guangzhou in Mainland China by the 2018 season to adapt to the growth of the sport, Mak realizes there is a lot of work to be done to maintain the Club’s identity as well.

“Integrity is not something you can be complacent about. We take that very, very seriously indeed,” Mak said before heading down to make appearances at the racecourse. “Our integrity is built over decades and it is quite important to us as an organization. We are optimistic that our impressive donation year is not an outlier.”

Kristen is from Canton, Ohio and is the football editor for The Daily Collegian. She will be interning for NHL.com in New York this summer.