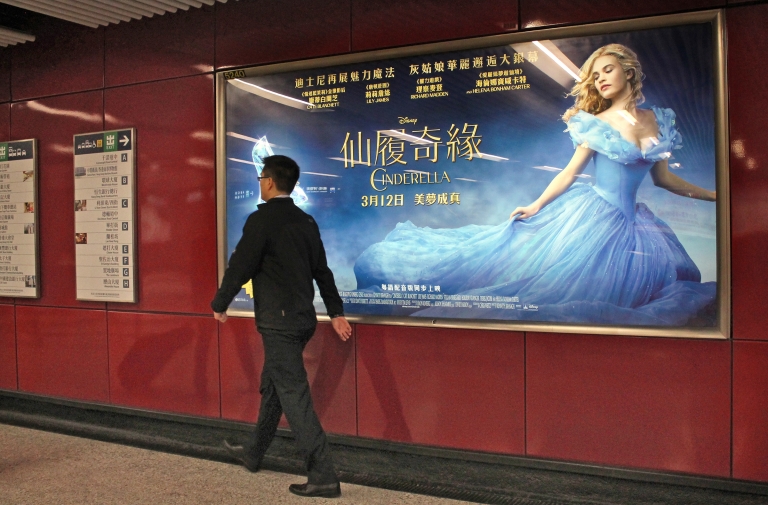 
HONG KONG — A spacious and wind-swept promenade alongside Hong Kong’s Victoria Harbor draws scores of thousands of movie fans year after year to celebrate the stars of a film industry that once made Hong Kong “the Hollywood of the East.”

Hong Kong’s Avenue of the Stars is in fact patterned after Hollywood’s Walk of Fame. Tourists from around the world kneel gleefully on the pavement to measure their hands against the concrete prints of their favorite stars, or line up patiently to have their pictures taken next to the life-sized statue of Bruce Lee in full karate stance.

But in movie theaters throughout Hong Kong, there is ample evidence that the city’s once-thriving film industry is fading. Instead of screening the latest Jackie Chan thriller or tightly plotted drama from director John Woo, Hong Kong theaters are entertaining packed houses with movies like “Avengers: Age of Ultron,” – among the latest Hollywood blockbusters to shine here since “Transformers: Age of Extinction” earned the country’s highest box office earnings a year ago.

Meanwhile, only a few of the ubiquitous posters for movies in Hong Kong’s subway system are touting locally-produced films.

“What film industry?” asks Gary Pollard, a former producer for Radio Television Hong Kong. “It is an almost non-existent shadow of what it used to be.”

And like so much else about Hong Kong’s future, the answer to whether Hong Kong’s moviemakers can ever regain their past glory lies a few miles inland in China. 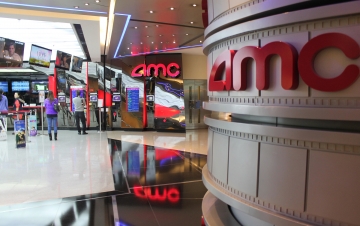 On a busy afternoon at the AMC Theater in Kowloon Tong, Hong Kong, a variety of films are being screened. These include Hollywood films, such as "The Imitation Game" and "Foxcatcher," as well as locally produced films like  "Sara," a psychological thriller. Photo by Evan Romano

At its peak, Hong Kong’s movie industry was third in the world in terms of total global value, trailing only the Bollywood madness of India’s film industry and the flashy American blockbusters of Hollywood.

Audiences both in Hong Kong and around the world marveled as Hong Kong  released upwards of 200 to 300 films per year, including the acrobatic martial arts of Bruce Lee and Jackie Chan.

“A few decades ago, Hong Kong films were dominating the market so much that distributors were actively talking about not bringing  any Hollywood films in,” Pollard said.

Today, though, Hong Kong has fallen out of the top 10 in the world in total global value of its industry behind even South Korea and Australia. Where the industry would put out anywhere from 200-300 films during its peak, the yearly output now ranges between 10 and 20.

In some aspects, it’s simply the fact that the bells and whistles of Hollywood are just too much to compete with.

To many, salvation lies  in the vast market adjacent to Hong Kong. China is now the second largest market for movies in the world but opinion is virtually unanimous that it will soon pass the United States and achieve the No. 1 rank.

Obvious cultural, linguistic and geographic proximities would seem to give Hong Kong’s filmmakers a ready-made market for the kind of action films they do best.

For example, Jet Li, now an international action star, was born in China. Li found his niche and built his brand through Hong Kong produced films while the market was near its peak, before eventually moving to make films in Hollywood. 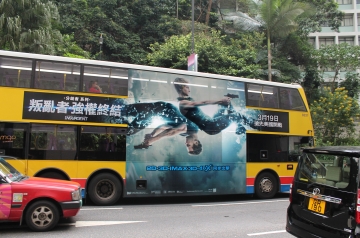 Advertisements for Hollywood films, like this bus being used as a canvas to promote "Insurgent,"are more common than those for local films in Hong Kong. Advertisements on and in  public transportation are common. Photo by Evan Romano

Intercontinental is a film conglomerate in Hong Kong, handling the distribution of many foreign films, including all of those produced by Paramount and Disney overseas.

Established in 1969, Intercontinental is constantly on the lookout and competing in both the Hong Kong and global markets for viewers and revenue alike.

Lee, who has been with Intercontinental dating back to that “golden age” of cinema, says that the market split between Foreign and Local film production is now about 70-30 in favor of the foreign films, whereas that ratio used to be reversed.

The market was once able to sell an international market on Cantonese-language, Hong Kong produced films, and that was when the industry was thriving. But now, audiences are hungry for special effects — resulting in 2014’s highest grossing film being Transformers 4, which Intercontinental distributed — leaving investors uneasy about putting a lot of money into local productions, nearly all of which are relatively low budget.

“No Hong Kong director can compete with that,” Lee said. 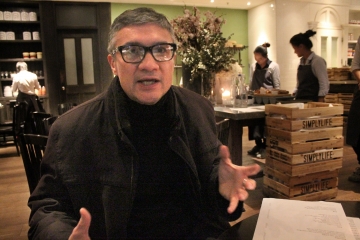 Director Antony Szeto,who had just returned from a trip to Los Angeles, describes his vision of  the future of the Hong Kong film industry during an interview in Kowloon Tong, Hong Kong. Szeto, who works in both Hong Kong and China, says that the two industries have a future that will eventually merge closer and closer together. Photo by Evan Romano

Antony Szeto, an ebullient 50-year –old Australian-born film director who has spent most of his career in Hong Kong, sees the merging of Hong Kong’s and China’s film industries as inevitable as the eventual political merger guaranteed by the 1997 handover of sovereignty of the former British colony.

“You’ve got a diminishing market in Hong Kong, and a big market growing in China,” he said. “Therefore, all the people that know how to a make a film, and want to make money are going to China. It’s this double whammy, happening at the same time.”

One of the most prominent moneymakers currently coming out of Hong Kong is the idea of a co-joint production between the two nations, where money is being contributed from both countries, and thus both nations can name it as a production. This particularly comes in handy in the mainland, where each film has to pass certification from a censorship board and only 36 films per year are allowed to be imported in.

One of the largest of those co-joint ventures in recent history is a 2015 release called “Dragon Blade.” It is a rare, non-Hollywood production that had a strong advertising campaign in Central Hong Kong, and had a budget of $60 million U.S. — not particularly high by Hollywood standards, but massive by Chinese and Hong Kong standards.

The film stars Jackie Chan, who remains a draw today in the Chinese market, despite falling out of favor with many in Hong Kong over the years. Interestingly, however, “Dragon Blade” costars two big names in American cinema: John Cusack and Adrien Brody.

Indeed, Szeto predicts that not only will the Hong Kong industry orient itself toward China, but Hollywood will as well.

That’s the goal right now, and that merging is happening in more ways than one.

“I think there’s a fad happening here at the moment,” Szeto said. “I think Chinese audiences like to see their people being mixed with American big stars. They watch all the big stars. They know Adrien Brody. They know John Cusack.”

In 2011, Christian Bale — an A-list star in America by all accords  — starred in a Mainland China production, titled “The Flowers of War,” that was scarcely seen or heard about in the United States. Matt Damon is set to star in the next film from director Yimou Zhang, who directed the aforementioned “Flowers.”

So China’s market is growing, and stars from all over want in. But where does this leave Hong Kong?

Szeto insists that “you can’t really pull Hong Kong out of China,” because of how closely connected the two have now become.

Some in Hong Kong see a different future, though, a future where independent, creative filmmakers can make more sophisticated movies for smaller but still significant audiences. 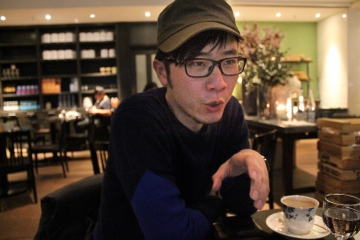 Eric Tsang, a 27-year-old independent director based in  Hong Kong, believes that a more sophisticated market can be the springboard for the directing talent of the future.

“Independent films have a disadvantage, but sometimes the most successful films come from independent directors,” he says, citing Hollywood examples such as Stanley Kubrick and Quentin Tarantino. “Filmgoers should know of the potential in the indie circle ... It’s where the future comes from.”

The nature of the Chinese film industry is evident, in that the studios and distribution companies are forced to appeal to the masses of the country’s 1.3 billion population. The movies have to be as mainstream, audience friendly as possible, and the blockbuster, mass-audience appeal of a “Transformers” film don’t match up with the artistic and creative ideals of an independent filmmaker.

But Hong Kong doesn’t have to meet these standards — even aside from the censorship standards.

“China is not a mature enough film industry,” Tsang says.  “but Hong Kong can handle that.”

That industry has more turnover than what Hollywood audiences may be used to, as well.

For an industry that carries itself on the Star System (“Stars are everything. Star power is the must,” Szeto says), there’s massive turnover in that regard at all times.

While Chow Yun-Fat returned to the Hong Kong screen in 2014 for his first locally produced film in nearly 20 years and maintained his “George Clooney”-like status, Jackie Chan is no longer well liked within the local community.

“A lot of [the stars] really suck. They suck.” Tsang said. “Jackie Chan has a very bad image. Maybe audiences in the U.S. will like him because they like kung fu, but Hong Kong people are really sick of these kinds of stars.”

Lee mentioned a similar type of celebrity turnover, saying that right now, some of the  biggest stars are Britons like Benedict Cumberbatch and Eddie Redmayne, who were relatively unknown only a few years ago.

“Audiences are not loyal to anybody,” Lee said. “If you have films coming out once a year or twice a year, they’ll still remember you, but if you don’t have a successful film in quite some time, sooner or later, they just forget you.”

The issues with the merging of the tightly controlled Chinese and the loose Hong Kong industries, of course, will be balancing the creative ideas from Hong Kong’s minds with the sometimes-strict censors of the Chinese government.

The government is known to get looser and looser with what is allowed through until something comes through that questions everything  —  Szeto mentioned the Ang Lee film “Lust, Caution,” which contained edgy factors such as nudity and  a main character who is more of an anti-hero. When a more edgy film makes it through to cinemas, the censors get nervous, and tighten their scope up for a while.

“Transformers is perfect. There’s no blood at all. I can smash Optimus Prime’s eye out of his head and all that … he’s a damn robot,” Szeto said. “Who the hell [cares] whatever about it? But if I did that with somebody and his eye popped out? No way would that be allowed in China.”

At the very least, until 2047, Hong Kong will maintain under China’s rule. And at this rate, it looks like the film industry will continue to trend that way as well.

Szeto says that he foresees the future as the two having a strong, working relationship, with Beijing working effectively as the industry’s “Hollywood,” but Hong Kong continuing to function as the “New York.”

“The money will be in Beijing,” the exuberant director predicted. “But the more interesting ideas, the more cutting edge things, will be coming from Hong Kong”

Evan is a print and digital journalist who worked at The Daily Collegian most recently as Features Editor. He grew up just outside of New York City in Upper Saddle River, New Jersey.

What’s Wrong with the Flyers?

NHL Game of the Week: Panthers vs Lightning

Around the Big Ten Hockey: Dec. 8