The streets are filling up with tourists clad in blue and white. The Irish are starting to take notice of the American college football presence, with bystanders at the airport wanting pictures with a coach they have never seen before and a taxi driver noting the “60,000 Americans going to Croke Park on Saturday.”

That might be an overstatement. But popular downtown pubs are beckoning Penn State and Central Florida fans with window paint, events for the game and special offers. 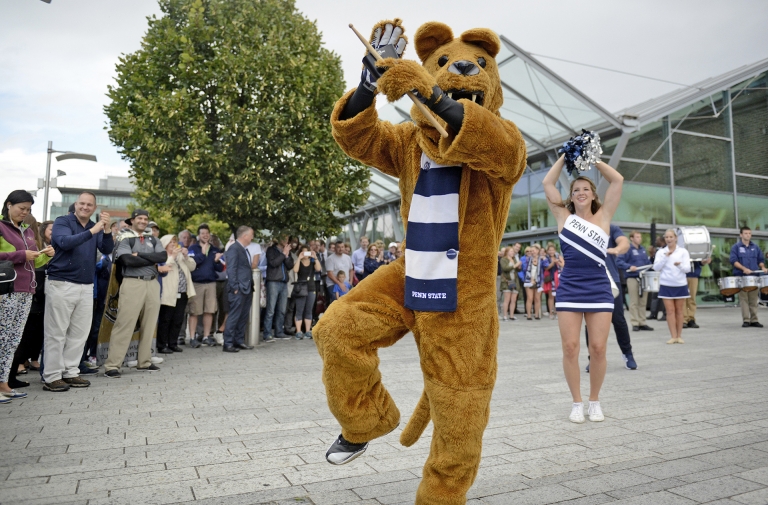 The Blue Band and cheerleaders performed Thursday afternoon at two of Dublin’s more notable venues. The first half-hour show was at the CHQ Building, which overlooks two Dublin gems – the River Liffey and George’s Dock. The second was on Grafton Street, one of the country’s most notable shopping locations.

A Penn State showcase off the field

Penn State football isn’t the university’s only presence in Dublin.

Penn State’s academic side is on display Thursday at a U.N. conference about sport and recreation’s role in developing and empowering the communities of Ireland—and how what’s happened in Ireland, once a poor country, is relevant to shaping similar communities around the world.

The Symposium on Youth Engagement and Leadership through Sports and Recreation was organized by Penn State professor Mark Brennan, who holds a chair endowed by the United Nations Educational, Scientific and Cultural Organization. Four other Penn Staters – a professor, a current student and two alumni – are also participating on panels.

The conference will conclude with the drafting of a policy proposal, to be submitted to the United Nations, calling for youth empowerment and community development through sport around the world.

Weather: Sun … but wind and clouds, too

A high of 63 here is prime practice weather for the Lions and Knights. Let’s not forget the wind and occasional cloudy skies, though.

“I was thinking if I had to drive, I would have probably been in five accidents already.”

on the opposite side of the road in Ireland.


(Melissa Conrad is a student in the John Curley Center for Sports Journalism. Fellow student Bobby Chen contributed to this report. )