PHILADELPHIA – Hillary Clinton did not choose a Latino as her vice presidential running mate, but members of the Latino community in Philadelphia said on Monday that they were more interested in having a vice president who is a “good person” than choosing someone merely because of his race. 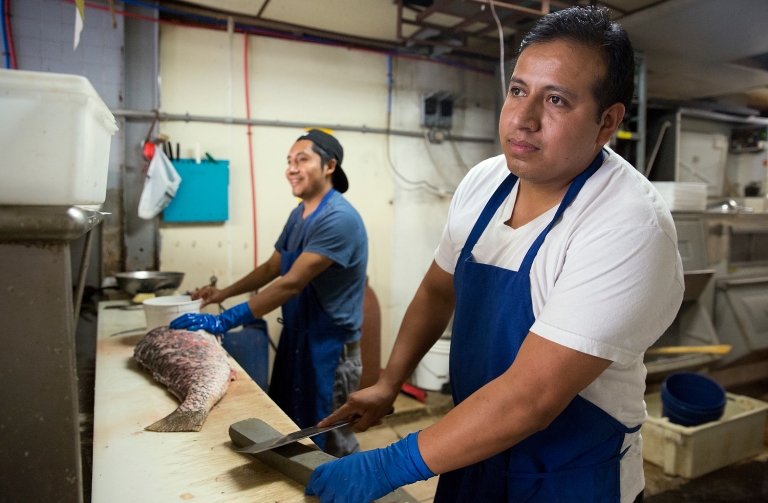 Apolonio Rodriguez, left, and Fabian Corona, both from the state of Tlaxcala in Mexico, look up as a customer walks into the seafood shop in South Philly on Monday, July 25, 2016. (Photo by Antonella Crescimbeni)

“Sometimes it’s not about them being Hispanics or Americans, what matters is their way of thinking. What matters is the way they want to help,” said Fabian Corona, a 34-year-old South Philadelphia resident and fish market worker born in Mexico City.

Clinton chose U.S. Sen. Tim Kaine of Virginia -- who speaks Spanish and served as a missionary in Honduras for nine months.

Corona said part of what makes Kaine a “good person” is that he speaks the language – a stance shared by Daniel Fernandez, 32, a Philadelphia resident who is also from Mexico City. For him, Kaine is a good choice because he will be able to communicate effectively with the community.

“We can understand each other more clearly. We can express ourselves … better as Hispanics in our native tongue, and receive more choices, so people feel safe,” he said. Fernandez has spent 10 years in Philadelphia.

But with the Democratic National Convention unfolding, some Hispanics, during interviews around South Philadelphia, said they are less than enthusiastic about both Clinton and Republican rival Donald Trump.

Denis Valerio, who works at a convenience store and is a native of the Dominican Republic, said Trump dislikes Hispanics, but the alternative, Clinton, is not much better. 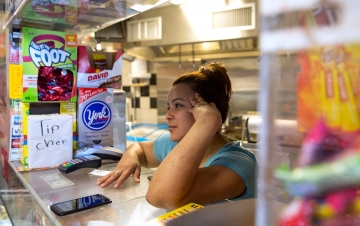 “She promises things that are unreasonable. For example, she never sought to implement any changes to undocumented immigrants while her husband was in office, but now that she wants the presidency, she is talking about it,” said Valerio.

Elois Santiago, 49, from Mexico City, has lived in Atlanta, Georgia, for more than 30 years and shared Valerio’s sentiments.

Denis Valerio, from the Dominican Republic in the province of Santiago Rodriguez, spoke about her thoughts on the upcoming campaign from the shop she works at in Philadelphia. (Photo by Antonella Crescimbeni)

“I think Trump and Clinton are both bad for the country because they don’t try to do anything for the community. They only try to help themselves,” said Santiago.

Santiago is a leader of the Georgia Latino Alliance for Human Rights, and he led a march on Monday down 5th Street in South Philadelphia. The Latino Alliance of Georgia was joined by Revolution Club, another Hispanic advocacy group, and Hispanics from Virginia, Pennsylvania, the Carolinas, Arizona and Illinois.

With police looking on, about 100 people marched peacefully. The Latino Alliance also included individuals from Berks County, carrying banners, who want to close a detention center in the eastern Pennsylvania community and want a moratorium on the mass-deportation of illegal immigrants. 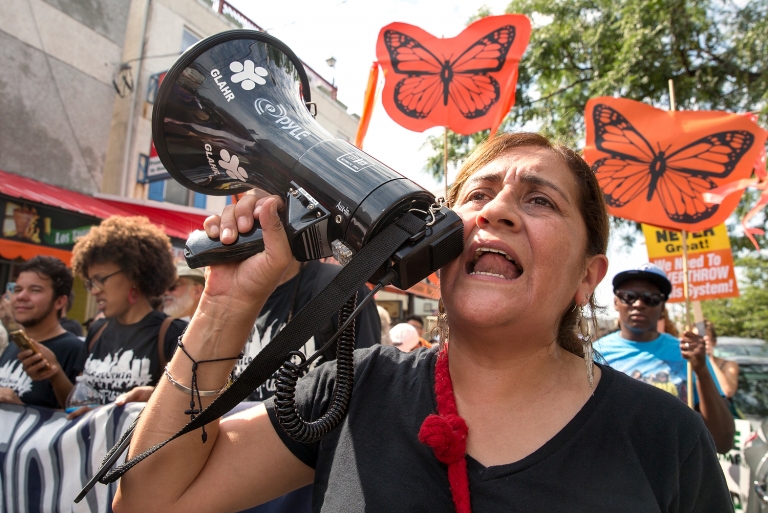 Adelina Nicholls, from Georgia, screams into a megaphone to a crowd in South Philly on Monday, July 25, 2016. Nicholls is part of the Georgia Latino Alliance For Human Rights organization and was marching with the group to City Hall during the Democratic National Convention. (Photo by Antonella Crescimbeni)

“Hillary Clinton, when she was here in Pennsylvania, said she supported the closing of this detention center, so we are here for her to reaffirm her support,“ said Adan Jesus Marin, an immigrant from Puebla, Mexico, who lives in Reading.

Some Hispanics said Monday they were strong supporters of Clinton. Raquel Mejia Rubio, 43, is from Mexico City and has lived in Philadelphia for eight years. She said she believes Clinton will do, at the very least, more than Trump.

“She will help by at least not kicking us out of the country,” said Rubio.

In numerous interviews, one thing Hispanics seemed to agree on was their unfavorable feelings about Trump.

“I’m scared because if Donald Trump wins, we will be sent back to Mexico,” said Rubio.

Clinton is also seen as a good candidate by Vincent Velez Jr., 48, from Puerto Rico, who said both former president Bill Clinton and Hillary Clinton will be significantly better because of their combined experience serving the country. 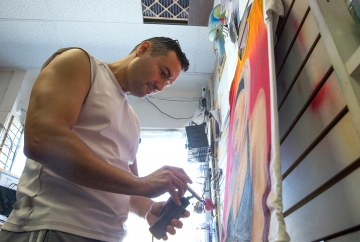 “With Hillary, you’re basically getting two for the price of one,” said Velez, a Philadelphia native with family in Caguas, Puerto Rico. “The experience goes way above what Trump has to offer.”

Vincent Velez Jr., from Philadelphia, airbrushes Gwen Stefani onto a shirt. Velez is the co-owner of the "Airbrush Allstars" shop in South Philly.  (Photo by Antonella Crescimbeni)
Tweet