STATE COLLEGE, Pennsylvania — A baseball field in Havana will become the stage for the next step in the warming relations between Cuba and the United States, and this time, the Americans will be wearing the blue and white of Penn State. 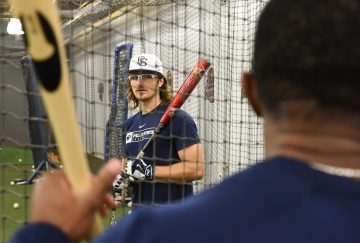 The Nittany Lion baseball team starts a rare four-game tour in Cuba on Sunday, with its first contest coming against the famed Industriales, a team many proclaim to be the Yankees of Cuba. The game will be at the Estadio Latinoamerica, and – like the other stops on the journey – will pit Penn State against some of most impressive baseball talent Cuba has to offer.

Coach Rob Cooper, his staff and his team, who will be replacing their Thanksgiving of turkey and mashed potatoes with a trip to Havana, understand they’ll face some daunting competition. But it’s less about the wins and more about the cultural experience.

“I’m excited about the baseball part, and that is the vehicle that is definitely taking us down there, but it’s honestly the last thing that is the most important in this trip,” Cooper said.

The blue and white’s arrival in Havana holds some significance for the Cuban people, too, as Penn State’s first two games will be televised across the country on the nation’s premier sports network, Telerebelde.

Other U.S. baseball teams at the college and professional level have played in Cuba since the Communist regime took power on the Caribbean island more than 50 years ago, but Penn State is the first to compete in Cuba since the restoration of diplomatic ties earlier this year.

“It’s a tremendous educational opportunity at a critical time,” Professor Emeritus of Communications and International Affairs John Nichols said. Nichols has been visiting Cuba since 1971 and will be traveling with the team.

Cooper always hoped to take his players on an international trip, an opportunity the NCAA allows every four years.

Last winter, Cooper met with a group of fundraisers to brainstorm improvements and future projects for the baseball team. When conversations about an international journey arose, director of the Varsity ‘S’ Club Kirk Diehl suggested Cuba.

“At first, I thought he was kidding,” Cooper said.

Diehl was far from kidding. He utilized his relationship with Nichols to kick-start the trip.

Cooper and his team have worked closely with Nichols and a Penn State administrator for global programs, Kate Manni, to plan the trip and learn about Cuban culture, a concept that has resonated with many players.

“I’m excited to play, but even more excited to learn about their culture,” senior outfielder James Coates said. “I know seeing how passionate they are about baseball will help both me and our team.”

The NCAA allows Penn State 10 additional practices in preparation for the trip, however many of the players said they aren’t doing anything different to prepare. In addition to beginning practices last week, the Nittany Lions have been playing with wooden bats, as opposed to college standard aluminum.  They will use wooden bats during their games in Cuba, but normally follow this regimen during their fall season.

Baltimore Orioles international scout and former major league pitcher Calvin Maduro said the Cuban players are some of the most polished to play the game. Baseball itself has a history in Cuba that dates back to the 19th century, and has long been the top sport in that nation.

“The thing about Cuba, is there is so much talent for such a small island,” Maduro said.

Junior catcher Alex Malinsky said he’s heard the Cuban competition is strong, but plans to play just as he always does.

“I could go down there and be okay with not getting a hit,” Malinsky said, “I want to compete, but I really want to have an exchange with a player. It serves as a symbol between us and Cuba.”

In addition to the trip’s cultural importance, many Penn State players are looking forward to spending the holiday with their teammates.

“The team is excited for the chance to go as a family,” senior infielder Tyler Kendall said. “The team bonding will just help spring board us into our regular season.”

The journey to Cuba won’t be a short one, as the baseball team departs for Newark early Saturday morning. From there, they’ll catch a flight to Miami and then another one to Havana.

The players will quickly take the field on Sunday and will fill out a busy week with academic lectures and cultural activities planned by the Center for Marti Studies, the team’s host.

Penn State returns to the diamond Nov. 25 against Ciego de Ávila, the defending champs of Cuba’s top league, the National Series. The Nittany Lions will then travel to Pinar Del Rio on Nov. 27 to play Mayabeque, and will finish out the trip the next day against the Matanzas in Victoria de Girón Stadium.

“This is a unique time,” Cooper said. “These are great kids that I know will represent our country and Penn State in a great manner.”

(Maddie Brightman is a student in the John Curley Center for Sports Journalism at Penn State.)