PHILADELPHIA – In a sea of “I’m with Her” and “Feel the Bern” signs, artist Len Garon is showcasing a different kind of poster — the official poster of the 2016 Democratic National Convention.

“History in the Making” was designed to remind the nation of two related events – a time when women were fighting for their right to vote – and this week, when a woman is fighting for the Democratic presidential nomination, Garon said. 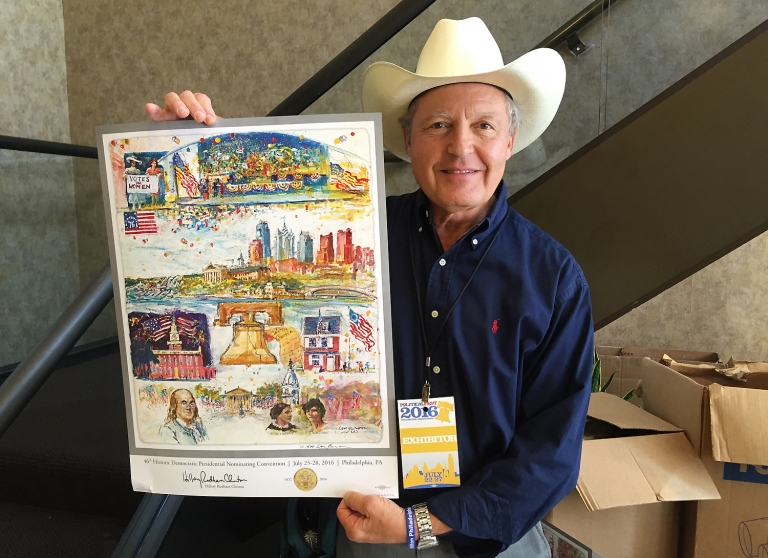 Len Garon with his poster. (Photo by Samantha Lauriello)

The poster shows a woman from the Progressive era and a present-day woman both holding a sign that reads: “Votes for Women.” The former is fighting for women’s suffrage and the latter is calling for votes for a woman president.

“The Liberty Bell is in the center of the painting because that’s what it’s all about,” he said.
Moving beyond the bell, Susan B. Anthony and Alice Paul also make appearances in the poster, emphasizing their hand in getting women to where they are today, he said.

Near the bottom of the poster, Garon featured the Benjamin Franklin Parkway leading up to the Philadelphia Art Museum, where he replaced flags of other countries with the American flag.
In his work, Garon, who lives in Alexandria, Virginia, often partners with Cindy Wallace, an artist from Pittsburgh, Pennsylvania, who also now lives in Alexandria.

“Nobody likes getting older in life, but fortunately and unfortunately I’m old enough to remember different days for women,” Wallace said regarding the impact of the poster.
The theme of women’s rights surrounding the 2016 election is what drew Garon to design the poster, he said.

“I’m all about advocating for equality,” he said.

After much success in designing the official poster for the 2013 inauguration of President Barack Obama and Vice President Joe Biden, Garon was asked to design the poster for this year’s DNC.
The poster transitions from the two women holding hands to a vibrant image of the 2016 DNC — a lively hall erupting in celebration of the nation, Garon said.

“I think this is the greatest country,” he remarked. “We have that choice here in the United States and that freedom to run for political office or to be whoever you want to be.”

Garon, who holds a master’s in public administration from the University of Colorado, said he chose an unconventional path following college and is grateful that he lives in a nation that allowed him to do so, he said.

Garon said this election is important for the nation.

“We need somebody who's really interested in helping our country… We need that to be strong after having been weakened,”  he said.

“History in the Making” posters are being sold at the Pennsylvania Convention Center as well as at various state delegation events.