In Cuba, baseball is more then just a sport, it is a passion and a way of life


HAVANA – What does baseball mean here? 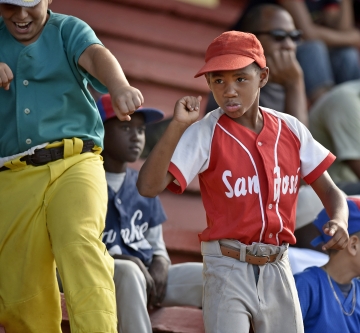 It’s a question that can prompt revelatory answers in this country, where the sport is so big there are nearly 48,000 organized teams at all levels, from those for 8-year-old boys and teenage girls to the National Series, Cuba’s top club league.

While the actual season lasts from fall to spring, the chatter about baseball never stops and it does not take much to get people to discuss the meaning of the game.

Before the first pitch is thrown, the last thing Evyan Guerra says is, “Comienza la pasion!” The passion is starting.

Life in the broadcast booth in Cuba is similar to the United States, where the on-air talent stay impartial no matter who they cheer for off duty.

Despite being a fan of the Cuban national team, Guerra says he puts his emotions aside when it’s time to work.

“Since I couldn’t be an athlete, I wrote in college about games,” the famous broadcaster for the Cuban sports network Telerebelde says through a translator. “And it has been 10 years now.”

Guerra provides Cubans with entertainment, and says baseball gives them the best of times.

“There would be something missing without baseball,” Guerra says, shrugging. “You can find any surprise in a baseball game. You can see tears and smiles, and you can be happy and suffer.” 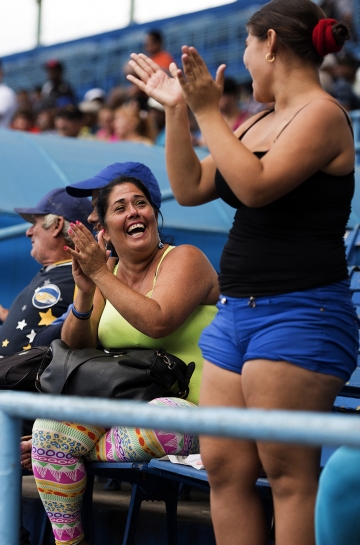 For a fan of the team known as the Yankees of Cuba, watching baseball can be emotional.

Yamilda Perez admits that she has cried, laughed, and yelled at games.

“Baseball for me and my family is the air that we breathe,” she says, looking toward the field at  Estadio Latinoamericano. “When there is no baseball, we feel very bad, as if we are sick.”

When not working in her store, Yamilda and her family follow Havana’s Industriales.

“I go to the training and everywhere. I have built a relationship with them,” the 43-year-old mother of two says, sitting next to her children.

Yamilda and her family have become friends with the team and take the time to snap photos when they see the players.

When not following the Industriales, Yamilda watches her 7-year-old son, Josue, play in a competitive travel team.

To Josue baseball is “very good” and he enjoys playing pitcher and catcher. Yamilda agrees with her son, and adds that, without baseball, there is nothing.

Being a female umpire is not easy, especially in a game most often played by men. But Janet Moreno Mendinueta says baseball is her life. 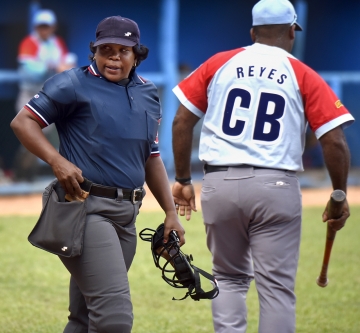 “My father used to live behind right field of the Latinoamericano,” Moreno says, pointing over her left shoulder.

Her father used to bring her to baseball games as a child and feed her a bottle while in the stands.

“I would fall asleep and the roar of the crowd wouldn’t wake me up,” explains the ump. “I would sleep soundly until the next day.”

Moreno played competitively until she became too old to compete in the Cuban system for women’s baseball. Being an umpire was the only way to stay involved in the game she loves.

“Baseball is my childhood.”

To Penn State catcher Alex Malinsky, baseball was his youth and Penn State was his dream.

From then on, he spent long hours playing catch in his North Carolina backyard with his dad.

“I bleed blue and white. I grew up a Penn State fan because my parents are alumni and a lot of my extended family attended the university,” says Malinksy, who is trying to convince his younger sister to play softball for the Nittany Lions.

He is working on his own game, too. Malinksy says his biggest struggle is keeping things simple.

“Everything becomes a reaction, and if I think too much I screw up,” says the junior accounting major. “Whenever I play the game like I was a little kid, I end up doing the best I can.”

Despite being Cuban and a Havana native, Joel Elejade is a diehard Miami Marlins fan. 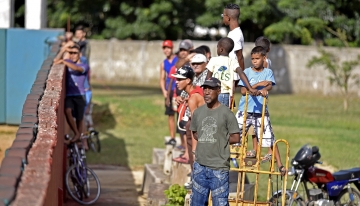 Elejade lives for baseball and incorporates it in his everyday life.

“I do all my duties at home, for example, always listening to baseball on the radio,” the 39-year-old candy merchant said.

While wearing a Boston Red Sox jersey and cheering for the Industriales as they defeated Penn State, Elejade made it clear the Marlins are his favorite team.

“Since 1993 I have listened, and (one day) I discovered baseball games,” Elejaide says. “The first game I ever listened to on the radios was the Miami Marlins.” 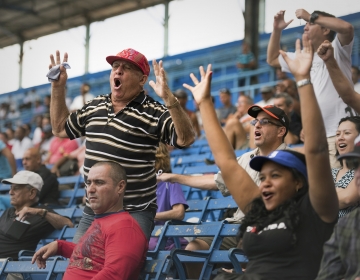 From the first moment he heard the game, he became a Marlins fan, which at that time were the Florida Marlins.

Baseball is all, he says.

Baseball gets him up in the morning and keeps him going on the job.

After having a few rough seasons, the Marlins fan stays true, but says the team and manager could use a little work.

“They have to learn to love baseball,” Elijad says. “If they keep thinking just business, the Miami Marlins are lost.”

Video: In their voices

The Cuban fans interviewed for this story express their passion for baseball during interviews with reporter Madeline Shutt.