RIO DE JANEIRO (AP) — Nearly 15 years to the day he lost his legs in an auto racing crash in Germany, Italian athlete Alex Zanardi captured a gold medal Wednesday at the Rio Paralympics. 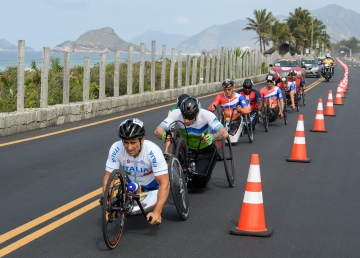 Competing in the men's road hand-cycling time trial, Zanardi won in a time of 28 minutes, 36.81 seconds, ahead of Stuart Tripp of Australia and Oscar Sanchez of the United States.

On Sept. 15, 2001, Zanardi was nearing the end of the American Memorial 500, a CART race, when his car was struck hard by another as he tried to merge back onto the track from pit row. Both of his legs were amputated above the knee.

"At the time, I was asked if I would ever step back in a race car, but what was very important for me was to go into the bathroom and pee on my own, but I could not do that. I had to be helped. That was my No. 1 priority," Zanardi told reporters after his race Wednesday. "Day by day I managed to regain control and strength, regain some confidence and concentrate on different things and here I am now."

Eventually, Zanardi did return to sports, taking up hand cycling. He won two golds and a silver at the 2012 Paralympics in London.

Racing at the Olympic Stadium in Rio held a special meaning for the 49-year-old Zanardi. Rio is where he secured his first pole position in 1996.

"When it was announced that the Olympic Stadium was going to be built there I thought, 'Wow, I've always loved that place and been super fast there,'" Zanardi said. "But for some reason or another I never managed to win a race, so maybe it is time to go back to Rio and win something and put that right."