State College, PA - Claudia Hatch's classmates know how to find her on a Friday night. They just search to see where "My Hero Zero" is playing. "The coolest thing about playing in this band while I am still in college is that I get to be on stage every week performing for my friends and peers, doing what I love. It's so special."

Claudia Hatch is the lead female vocalist for the local State College band My Hero Zero. Hatch also happens to be a student at Penn State studying Public Relations.  The band is made up of five members, Hatch being the bands’ newest member and only student.

Hatch joined the band at the end of Spring semester 2019 and began touring with them throughout the summer all along the east coast.  Hatch is the only female and the only student in the band, and also is the youngest member.  My Hero Zero plays a cross between acoustic pop and indie punk rock music. 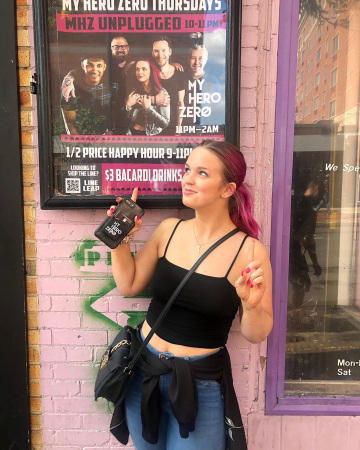 Although most of the shows in the past have been the band playing covers of popular hit songs, they are transitioning into playing more shows featuring their original music. Hatch is not the first student to be the lead female vocalist of the long-time State College band.

Hatch says she came to Penn State like most students in hopes of new adventures and new beginnings. She says she never imagined she would end up as the lead singer of a rock band. Hatch started performing in State College with a blues band at the bar Local Whiskey how My Hero Zero found her.

Although Hatch graduates this spring, she is planning to stick around and be a part of the band as long as she can. Hatch’s second passion is her major and she hopes to get involved in the business side of music, which is why she chose Public Relations. Hatch's sophomore year of college she interned with Sony Music and said she really liked that experience but still had her heart set on becoming a performer.  My Hero Zero is the first ‘rock’ band Hatch has ever been in, and the first band she has toured with. Hatch says that if she could achieve her biggest goals and dreams it would be to sell out Madison Square Garden. She says her goal is not fame and fortune, but to be able to share her passion and art with people all over the world.

Hatch can be found playing shows with My Hero Zero at the bar Phyrst most Thursday nights, and Champs Downtown most Friday nights.  Hatch says the coolest part about being the only girl in the band is the ability she has to play lots of songs they would not be able to play had they not have her in the band. Hatch says she enjoys singing covers of famous artists like Lizzo, Amy Winehouse, and P!nk. The band will be playing an original-only set at Bowery Electric in New York City this coming January.  She said the band is working on expanding their audience and playing more shows of their original songs.

My Hero Zero lead singer Claudia Hatch says good timing and a little luck led her to My Hero Zero.

I am a Senior intending on graduating in May of 2020. During my time at Penn State I have interned as a video production intern at Penn State Football, a VIP intern at Live Nation in Los Angeles, California, and a Digital Marketing intern at FloSports in Austin, Texas.