With 2020 coming to a close, the CommRadio Arts & Entertainment Staff chose its top five films of the year.

“The Invisible Man” was written and directed by horror icon Leigh Whannel. This is the second film directed by him however he has written many iconic horror movies such as “Saw”, “Insidious”, and “Dead Silence”.

This movie is a very unique remake. Most horror remakes feel dull and not very original. However, Whannel takes and entirely different approach to the iconic movie monster.

Elizabeth Moss is absolutely incredible as the protagonist. She is a really smart and strong protagonist which is uncommon in most horror movies. She steals the show and truly shines as the lead.

Although this is a horror movie, the suspense in this film is where it shines. Whannel is an incredible director and his shots make the audience paranoid, similar to the protagonist. We never know where The Invisible Man is, which leads to many intense action sequences and terrifying jump scares.

This is without a doubt the best horror movie of the year, and this film truly changed the game on how horror movies should be remade. It always feels fresh and never once feels dull or unoriginal. This is an incredible movie that everyone should go check out.- Jack Freiser 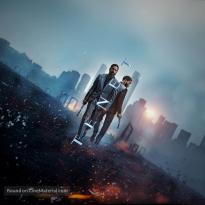 There was no movie this year that matched explosive big budget action with an entertaining plot quite like “Tenet” did. Master filmmaker Christopher Nolan has delivered once again with “Tenet” showing that he is the king of the big budget action spectacle.

Some other standout performances are Robert Pattinson as Neal, Elizabeth Debicki as Katherine Barton and the always excellent Michael Caine as Sir Michael Crosby.

The thing that really makes ‘Tenet” so fantastic are the action sequences, seeing an intense fight or car chase entirely backwards is an awesome thrill. Not to mention the sheer spectacle of a plane crash and explosion seen all in reverse.

“Tenet” may have an immensely complicated plot and can be a little long at times but the payoff of the excellent performances and explosive action are more than worth it. Choosing to use something as complicated as time and creating a whole action movie around it was a risky move.

Yet Christopher Nolan was able to pull it off and the results speak for themselves. If you want to see an explosive action thriller and one of the best movies of the year look no further than “Tenet” – David Fortunato

“The Trial of the Chicago 7” is a historical legal drama regarding the real events surrounding the Chicago Seven and the conspiracy that they were crossing state lines to incite riots at the 1968 Democratic National Convention.

Originally, the script for the film was written back in 2007 and Steven Spielberg was set to direct it. However, ironically enough it was the Writers Guild of America strike in 2007 that ground this project to a halt
.
The movie resurfaced in in 2018 with the announcement that Aaron Sorkin would take the helm as director and the cast of the film followed suit the same month. It released in select theaters in September, but ultimately transferred to Netflix due to the Covid-19 pandemic.

The film became the second-most streamed movie during its debut weekend, which is considered “higher than usual for a more-serious entry Netflix title” by IndieWire.

Critics gave high praise to the film, specifically Richard Roeper of the Chicago Sun-Times, who went on to discuss that while the film is in fact a dramatization of events, it still holds essential truths. The movie is also commonly praised for tackling multiple things and describing the insanity of a war time courtroom.

This film has become one of the best cinema experiences of this year. With its fluid, but still dramatized, series of events while still providing aspects of truth about the prosecution of the Chicago Seven. – Colton Pleslusky

Disney’s and Pixar’s “Onward” makes the top five list with ease. This film stands out  from any other animated film yet and it raises the bar for many more.

This movie is about two elf brothers, Ian and Barley who go on a great adventure to use an old form of magic to speak to their long deceased father for a single day.

The plot is surprisingly very entertaining and moving. The brother’s relationship is exposed at the end to show the audience how powerful a family can be in a single-mother home.

Next, the animation is show stopping. The movie’s picture is crystal clear and sharp.

“Onward” doesn’t even compare to other Disney and Pixar animated movies. It is such a perfect picture, and it deserves a ton of recognition for that.

With that, they had well-known names voice the characters. Names like Tom Holland, Chris Pratt, Octavia Spencer, and Julia Louis-Dreyfus are the main characters in this film.

Every word said is with intent and purpose. These actors know what they are doing, and Disney knew what they were doing when they casted this people.

This film deserves a lot of recognition due to the amazing picture, story, and acting. Disney’s “Onward” sets the new precedent for animation films. .- Cade Miller

“Da 5 Bloods,” the most recent Spike Lee joint, was recently voted as one of the top 5 movies of 2020 by the Comm Radio arts department. Throughout the film, Lee’s main goal was to show his audience how there are repercussions for the mistakes that America has made in the past and sometimes those repercussions are on the American people and not America.

“Da 5 Bloods” is a story about four African American Vietnam veterans who travel back to the country where they fought to find a stash of gold that they found back in the war. The leader and 5th member of their group, Stormin’ Norman, played by the late and great Chadwick Boseman, told the group that the gold belonged to the African American people back home before being KIA.

The 4 veterans return to Vietnam in present day on a mission to find the gold and fend off Vietnamese attackers along the way.

Lee’s 2020 Netflix film is a story with themes of brotherhood, history, and the psychological trauma of PTSD. Lee teaches us the importance of remembering where you came from and remembering the people that got you where you are today.

With excellent dialogue, strong acting performances, revolutionary cinematography, and Spike Lee’s original style, “Da 5 Bloods” is one of the best made films of this year. This film connects the issues of race from the past to the current, making it a timeless landmark in the movie making industry.

The entire world misses you Chadwick Boseman and watching movies without you will never be the same. Rest in Power, king. —Sam Roberts