UNIVERSITY PARK, Pa. –  Michael Alfaia (senior-criminology) started dancing when he was 12 years old. At first his family suggested to him that it was better if he would search for another hobby. That didn’t stop Alfaia from working to master his dancing abilities. Alfaia feels that dance for him is not just a way of expression but also something that saved him from negativity in his life. 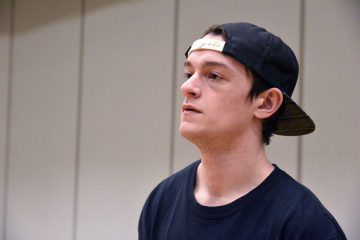 “Dance gave me confidence in my own ability, it was a skill that I learned myself, and I didn’t have to worry about somebody telling me that I was doing it wrong,”Alfaia said.

In elementary and in middle school Alfaia’s classmates didn’t accept him for who he was, he would be called names like weird, queer, gay and so on. Alfaia was searching for a way to express himself, he focused on his dancing skills. Alfaia first lived in West Chester, Philadelphia, he spent most of his adult life living in the Chicago suburb Naperville, Illinois.

After he moved to State College Afaia said, “I found a community that accepted me for who I am." Referring to his Penn State dance home Raw Aesthetic Movements Squad (RAM). Alfaia joined RAM Squad in his freshman year. He says that the people at RAM are like a family to him and that he wouldn’t have survived college if it wasn’t for them. On the spring 2019 semester, Alfaia had the RAM Squad social chair position where he would make sure that every new member would feel part of the team. “It’s more than just the dance there’s the people, the music, the art, it all coincides,” Alfaia said.

Alfaia has performed with RAM Squad at dance battles in Philadelphia, at the THON stage, at Penn State’s Best Dance Crew, at opening events for freshman classes and at events at the HUB-Robenson Center. "If there is a Penn State event, I probably performed at it," Alfaia said.

If Alfaia would have to describe himself in three words, these would be; positive, straight-forward and creative. Alfaia knows the fundamentals of many dance styles, but the ones that he has mastered are: hip-hop, krump and popping, house, waacking, and vogue. For Alfaia knowing how to dance these styles is not enough, for him the culture and the history behind the dances are also important things to learn.

What Alfaia dislikes the most of being a dancer is how some people doesn’t respect boundaries with him. When Alfaia goes out with his friends to clubs or bars people usually expect him to dance all night. Random individuals start battling him without realizing that all Alfaia wants to do is to have a good time with his friends.

Even on days when there aren’t any RAM Squad practices Alfaia stills tries to meet with RAM members to hang-out or to dance. Alfaia is currently working on putting together a dance workshop and he is also working on personal choreographies.


On a regular practice day the RAM Squad dancers help each other with moves, steps or choreographies.

"I have always been into dancing,"said Tyler Vu (junior-premed). This is his first semester at Penn State. Vu says he decided to take advantage of his interest in dancing joining RAM Squad.

“I’ve always wanted to learn how to dance,” said Sihan Liu (sophomore- energy business and finance). Liu discovered RAM Squad her first semester at Penn State, but didn’t joined right away because she had a heavy class load. “This semester I felt that I needed to joint it (RAM Squad). After I joined it, I meet a lot of people, and I learned different styles of hip-hop,” Liu said. Her goal is to teach dance to new RAM Squad members in future semesters.

This semester Tomi Akindele (sophomore-undecided) is the social chair of RAM Squad. He joined the team in Spring, 2019. For Akindele RAM Squad isn’t just a dance crew, he says that he feels that the members are like family to him. “I learned a lot about the hip-hop culture, I didn’t really think it would mean this much to me when I first started, it’s crazy,” Akindele said.

Jason Wang (sophomore-Kinesiology) started dancing at RAM Squad in Spring, 2019. Wang believes that he has grown a lot as a dancer because of RAM Squad. Wang is in the executive board of RAM Squad this semester as the Thon chair. “I have also come to learn to work with different people, that is something really cool that RAM teaches you,” Wang said.