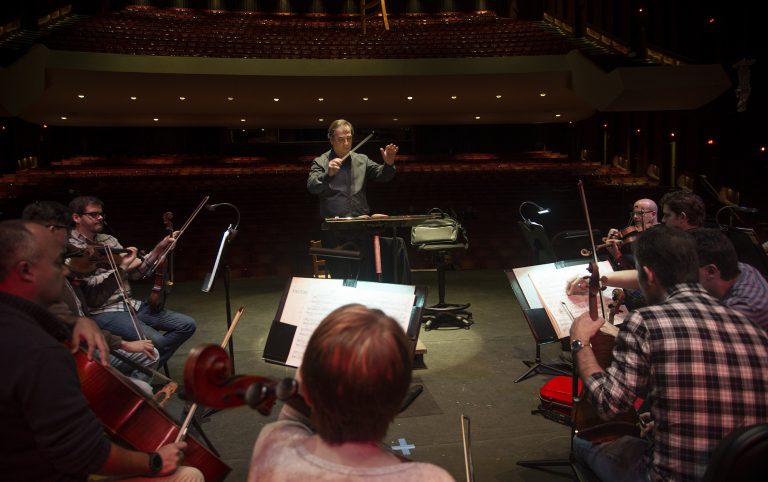 Conductor Maximiliano Valdés leads a practice of the Spanish opera “The Brief Life” by composer Manuel de Falla and parts of Symphony 3 by Gustav Mahler. Photo by Erin McLoughlin


The air surrounding the stage is thick with tension. The musicians stare at their maestro, waiting for the signal to go. With a flick of his wrist, conductor Maximiliano Valdés herds the orchestra into a sequence of beautiful crescendos. He then abruptly silences them and like a football coach yells, “Why are people still coming in? Do they not know practice has already begun?”

The Puerto Rican National Symphony Orchestra runs like a smooth ship with Valdés at the helm. Practices take place in the Luis A. Ferré Performing Arts Center in San Juan.

The 77 members rehearse for three hours, five times a week with regular concerts on Saturday evenings, according to orchestra manager Julio Peña. 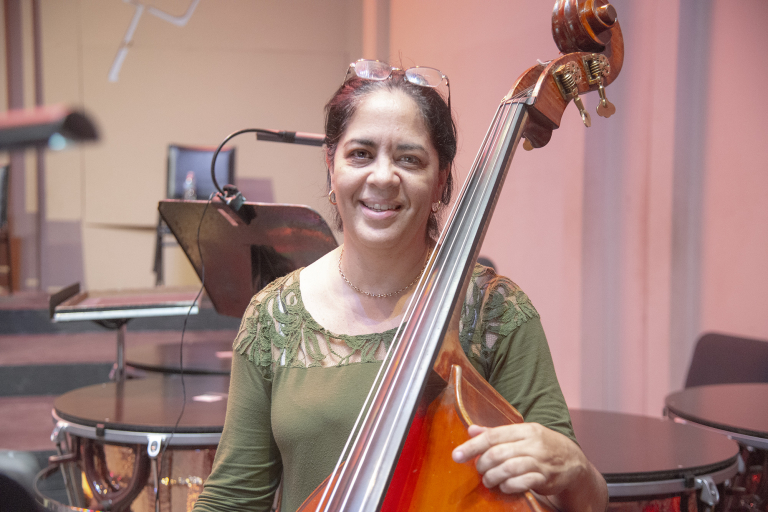 Maricarmen Rivera tried to remain positive during her whole ordeal.  She noticed how neighbors and strangers soon became family. She believes the hurricane brought Puerto Ricans together. Photo by Erin McLoughlin

For double bass player Maricarmen Rivera, it’s emotional to talk about María. Her kind eyes get teary behind her glasses as she adjusts her dark hair. The 52-year-old has a smile on her face despite the sad memories.

She remembers that her own apartment building was close to being flooded. “I realized the parking lot in front of my building had transformed into a sea with muddy waters,” Rivera says. “It was impressive because for the first time I was wondering if the water would rise into my home. Thank God it didn’t increase.”

Rivera, who has been part of the orchestra since 1985, considers herself lucky. “We were actually privileged because our electricity came back a month and a half after, but there were people with no electricity for months,” she says.

Viola player Jose Javier Matos Hernández was one of those people. He did not get power back in his home until seven months after the hurricane hit. He says this while holding his viola tightly, like a lifeline, and adjusting his crisp white shirt. Matos has been in the orchestra for 29 years.

The 52-year-old describes the entire ordeal as terrible. “You're never fully prepared for something like this,” he says. “It was hard to get any food or water.”

The hurricane also had a big impact on his education. At the time, Matos was pursuing a master’s degree at the Conservatory of Music in Puerto Rico. Classes were cancelled and he had a hard time getting back on track. 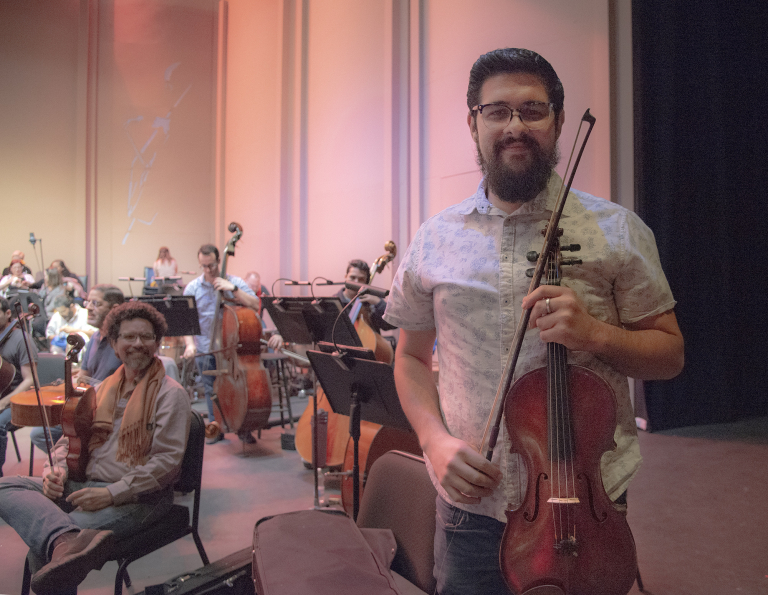 Violist Edgardo Rosaly Sampoll said musicians still managed to meet up for informal practices despite the chaos after the hurricane. He says he is glad the orchestra has. found a way to give back to the community through relief concerts. Photo by Erin McLoughlin


For 29-year-old violist Edgardo Rosaly Sampoll, the main issue was communication. “Two weeks had gone by and we all had doubts: Should we go back to work? Should we just stay home?” he says. “We didn't know anything. We had no communication.” Rosaly smiles behind his dark beard despite the tough circumstances he describes. Slowly, he was able to contact others through acquaintances.

Soon, fellow orchestra members were able to organize themselves into small rehearsal groups. Rosaly says an attempt was made to reach out to the orchestra administration about practices but even they had no idea what to do. Official practices finally resumed after two months.

Enid Collado Almodovar, a violin player, felt that the whole experience was not real. “I felt like I was in a movie. As if it really was a nightmare. None of it seemed real. There’s no water, no light. No cellphones,” she says while shaking her short blonde hair and patting her blue dress nervously.

The lack of electricity meant there was no air conditioning, which musicians need to maintain the integrity of their instruments. “Since these are wooden instruments, the wood absorbs the water and expands, then the sound changes,” Collado says. 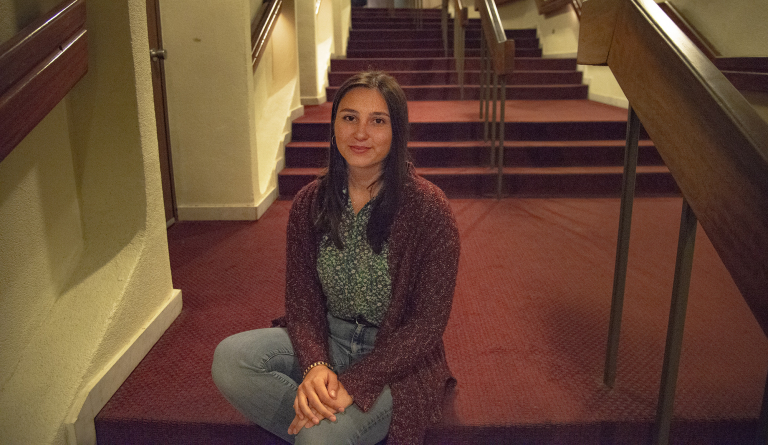 Opera singer Gabrielle Timofeeva said she realized after Maria hit how music is taken for granted. “You really miss the sound when none of your devices work,” she said. “I would charge my phone whenever I could and listen to music all night.” Photo by Erin McLoughlin


María also impacted artists who work closely with the orchestra. Gabrielle Timofeeva López is only 20 years old but already an experienced mezzo soprano. The opera singer describes herself as one of the lucky ones. “I was blessed,” she says. “I didn’t lose the roof of my house.”

Timofeeva is quick to smile and exudes an unexpected ease and humility. She describes her routine in those hectic months: waking up at 5 a.m. with her mother to take care of her grandmother, walking everywhere because there was no gasoline for the car, and even taking her aunt’s job cleaning apartments in order to do something.

As a young adult, Timofeeva also struggled with the decision to leave the island. However, the singer says, “I felt a strong conviction to stay. It felt wrong for me to leave when all of us were going through this together.”

Music in the wake of María

After organizing themselves, the musicians decided to make their own contribution to the hurricane recovery—providing emotional relief through music to the people of Puerto Rico. Free concerts were held at various locations around the island.

Many members describe these concerts as their most memorable experiences of María’s aftermath. The concerts were held in towns all over the island from Ponce to Mayaguez to Guaynabo.

For Rosaly, the trips were life-changing. “We wanted people to feel some sort of hope despite the horrible circumstances surrounding them,” he says. “We went to a lot of shelters where people had lost their homes.”

One concert ingrained in his memory happened in the central town of Orocovis. Rosaly’s viola string broke so he went with a friend to find a new one.

What he saw on the way back shocked him. “We saw how people waited in line for miles to be able to reach a tiny stream of water from a nearby spring. People were trying to shower and pick up water for their entire families and it was a kilometric line,” he says. “That marked me. Maybe in the metropolitan area we had some resources coming in. They didn’t.”

The orchestra played traditional Puerto Rican songs for almost two hours at these concerts. They also gave away food and supplies to those who needed it most.

Rosaly says the whole event was emotional. “We cried, we laughed, we danced. There was a little bit of everything in that concert in Orocovis.” He smiles fondly at the memory.

Timofeeva participated in a concert held in San Juan. “I still didn't have electricity so I had to study Mozart score sheets by candlelight,” she recalls. “I thought I was going to burn them.”

Overall, the opera singer says there were sad, happy, and bittersweet moments throughout, but that it is hard to find the words to describe the experience.

For Collado, the violinist, going back to play for the people was a necessity. “We started to provide a service to the people again because no one had entertainment.  No malls or cinemas were open,” she says.

Collado emphasizes that the orchestra is government-owned and therefore belongs to the Puerto Rican people. “It's part of our responsibility to be there. There are situations where the people need some sort of distraction and well, we did it with absolute pleasure,” she says. 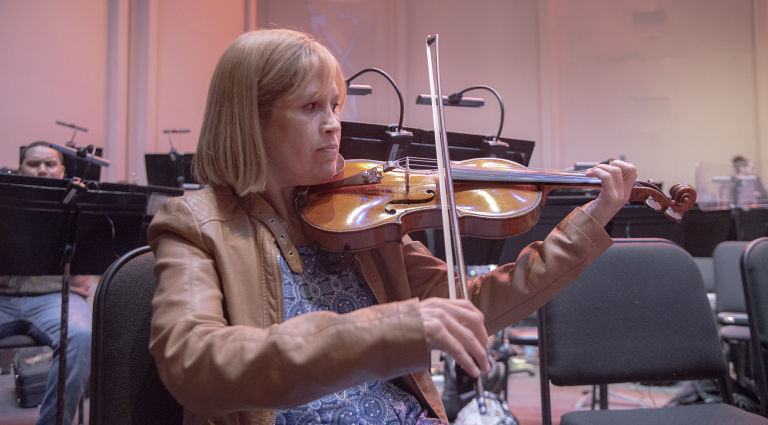 Enid Collado Almodovar said the relief concerts were a great idea but hard to implement. “On these trips with the orchestra we would take a guagua or bus into the middle of the island,” she said, “and sometimes we’d have to turn the bus around because the street would be broken in half.” Photo by Erin McLoughlin


Rivera also considered the concerts an eye-opening opportunity. She describes visiting the town of Utuado, and seeing everyone living in community centers with nothing but the clothes on their backs. “We had a bad situation but there were people far worse off. I still had my home,” she says.

At certain points, the orchestra would have to play on a basketball court or in camps filled with families, but Rivera says the trip was worth every minute. She describes playing for children and seeing their faces fill with joy while listening to the music.

“And seeing the families have a moment of peace with everything that's happening,” she says, “was very gratifying.”

The concerts also had another benefit for the orchestra as a whole: They brought the distant and sometimes unreachable music ensemble to the people’s own backyards. This, Rivera says, “brought us closer to the people of Puerto Rico in general.” 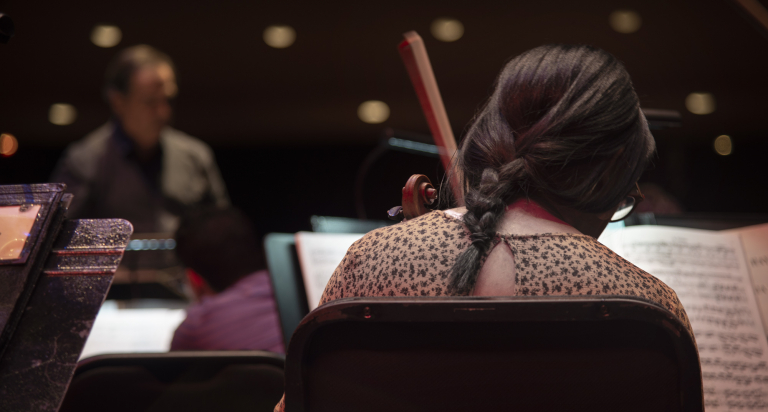 A violin player prepares for the long practice ahead. At the time, the orchestra was practicing for the Casals Festival, a classical music festival held every year in Puerto Rico. Photo by Erin McLoughlin
Tweet

Erin McLoughlin is native of San Jose, Costa Rica. She is varsity fencer who placed top-15 at the 2014 Panamerican Championships. She is interning at Affinity Connection Inc.