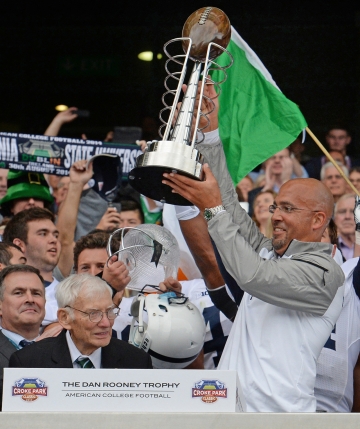 “I’ve seen the highs and the lows,” said Meisenhelter, a native of York, Pa., who’s been a Penn State fan for 50 years. “This is one of the great highs. This is so good. This is wonderful.”

With fans yelling and embracing in Section 704 of historic Croke Park after Penn State’s 26-24 victory Saturday over Central Florida, Meisenhelter said the last-second victory ranks second among all the games he’s ever seen, behind only the 1987 Fiesta Bowl, when Joe Paterno’s Nittany Lions beat Miami to cap an undefeated season and win their second national title in four years.

“The trip was worth it, win or lose,” Doug’s wife, Sue, said after pausing to sing the alma mater. “But it was the icing on the cake that they won.”

“Yeah, but I didn’t come this far to see them lose,” Doug said with a chuckle.

The Meisenhelters were among the tens of thousands of Penn State fans who made the journey to Croke Park, located more than 3,000 miles away from Beaver Stadium in State College, for the season opener. 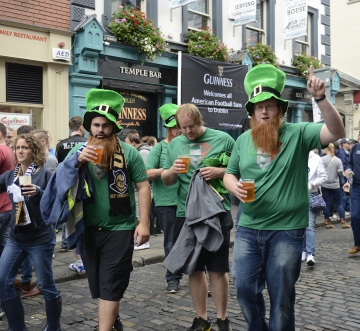 From a morning that started with fans sipping Irish coffee and toasting pints of Guinness in Temple Bar, to an afternoon that ended with the Nittany Lions storming the pitch where American football had been played only twice before, Saturday’s game was anything but ordinary.

When the team huddled together on the sideline to receive the Dan Rooney Trophy, a replica football carved from 4,200-year old Irish bog yew and supported by steel from the construction of Three Rivers Stadium, Hafer took a moment to cheer and vigorously wave her blue and white pom-pom.

The players probably couldn’t hear her voice from down below on field level, but then again, she wasn’t trying to be heard. She was just happy to soak in the moment with her friends and fellow fans. 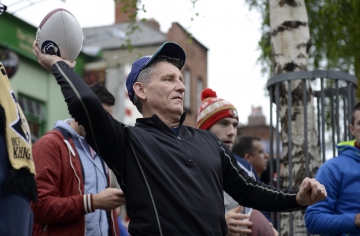 “At Penn State,” she said, “we’re always together no matter where we are.”

For the locals, fans who are used to watching Gaelic football and hurling at Croke Park, the game was something of a novelty.

“Very stop and start,” said Dermot Coran from County Kilkenny, who saw American football for the first time in person. “Timing is everything. The continuity can be inhibited.”

Coran, a hurling fan, said that early on, compared to his beloved sport, American football rated as a four on a 10-point scale. (Hurling got a 10.) After watching Ficken’s game-winner, he had other thoughts.

“I enjoyed that,” said Coran with a smile. “The passion, and the identity of supporting a team, is incredible.

Is it exciting now?

“Absolutely,” he said as he headed for the tunnel to exit the stadium.

Maybe there’s hope for American football to catch on in Ireland, yet. 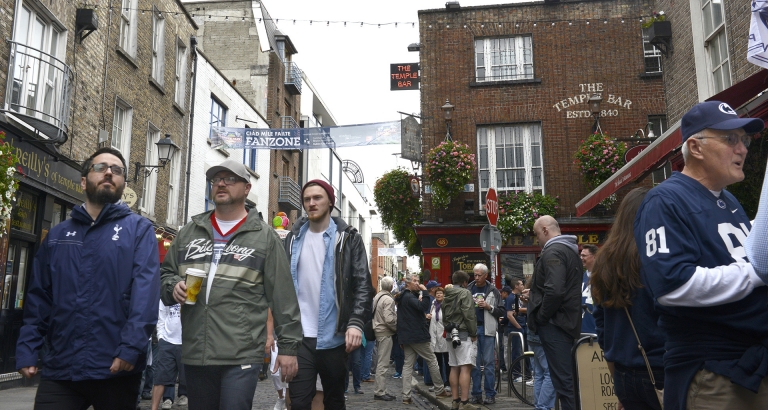 (C.J. Doon (wrieter), and Hannah Byrne and Bobby Chen (photos) are students in the John Curley Center for Sports Journalism at Penn State.)