Robby Schweitzer is a typical college student. He goes to class, he studies, he watches TV with his roommates in the living room of their apartment. He joined a fraternity and goes to parties with his friends. 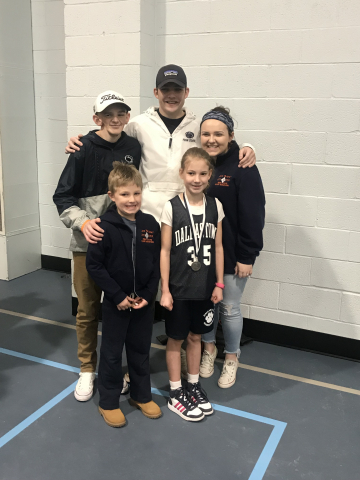 Like one in three Penn State students, he is also heavily involved with THON. But Robby’s participation in the 46-hour dance marathon didn’t start when he came to college. Robby’s been going to THON since he was a toddler. That's when he became the THON child for Zeta Tau Alpha and Alpha Tau Omega

Schweitzer was diagnosed with acute lymphomcytic leukemia when he was two. For three years he went through  hospitalization and treatment. Five years after that he was declared cancer free.

He says he formed a very close bond with the members of ZTA and ATO that continued throughout his childhood, even after he was declared cancer-free. He says it’s one of the reasons he kept going to THON every year. It’s also one of the reasons he decided to transfer Penn State for the rest of his undergraduate career as a Labor and Employment major after starting at Shippensburg University.

Now that Schweitzer is at Penn State this bond has grown even stronger because he joined ATO. Not only is he a member, but he was also chosen to be one of the organization’s THON chairs for THON 2020, which will occur during Schweitzer's senior year.

Schweitzer says he is thrilled that he can give back everything he received from THON and ATO and ZTA to kids that were exactly like him. He is very close to ATO and ZTA’s other THON kids and keeps them in mind while he works toward making THON 2020 the best yet.

Schweitzer is unsure what his future holds after graduation, but he is sure of one thing: he will continue to attend THON and come back to watch his friends dance for the cure to childhood cancer.

I will be graduating with a major in Broadcast Journalism and minors in Spanish and Psychology in May 2019. I have had a broad range of experience in the communications field, including an internship at FleishmanHillard’s D.C. office during Summer 2017. Following that, I spent Spring 2018 studying abroad in Barcelona, Spain where I improved my Spanish language skills. In Fall 2018, I started working as a field reporting for PSN TV and pitched, filmed, and edited news stories that aired on the show each week. I am currently pursuing a career in live video production.