DUBLIN – If starting the season across the Atlantic Ocean, in a city mostly clueless about American football, was the only story line ahead of Penn State’s clash Saturday with Central Florida, it wouldn’t be as interesting.

There’s much more than an unusual, historic location to this one, though. 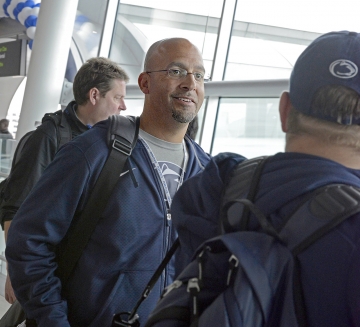 James Franklin will lead the Lions out of the locker room for the first time. The same goes for his staff, many of whom joined him after three years at Vanderbilt.

Then, there’s whether or not this is Penn State’s bowl game. A report this week from The Sporting News, citing two unidentified sources, said the bowl ban imposed under the NCAA sanctions following the Jerry Sandusky case won’t be lifted this season.

On the other side, reports surfaced this summer that longtime Central Florida head coach George O’Leary would retire after the game branded as the Croke Park Classic. The head coach quickly denied the stories, but there’s a swansong feeling to this season for UCF.

Put together, there’s plenty of intrigue surrounding the first international game for both programs.

“Every day it gets closer; there’s more anticipation,” Franklin said after practice at University College Dublin on Thursday. “But I’m not a guy who starts getting excited until the morning of the game.”

He will get butterflies in the locker room, though, he said. There’s plenty that could be on his mind.

It’s light at receiver, where new faces will replace the stable presence of Allen Robinson. The big concern, though, is at offensive line, where just seven to eight players are healthy enough to protect Hackenberg.

On defense, there are more veterans back. Because of that, Bob Shoop’s unit has been ahead of the offense throughout camp.

Having a stout defense against the Knights could be key. UCF returns a gaggle of talented receivers, led by leading returner and top receiver Rannell Hall.

“They have tremendous depth and talent at that position,” Franklin said Tuesday. “I think it’s going to be a tremendous challenge.”

Franklin said the trip isn’t a bowl-game type atmosphere for the team, yet it was able to relax for a bit Thursday while trying out Gaelic games.

For the thousands of Penn State supporters who made the trip, it’s a different story. Groggy fans who spent Thursday fighting off jetlag were in full force by Friday, with somebody in blue and white seemingly on every block downtown.

A pep rally highlighted Friday’s schedule, which ended with meetings and final preparations for the team before bed. The Lions were practicing, but a walk through at Croke Park, like the one UCF had Friday, was not on the schedule.

“I like a controlled environment, so we don’t typically walk through other people’s stadiums,” Franklin said. “I think the fact that we got to check out the stadium [Wednesday] was good enough.”

“I think there were a lot of things that went into it last year,” Hackenberg said. “We’re coming in here as prepared as we can and getting ready to play a very good UCF team.”

Speaking of the Knights, head coach George O’Leary is preparing to start redshirt freshman Pete DiNovo at quarterback. He faces the tall task of replacing standout Blake Bortles, who, along with graduated running back Storm Johnson, led UCF to a Fiesta Bowl upset of Baylor last season.

The program returns plenty from the side that topped Penn State a year ago, and O’Leary is hopeful everyone is clear on one gameday directive.

“The people that have played before, they're anxious to get going, but you got to control your emotions, too,” O’Leary said Friday. “The biggest thing that I worry about all the time is pregame warmups.

“Most of the guys wear themselves out in pregame warm-ups, and the game isn’t played yet.”

According to Irish legend, kissing the Blarney Stone will bestow the gift of gab on those who pucker up.

Penn State didn’t have time to visit the tourist spot, but maybe that’s a good thing. There’s little left to say before kickoff of the James Franklin era.

“We had a good camp, and the past couple days focusing on UCF have been great,” tight end Jesse James said. “We’re just excited to get ready to play.”