Lisandra Morales and Raul Vega are squeezed together on a wooden chair in his room.  The warm, red walls reflect their mood. He serenades her, singing, “Love is all you need,” using his shoulder to help her sway side to side. She smiles and looks away embarrassed, but gives him a kiss regardless. 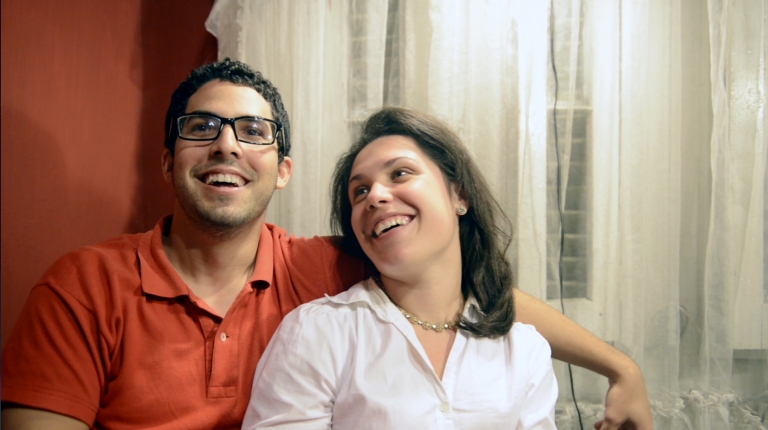 “We spent the night when we [first] met talking in English,” Morales said.

“I had to brag about all my [English] knowledge that night,” Vega said.

The two live in Havana, Cuba. Morales-Alvarez, 23, lived in America for five years while her parents worked in New York City, where she learned to speak her English. Vega Montero, 25, taught himself. He’s never been out of the country.

Though their romance began in English, they may never have the opportunity use it in the country only ninety miles north of their island. Flights to the U.S. cost more than most can afford, and Visas can take years to get.

“We want to go to New York [to visit],” Morales blurted out in Spanish.

Change is coming. One day, the Castros will no longer be in power. And the youth in Cuba want change –economic change.

Everyone can go to the university for free, but there’s no guarantee that education will give anyone a better life. In Cuba, taxi drivers can make more than doctors.

Instead, the university is creating intellectuals, and people who want to see changes. And making these changes is a manageable goal, because for them, the revolution didn’t just happen in 1959.

“The revolution is a phenomenon that has been adapting to the times,” Vega said.

A fifteen walk to the east, Alvaro Alvarez sits at the entrance of the University of Havana, on the stairs that cascade up from the street. In the middle sits the Alma Mater, a bronze statue of a woman in a flowing robe, beckoning in students to come learn. He leans back against the wall, wearing a red Yankees hat, concentrating on the macroeconomics book in his hands.

His light-green eyes look up. Alvarez says the one thing a country needs is a good

“I want to be an economic minister and try to change [the economy]” he smiles. “One way or the other.”

So for him, spending years at the university is time invested to make that change. But he said others his age feel free education is only a waste of time, and working in the street is the easiest way to solve their problems.

Jason Inarez is also studying economics at the university. He and Alvarez grab lunch at a one-room restaurant a few blocks away from the university that’s cheap enough for both of them. Alicia Keys and other American music videos play on the television while they eat. They swirl thick noodles, crushed egg, chunks of ham, and a thin, tomato gravy with their forks. There are no tables, just a small counter neither of them use. They sit on stools and quickly scoop the food into their mouths.

Many young people in Cuba seem happy, Alverez-Valle said. “But in the background, [there’s] longing and ambition. The youth have fun with what they have. They laugh about their problems.”

Inarez is also studying economics. He considers it one of the most important careers in the world.

Former New Yorker Morales is studying biology at the university. She plans to graduate, do her masters, maybe in anthropology research, but go abroad for her Ph.D. This will look good on her resume, she said, and give her time away from the island to make money. She then would return to her country, and try to invest in a business.

Economics student Alvarez said Cubans love their country, but can’t achieve the life they want with out finding loopholes, like moving abroad to make money to bring back, or getting support for relatives overseas. For most, this takes the form of family members in America who send whatever they can to their families. Alvarez has an uncle living in Miami who sends him clothes.

Inarez feels the financial pressures, but he won’t leave his country to pursue a better career.

“I love my country,” he said. “I would love to travel. But to live and to practice my profession, I’d like to do it in Cuba.”

Morales’ boyfriend Vega already graduated from the university. But he’s now pursuing a career different than what he studied, which was religious studies. Now he’s a filmmaker, finding opportunities to work, and making connections.

“[Just] being like anyone else in the world,” he said. “Its simple.”

And while Vega focuses on his film career, the future of his country is just as, if not more, important to him.

“For me as a young man in Cuba…I think it’s a magical thing,” he said. “I’m living in a moment of change for this country. I’m living in a country that needs my help.”

And when the Castros do pass on, his classmate Morales doesn’t think anything radical will happen.

“But I think people will start to realize the importance of being political,” Morales said.

Alvarez believes the Castro ideologies will remain for a time, but will change because the youth have new ideas. He wants it to be that time now.

Inarez-Rabaza even wants capitalism for his country.

But with that flexibility and economic change that the youth want, they still want free education, and free healthcare. This will continue the better parts of the revolution, and move the country forward.

And a mutual understanding between the Cubans and Americans will help better this future.

“I would like to see a new tomorrow where people from other countries can see the Cuban reality,” Vega said.

“Cuba seems like such a happy country. Very fun, and rum, beer, parties, dancing,” he said. “But deep down there’s a lot of longing, a lot of nostalgia, because we want to do more than that.”