As a 23-year-old from Scotia, N.Y., Nelson says she grew up in a fairly liberal environment. Attending the U.S. Air Force Academy in Colorado Springs as a bisexual female was a considerable change of reality in a conservative environment where the majority of students and faculty are “white, Christian, males.”

Nelson was a senior at the Academy when the military's "Don’t Ask Don’t Tell" was repealed in 2013, and knows firsthand the struggles of being part of the LGBT community and being in the military. As a varsity fencer in the academy, she witnessed varying degrees of gender and sexual orientation discrimination in the athletic field as well.

“Most of it is just in what people say,” she said, “like calling people ‘fag’ in the locker room, or saying ‘no homo.’ ”

In 2007, Penn State’s women's basketball coach Rene Portland was accused of discriminating against her players based on suspected sexual orientation. The controversy blew up and became the basis for the documentary Training Rules (2009) in which players described the “anti-homosexual environment” she established during her time as coach.

Nelson says she had a similar experience with her Egyptian fencing coach at the Academy. “He wouldn’t necessarily cut you from the team,” she said. “But he would make you so miserable you would want to quit.” She said he forced female players to both greet and thank him before and after every practice, both verbally and with a handshake, an unusual ritual for a cole 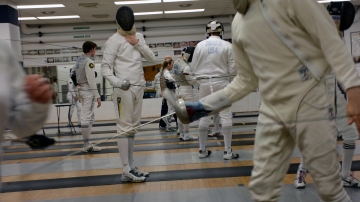 Nelson is having a more positive experience at Penn State, where she says the tean is the “gold standard,” of fencing. Those not involved in the fencing world may not know that the Penn State fencing team holds the most National Championship wins in the country (13 combined), as well as more than all other Penn State varsity teams. Using her fourth year of eligibility (after being red-shirted at the Academy her senior year), Nelson was part of the national championship last year. She now continues to pursue her passion for the sport through assistant coaching.

Nelson’s experience with discrimination and bias have created her determination to be outspoken and promote change in and off the court, both within and outside of the LGBT community. She is the Penn state representative for the advocacy group Athlete Ally.

“Athlete Ally is a 501c-3 nonprofit organization that provides public awareness campaigns, educational programming and tools and resources to foster inclusive sports communities. We mobilize Ambassadors in collegiate, professional and Olympic sports who work to foster “allyship” in their athletic environments. The programs include Ambassadors from over 80 colleges and over 100 professional athletes.” 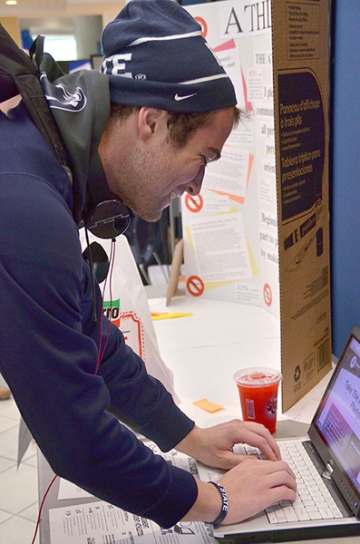 On display at National Coming Out week this October was a board with 297 signatures to the Athlete Ally pledge that Nelson continues to collect from Division I athletes at Penn State. Nelson says she hopes to bring the Ally pledge to requirement BBH courses for all athletes.

In the coming weeks, Nelson will be moving with her fiancé Liz Newman to Colorado Springs. Nelson will be stationed at the Schriever Air Force Base where she will be working Project on a secret military project. Her long term goal is to be an emergency nurse for the National Guard.

Nelson and Newman plan to be married in New York in April of 2016.


When talk of the repeal of Don't Ask Don't Tell was to be repealed, Nelson was shocked at the response of one of her classmates at the Air Force Academy, who said, "If I ever found out that someone in [my] unit was gay, I would kill him. Seriously, I would."

The woman underneath the helmet: Jackie Saideh