Around the Big Ten: Week 11 (Football)

Another week of Big Ten football is just around the corner but yet again, COVID-19 is taking its toll on the conference. Because of positive tests that surfaced this week within the Maryland program, its game against No. 3 Ohio State has been cancelled and will not be rescheduled.

This is certainly disappointing for the Terrapins and their offense as they have been firing on all cylinders the past couple of weeks. Taulia Tagovailoa has been playing out of his mind, throwing for 676 yards and three touchdowns in his last two games.

As for the teams playing this week, Minnesota will host Iowa in Minneapolis on Friday night. Last week, both of these teams blew out their opponents by more than three scores, but this week should be a much more competitive game as this game has implications for who may prevail out of the Big Ten West.

A battle of the unbeatens will happen on Saturday with 3-0 Northwestern taking on 2-0 Purdue. The Wildcats are looking to be 4-0 for the first time since 2015.

A win for Northwestern this week will put them in sole command of the Big Ten West. A win for Purdue keeps them at the top of the pack in the West.

Penn State and Nebraska, two teams who have yet to get a win this year, will faceoff at Memorial Stadium in Lincoln this weekend. Penn State is looking to avoid a 0-4 start, which would tie for their worst start to a season ever, last occurring back in 2001.

The Nittany Lions are really going to have to shake it up this week and come with a new approach to this game, because whatever they have been doing this year, whether it be play calling or just making plays, hasn't worked one bit.

As for Nebraska, they are looking to bounce back after an eight-point loss to Northwestern last week. After not playing two weeks ago due to COVID, it sits at 0-2 and will look to not put themselves in a position that renders them incapable of winning the Big Ten West.

Certainly, the unexpected star this year in the Big Ten has been the No. 10 Indiana Hosiers. They will face off against a Michigan State team that hasn't shown much promise, except for their narrow victory against Michigan two weeks ago.

Indiana will certainly look to build on the outstanding play of quarterback Michael Penix Jr., whose 342 yard and three touchdown game last week was more than enough to beat Michigan Last week. This Indiana team is rolling right now and has not shown any signs of stopping against Michigan State.

No. 13 Wisconsin will face Michigan at the Big House this weekend. The Badgers have only played one game this year, which was the Big Ten opener vs. Illinois back on Oct. 23. This was due to positive tests within the Badgers’ program and opponents testing having positive tests as well.

The Badgers have some ground to make up in the Big Ten West, but they are still the favorite to win the division and it will be interesting to see how they play after having three weeks off from games.

Michigan, although not playing well this year, will hope take advantage of the Badger’s first game back in a while and exploit any weaknesses that this Wisconsin team may show early on in this game

Also, in action this week is Illinois taking on Rutgers up in North Jersey.

Charlie Murray is a freshman majoring in broadcast journalism. To contact him, email charliemurray175@gmail.com

Jonathan “Jon” Draeger is a freshman from Butler, Pennsylvania majoring in broadcast journalism at Penn State. He is a writer and on-air personality for the sports and news departments for CommRadio. He has been featured on live shows and podcasts about collegiate and professional football. If you would like to contact him, you can do so at .(JavaScript must be enabled to view this email address).

Trevor Grady is a junior from Dublin, Ohio majoring in management information systems and minoring in journalism at Penn State. He creates various forms of content for the CommRadio sports and news departments. Trevor is interested in broadcasting play-by-play for a national television or radio network in football, basketball or baseball. To contact Trevor, email him at .(JavaScript must be enabled to view this email address).

Sam Kirk is a freshman majoring in broadcast journalism at Penn State. He is a writer and podcaster for the CommRadio sports department. He is featured weekly in the fantasy football podcast as well as with the live show Hail Mary. Sam has written articles all across the board that deal with baseball, football and basketball. He is also working for a football media company called Inside the Hashes, writing articles and contributing to their YouTube channel.

College Football Game of the Week: Oklahoma State vs. Texas 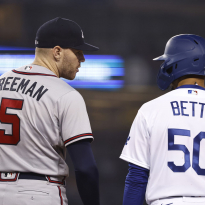 College Football Game of the Week: Georgia vs. Kentucky