Tony is a straight A engineering student with a bright future ahead. So why would he risk everything just for a sport?

"The benefits of boxing completely overpower my fear of the risks involved," Tony says.

Tony says the beginning of freshman year of college, he discovered a passion for boxing and immediately joined the Penn State boxing club. Not only has boxing helped him maintain a healthy lifestyle he says, but it has also increased his overall energy level, defensive skills and gateway to stress relief.

Not only does Tony train five days a week, he says, but he also coaches the club practices held for the beginners in the club twice every week. During his training classes, he mentors those who will potentially want to join the club. Tony is a firm believer that boxers are not born, they are made. 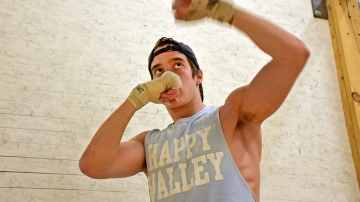 Anthony is practicing his dodging and punches before sparring a fellow boxing club member in the ring. Photo by Natalie Monte

Tony says he plans on improving his boxing skills through out the rest of his life, not only for the great physical benefits, but the mental benefits as well.

Being an engineering major, Tony says he finds himself constantly emersed in countless homework assignments on top of multiple exams a week. He spends the majority of his time in State College at the Paterno library on campus, and is home rarely, solely to eat and relax if at all possible.

Because of the large class load and stress level, Tony says he has found a new appreciation for the sport boxing. Finding time in his busy schedule for boxing has become a top priority because of the stress relief it provides for him. He also sees it as a means of "escape" from the reality of being a commited full-time engineering student.

Tony has only participated in one real fight but says he plans on fighting again in the future.

I want to pursue a career working in the communications and/or marketing field.