RIO DE JANEIRO (AP) — Powerlifting star Majid Farzin walked to the platform to roaring applause. Then, complete silence as he attempted his lift. 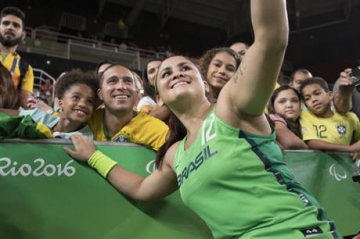 Brazil's Lia Martins takes a selfie with fans after Brazil's game against the U.S. in a women's wheelchair basketball quarterfinal game at the 2016 Paralympic Games in Rio de Janeiro, Brazil The U.S. defeated Brazil 66-35. The spirit of Brazil’s fans, some of whom could not afford Summer Games, has lifted the Rio Paralympics. Tickets sales have now topped 2 million, organizers say. Photo by Antonella Crescimbeni

Three white lights clicked on, signaling it was good, and the crowd erupted in cheers again, this time even louder. A sea of yellow and green rose to its feet, chanting and waving Brazilian flags.

Welcome to the 2016 Paralympics, where the residents of Rio de Janeiro have shown people from all across the world their Carioca spirit. Cariocas are the Rio natives, known for their warmth, friendliness and laid-back attitude.

Before the games began a week ago, organizers from the International Paralympic Committee were just happy that — after a furious ticket-selling campaign and a price drop to as low as about $3 per ticket — the Rio games seemed likely to surpass sales of 1.7 million, moving this Paralympics into second place behind London in terms of spectators (2.7 million).

But as of Wednesday, the IPC said sales were over the 2 million mark. The sports festival for people with disabilities ends Sunday.

"We have to generate energy (at the games), so therefore, we wanted to bring the public on board and have them provide energy, because in both games we started kind of with an obligation to sell more tickets," said Mario Andrada, spokesman for the local organizing committee.

It's not just that people are coming out to Olympic Park on the edge of Rio. It's who is attending — local Brazilian fans, many of them families and couples, enjoying a day out in a country where roughly a fifth of the population is below the poverty line.

"I wasn't able to take my family to the Olympics because it was too expensive, but we grabbed the chance to see the Paralympics because the price of the tickets was so much lower," said a 42-year-old Rio resident who only gave his name as Marco, attending the games with his wife and three daughters. "I'm really glad to be part of this, especially being able to bring my whole family. It's a really unique moment and we'll probably never have this opportunity again."

Once inside a venue, the Brazilians have been both gracious and enthusiastic. 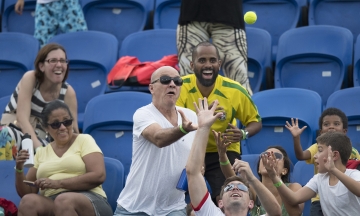 Fans scramble for one of the souvenir balls hit into the stands following the men's wheelchair tennis quad doubles bronze medal match at the 2016 Paralympic Games in Rio de Janeiro, Brazil. The match lasted nearly four and a half hours and the players showed their gratitude toward the fans who stayed withteh souvenirs. Photo by Cameron Hart

So, when Denmark's Ebbe Blichfeldt got lapped and finished last in his heat of a 5,000-meter wheelchair race last Friday, the crowd gave him a huge ovation down the final straightaway.

Tharon Drake, a blind American swimmer who has won two silver medals in Rio, said the fans pumped up his performances.

"The atmosphere at this pool is outrageous. It is the best atmosphere I have ever been in," he said. "You walk out to these guys, they don't care what country you're from. They just need a reason to start screaming and acting crazy, and I love it."

Guilherme Vieira, 24, who was able to attend both the Olympics and the Paralympics, noticed the difference.

"The fans at the Paralympic Games have been a lot more intense. We Brazilians cheer for everyone, from every country because we want all of them to excel at their competitions," he said. "We're so happy to see everyone from other countries and not everyone in the world is like that, but that's the Carioca spirit."

Vieira explained it this way.

"The cheering from Brazilians is just what Brazilians do here and people from outside of Brazil that are here have to adapt to Brazilian culture," he said. "I cheer for different countries because I don't like seeing anyone lose."

(Nicole Barros is a senior majoring in journalism at Penn State University. Penn State and the University of Georgia are partnering with The Associated Press to supplement coverage of the 2016 Paralympics. This story was originally published by the AP in Summer Games 2016.)

Nicole is a senior majoring in broadcast journalism with a sports concentration through the John Curley Center for Sports Journalism certificate program. Throughout her time at Penn State, she has interned with the Big Ten Network, CBS, and most recently ESPN. Nicole will be interning in Los Angeles during her last semester through the Penn State Hollywood Program. To contact Nicole, email .(JavaScript must be enabled to view this email address)