Week 12 of the college football season brings the second week of the College Football Playoff rankings alongside. Let’s take a look at how things have changed this week:

The Tigers move up one spot to the top of the rankings after beating then-No. 3 Alabama in what will most likely go down as the best game of the year last Saturday in Tuscaloosa. What lies ahead for the Tigers could keep them at the top, or perhaps shut them out of the playoff altogether.

With the team now virtually locked into the SEC championship game, LSU will most likely go up against Georgia, which landed at No. 4 in this week’s rankings. If Georgia were to pull off the upset, and Minnesota, Baylor, Ohio State and Clemson were all still undefeated or close to it, this scenario could lead to the Tigers entirely missing the playoff: a rather crazy scenario but also a realistic possibility. Of course, Minnesota and Ohio State will play each other in the Big Ten championship game if they both remain undefeated to that point, but we’ll get to that next. The Tigers look to be on a mission, led by Heisman favorite Joe Burrow, and it seems as if no team can stop them… for now.

Next game: Saturday at Ole Miss

The Buckeyes did nothing to deserve dropping in the rankings after hanging 73 points on Maryland last weekend. LSU just so happened to beat the third-best team in the country on the same day. Ohio State did this without its best player, star defensive end Chase Young, showing everyone just how deep the defense is.

It looks as if we’re on a collision course for an LSU-OSU national championship game, but the Buckeyes still have some work to do. They still have to play Penn State and, if they can get past the Nittany Lions, a most-likely undefeated Minnesota team in the Big Ten championship. But the best team in the best conference in football (that’s the Big Ten, not the SEC) is continuously manhandling every team in its way. If Ohio State can continue to do so, it will have a very strong argument for the top seed in the playoff.

Next game: Saturday at Rutgers

Did anyone actually think the committee was ever going to leave out an undefeated Clemson team? The Tigers have done exactly what they’re supposed to do with their schedule: blow out everyone else. Aside from North Carolina, no team has given them trouble. Sure, Trevor Lawrence isn’t having the season that everyone expected him to have, but he’s still the leader of this team, and the Tigers are loaded at just about every position on offense. The potential matchup of this offense versus Ohio State’s defense should make college football fans’ mouths water.

Next game: Saturday vs. Wake Forest

For the second week in a row, the committee chose controversy at  No. 4. After choosing Penn State over Clemson last week, it choose to move Georgia up from No. 6 to  No. 4. So, why Georgia over Alabama? Well, although they have a bad loss thanks to the South Carolina upset, the Bulldogs also have two impressive wins over then-No. 7 Notre Dame and then-No. 6 Florida. That’s two more quality wins than Alabama has thus far. The committee also likely had recency on the mind, as Alabama’s loss to LSU is fresh in the mind, while Georgia’s loss to South Carolina happened a month ago Still, many should expect this jump to be temporary, as Georgia will most likely have to play LSU in the SEC championship game.

Next game: Saturday at No. 12 Auburn

For the first time in CFP history, Alabama is in danger of missing the playoff. As they will most likely not get the opportunity to add an SEC championship to their resume, the Crimson Tide might need some wackiness to happen in order to keep its streak of postseason appearances alive.

Next game: Saturday at Mississippi State

Next game: Saturday at Arizona

Danny Murray is a freshman majoring in broadcast journalism. To contact him, email dantemurray21@gmail.com.

College Basketball Game of the Week: No. 3 Michigan State vs. No. 12 Seton Hall 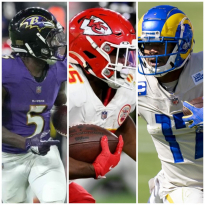