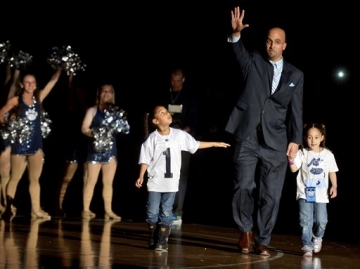 The new age of Penn State football is here.

With the members of the 2014 Penn State football team, and special guest and former Penn State linebacker Michael Mauti in attendance, LaVar Arrington and Franklin broke down highlights of each new recruit one by one.

Never before in Penn State history had an event such as this probably even been considered, nevermind held.

Since the moment James Franklin was named as the 16th coach in program history he has continued to reiterate one theme, family.

“The Signature Event” was about nothing more than just that, family.

It was the face of the program’s way of welcoming his new children, adding to his already 95 sons and two daughters, and presenting them to his extended family, the fans.

Whether it’d be by dominating both the state and region in recruiting or unifying those associated with the university, it always comes back to one word, family.

But how far does this family exactly stretch? Is it just for those with Penn State ties or is it for anyone no matter where they are to be part of?

Arrington, a 1999 first-team All American at Penn State, was vocal and against the previous coaching staff, but not this one.

“Coach Franklin called me up and said its time to bring back the family,” Arrington said. “We are a family that nothing or no one will ever, ever break.”

For the “Pennsylvania boy with a Penn State heart,” it’s clear no matter who you are or where you’re from Coach Franklin wants you as part of his family.

His methods, including the Signature Event, may be questionable, but they are consistent. This is a man who has stated he is committed to being at Penn State for the long haul and plans dominate anyone in his path.

In his first recruiting class, Franklin was able to compile a consensus top-25 class that ranked third in the conference.

“We finished third in the Big Ten, which I’m not happy about,” said Franklin in his news conference prior to the event. “But we’ll get that fixed in the future.”

Call him a cheerleader or a marketer all you want, it works. He didn’t turn Vanderbilt into a relevant program by being somebody other than himself.

He and his staff don’t resemble those of the last 50 years at Penn State, they resemble college football as a whole.

Nationally recruits are praised before stepping foot on the field, so why is this event any different?

The viewpoint that this event was only about Franklin, not the recruits, and was disrespectful to the current players, is laughable.

Do Penn State fans already forget how beloved quarterback Christian Hackenberg was before he donned the blue and white? Yes it was in aftermath of the sanctions levied on the program, but these same recruits are entering a sanctioned program as well.

It all worked with Hackenberg, so give these kids a chance.

Was the event unnecessary? Probably, but it was no more outrageous then the rest of National Signing Day coverage throughout the country.

Don’t say Franklin can’t praise these players for coming to Penn State and then turn around like the thousands out there to watch National Signing Day coverage.

James Franklin has come to Penn State with a plan, an agenda, and these are only the early stages.

Just as with the recruits, give the man a chance. It’s safe to say Vanderbilt is glad they did.

Joe Garofalo is a junior majoring in broadcast journalism. To contact him, email joepgarofalo@gmail.com.