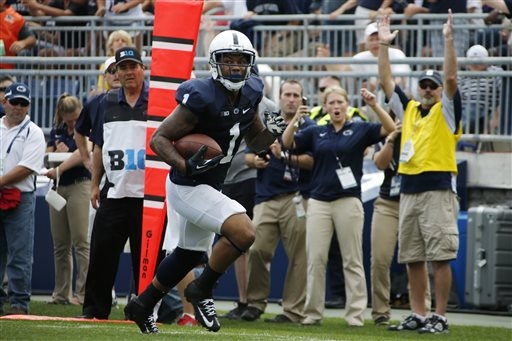 Penn State's Bill Belton runs into the end zone after taking a pass from quarterback Christian Hackenberg during the first quarter against Akron. Penn State won 21-3. Belton will return home to his home state of New Jersey on Saturday to face Rutgers at 8 p.m. on ComRadio. (AP Photo/Gene J. Puskar)

Penn State is the Big Ten’s only hope. At least this is what some are claiming.

Just hours after the sanctions against Penn State were lifted giving the Nittany Lions bowl eligibility this season, several analysts quickly jumped on the bandwagon claiming James Franklin’s club as the Big Ten’s only shot at getting into the newly implemented College Football Playoff.

Much of this assertion stems from losses by perennial favorites Ohio State and Michigan State last weekend. With one loss each, there is still a chance that one of them may be able to sneak into the playoff, but now they would need help.

Now to the Nittany Lions; can Penn State really be considered as a possible final four team? And can they even be considered the team to beat in the Big Ten?

Sadly Penn State fans, the answer to both of these questions is no. Yes it’s great that Penn State can now play in a bowl game, but that doesn’t suddenly make them a better team than they were the day prior.

Sure, it gives them some added motivation this season especially for a senior class that had all but given up on the possibility of returning to a bowl game, but it does nothing in terms of improving their quality of play on the field.

In his weekly presser, James Franklin addressed his team’s play, saying they just needed to take it one week at a time. “We have got to continue to improve each day and each week which is something that I think this staff historically has done a good job of,” said Franklin.

Penn State is off to a great start this season. They beat a tough Central Florida team to open the season, and then took care of business against an experienced Akron team in week two. Since becoming bowl eligible, Vegas has now put Penn State’s odds of winning the National Title at 75-1.

In other words it could happen, but it’s unlikely. Penn State’s top 22 are as good as they come in the Big Ten, but they lack depth across the board and certainly aren’t one of the top four teams in the country.

As it stands now, they sit atop the Big Ten standings, but it has only been two weeks and the Nittany Lions have yet to reach the difficult part of their schedule. Penn State still has to travel to Ann Arbor in a rematch of last year’s four overtime thriller, and Ohio State and Michigan State both will come to Beaver Stadium.

Although Michigan was just shut out for the first time in nearly two decades, it’s still hard to win a game in the Big House. Ohio State was just knocked out of the top ten by Virginia Tech, but they still possess a very talented lineup that can compete with most teams in the country. The same can be said for previously seventh ranked Michigan State who suffered its first loss to Oregon.

At the moment, I believe Penn State is the third best team in the Big Ten. The Spartans are still the strongest, followed by the Buckeyes, and then the Nittany Lions. Until Penn State proves that they are better than these teams- and the only real indication of that is beating them head to head- I don’t think they can be considered as final four contenders, or even the Big Ten favorites.

However, the season is young, and with the added motivation from the lifted sanctions there may just be a small chance that we see something special in Happy Valley this fall.

Jack Milewski is a freshman majoring in broadcast journalism. To contact him, email jbm250@psu.edu.

Penn State in the NFL: Week 1