DUBLIN – Penn State and Central Florida are on their way to Dublin. The Icelandic volcano has settled down. And it’s only a matter of time before the Irish capital becomes the second Happy Valley. James Franklin & Co., Penn State alumni, students and fans will add to a Nittany Lion presence that’s been growing since last weekend. 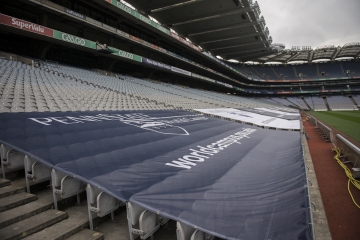 Move over, Gaelic football, because Croke Park isn’t big enough for the two of us. The All-Ireland semifinal, a major sporting event around here, relocated to make room for the American football frenzy about to hit the country.

Labeled as “bizarre and unprecedented” by The Irish Times, the Kerry vs. Mayo move to an “off-Broadway” venue in Limerick is still leading the local Croke Park Classic conversation. Natives may not know much about American football, but they do know it’s a big enough deal to kick the GAA out of its “theatre of dreams,” as the paper put it.

Weather: A Chance of Sunshine. Really.

“Oh, I just know the basics … like the name of the game.”

– Matthew Owen, a sporting goods store assistant,
on how much he knows about American football

(Melissa Conrad is a student in the John Curley Center for Sports Journalism at Penn State.)