Ed Garner didn't always skateboard. In fact he use to be a soccer player.

One day, during his sophmore year of high school, a friend told Garner that downhill skating is the best thing you'll ever do and he had to try it. Garner was hooked.

Garner describes the experience like this, "Goin' like 50 miles per hour, just the wind in your hair, getting in a prone position, all your buddies around you ..." 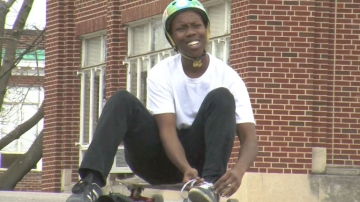 Garner says that there are two types of disciplines when it comes to downhill skating.

First, there is free riding, which is  skating downhill and being as creative as possible.

"Free riding, because you're not competing against anyone, you're just flowing down a hill just doing slides and no one is telling you what to do, so that's definitely the most free you can be on a board," Garner said.

Then there is downhill racing, which is like it sounds. Competitively racing other skateboarders from the top of a hill to the bottom at top speed.

Garner says he prefers racing to just doing slides because he loves to go fast and he enjoys competing. He said he frequently competes in downhill races that typically take place on mountain roads.

The sport of downhill skating isn't as big as Garner wishes it to be, but he'd like to do as much as he can for the sport in order to see it grow on a national stage. Garner wants to be skating for a long time and hopes to one day make a living off of the sport he loves.

"As long as my feet will hold me up, I'll be skating," Garner said.

A Skaters Point of View

To make these videos, skater Ed Garner raced downhill with a Go Pro camera strapped to his helmet.

Upon graduation I plan on getting my masters in kinesiology.

The one man team