Five things to know: Lots of records at the Rio Paralympics

RIO DE JANEIRO (AP) — The Rio Paralympics have hit the midpoint, with its Brazilian hosts overcoming budget issues to stage what has been a successful games so far, with higher-than-expected attendance and scores of records.

For those who are just tuning in, here are some eye-catching things to know about the global sports festival for people with disabilities. 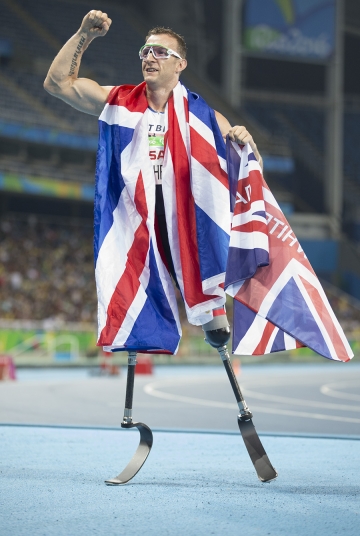 The London Paralympics in 2012 set attendance records, but the Rio version is primed to outpace that event when it comes to setting new marks on the field. Through its sixth day, the Rio Paralympics have seen 132 world records fall, and 214 Paralympic records. The totals for London were 251 world and 314 Paralympic marks. Craig Spence, spokesman for the International Paralympic Committee, said the Paralympics are still developing, which accounts for the gaudy stats. "Maybe in a generation's time we'll see the number of world records reduce," he said, "but at the moment we still see quite a lot."

In many countries, Paralympians get significantly less support than Olympians. The U.S. Olympic Committee awards athletes $25,000 for a gold medal. American Paralympic athletes get $5,000. Sponsorships can be tough to come by, too. U.S. cyclist Joe Berenyi won his fourth Paralympic medal, in 3000-meter individual pursuit, earlier in the games and was once nominated for an ESPY, but has not been signed by a major sponsor.

U.S. athletes Josh George and Tatyana McFadden are two of the top wheelchair marathon racers in the world, but it's not easy. George and McFadden work out six or seven days a week, sometimes twice a day, on the track and on the road, logging a 100-plus miles a week. The athletes also weight train two or three days a week.

Not in the Olympics 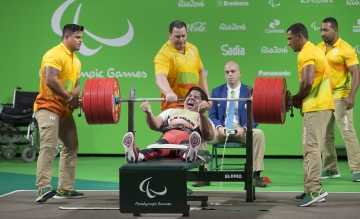 Majid Farzim, of Iran, celebrates after breaking the Paralympic and world records in the 80 kg class at the 2016 Paralympic Games in Rio de Janeiro on Monday, Sept. 12, 2016. The 2012 Paralympic gold medalist lifted 240 kgs to beat the existing record and win gold again. Photo by Antonella Crescimbeni

There are two sports at the Paralympics that don't appear in any form at the Olympics. One is goal ball, in which athletes with visual impairments wear masks to completely block their vision. The athletes try to throw or roll the ball past the end line with opposing defenders trying to block the ball. The ball contains a bell so the athletes are able to react to the shot.

The other game is boccia, the well-known game of skill in which an athlete or a team rolls colored balls as close as possible to a white target known as the jack.

Another sport worth a mention. The ultimate in bench press, which is the only weightlifting discipline in the games. Lying on their backs, and strapped to the bench, competitors lift up to three times their body weight.

(Brett Gravatt is a student at Penn State University. Penn State and the University of Georgia partnered with The Associated Press to supplement coverage of the 2016 Paralympics. This story was originally published by the AP in Summer Games 2016.)