Fly fishing be a huge attraction for college student

Intrigued by seeing other people fly fishing at the age of 11, Wright learned how to fish from his dad and practiced himself.

A senior majoring in history, Wright works as a nation and world reporter at The Daily Collegian. As someone who loves reading and writing, he is also interested in the literature of fly fishing, and attracted by the long history of the sport that the British began hundreds of years ago.

“What really is great about it is being outside of the normal world, being on the stream by yourself,” Wright said. “It’s a great excuse to be part of nature, enjoy good weather and beautiful places.”

Wright is skilled in the meticulous preparation work and teaches others how to cast the line — a big part of fly fishing that he enjoys.

“A lot of it is not about actually catching the fish, but it’s a challenge and needs a lot of patience. You are not in a rush,” he said.

“But when you do catch fish, 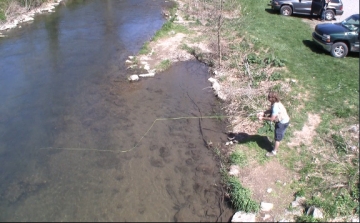 Like many other skills, fishing is a learned talent. During the years that Wright practiced how to fly fish, he experienced many difficulties and interesting stories.

Wright talked about one of the strangest things that happened to him throughout the years.

Once he was practicing casting at a lake while his dad was watching on the shore and talking on cell phone.

“I was busy casting into the lake, I kept letting out more and more line, trying to cast farther and farther into the lake,” Wright said.

“Suddenly, my line behind me (on a back cast) snagged on something and I heard a loud shout. I turned around and saw my dad attached to my line. He was not very happy,” he said.

“I had let out enough line that my back cast had snagged my father. He was wearing a bandanna around his head, and the fly's hook just happened to stick into the fabric, and not him!”

The preparation work of fly fishing

Chris Wright explained the complicated and meticulous preparation process of fly fishing, which is his favorite part.

I am a senior majoring in print journalism with a minor in economics, and I am from Beijing, China. I am working as a nation and world reporter at the Daily Collegian, the student newspaper. I interned at China Daily last summer as a business reporter, and I would like to combine my knowledge of journalism and economics after I graduate.