The 25 players that Franklin expected to sign all became official around 7:45 a.m.

“Today was about celebrating the class,” Franklin said. “All the faxes and NLIs (National Letter of Intent) we were expecting came in.” 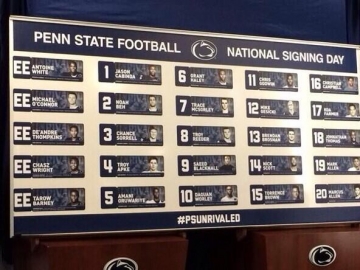 Antoine White, Michael O’Connor, De’Andre Thompkins, Chasz Wright, and Tarow Barney all enrolled early and their scholarships will count towards the 2013 class.

To fill out the recruiting class Franklin brought five recruits with him from Vanderbilt.

“When we got the job we called all the Penn State commits,” Franklin said. “The next thing we did was call all our former Vanderbilt commits and to be honest a lot of those kids started to recruit us and that’s because of the relationships.”

Penn State’s class ranks 23rd in the nation and is third in the Big Ten behind Ohio State and Michigan according to ESPN Recruiting Nation.

After Franklin was done answering questions, offensive recruiting coordinator and wide receivers coach Josh Gattis spoke with the media and described what the last three weeks were like for the coaching staff.

“It’s been a rollercoaster ride and it feels like it hasn’t reached the top yet,” said Josh Gattis the offensive recruiting coordinator.

Gesicki, who played his high school football at Southern Regional in Manahawkin, New Jersey, played in both the Under Armour All-American game and the McDonalds game.

“I don’t know if I’ve ever heard of a kid that was invited to the Under Armour All-American game and the McDonalds All-American game. That’s pretty impressive,” Franklin said. “He’s basically a wide receiver.”

Rivals ranked Gesicki the No. 1 tight end prospect in the 2014 recruiting class.

“We all feel great about Hackenberg, but he’s the only scholarship quarterback at the time we got the job,” Franklin said. “Luckily for us when Michael first came from Canada he was in Tennessee and worked out for us and we recruited him and we had a relationship so I think that helped..”

O’Connor played in the Under Armour All-America game and threw for one touchdown.

Thompkins will provide Hackenbarg with a new weapon after the departure of Allen Robinson.

“After that to me you look at our roster we got a quarterback that we feel really good about and it would be a shame if we didn’t surround him with talent,” Franklin said.

While the players are being celebrated today, once they arrive on campus they must reset.

“We de-recruit them. Nobody cares about the star rankings whether you’re a two star or a five star, it doesn’t matter. You went from being the big man in high school to the bottom of the barrel,” Franklin said.

Penn State is still dealing with scholarship reductions in the aftermath of the sanctions.

“We have holes in the roster and were not gonna fill all of our needs and depths in one year,” Franklin said. “ The most glaring one was offensive tackle.”

As Franklin has reiterated since taking the job, education is just as important as athletics.

Mike Wargon is a junior majoring in broadcast journalism. To contact him email, mjwargon@gmail.com.