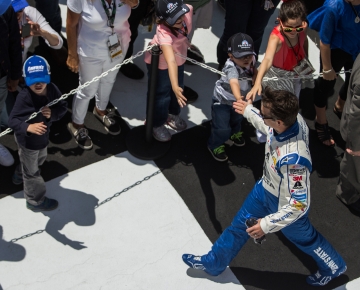 NASCAR driver Jeff Gordon greets fans as he makes his way to the track for the start of the Axalta 400 held at Pocono Raceway on Sunday, June 7. Photo by Nick Thomas

It just wasn’t the one that mattered most.

Coated in Axalta paint of Penn State blue, Gordon’s car was a favorite among his Pennsylvania fans who came to see him race in his final season. His No. 24 was a marquee car for the race – the Axalta ‘We Paint Winners’ 400 – and had performed well in qualifying, finishing fourth.

But it wouldn’t see victory lane. Martin Truex, Jr. took that spot, finally breaking through for a win after a string of strong performances in the Sprint Cup series.

“It’s sad, we want to see him go out a champion,” said Tom Greenwood, a fan. “Obviously he’s been my favorite [driver]. I mean, I named my son after him so obviously it’s been a big deal to me.”

Thanks to a relationship between Axalta, not only the race sponsor but Gordon’s as well, and Penn State, the driver represented the university on Sunday. Gordon, in his final year on the Sprint Cup circuit, wore a fire suit with the school logo on the back, as did his pit crew. His car bore the words “Penn State” on the back quarter panels and featured a special blue paint job. 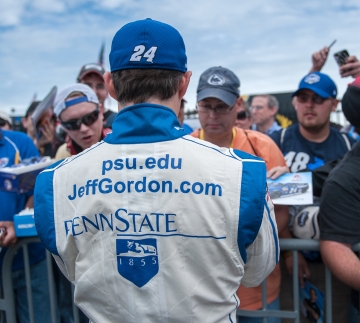 About 100 Penn State business and engineering students also were at the track for the weekend as guests of Axalta. On Saturday, they toured his garage and ate dinner with the six-time winner at Pocono.

Gordon got a warm greeting from the crowd during driver introductions and sat in third about 100 miles into the race. But he fell behind once the smoke started to appear.

Eight cautions muddied the field – all after the 120-mile mark – and seemed to give Gordon trouble. The cars went three-wide on the first restart, forcing Gordon outside and dropping him from sixth out of the top 10.

About 230 miles into the race, Gordon worked his way back into contention, streaking into the lead past Austin Dillon on a restart. The catch was that Alex Bowman hit the wall moments later. Gordon made a pit stop and couldn’t challenge for the lead after that.

“He would have been with [the pack] still, he wouldn’t have fallen back,” Greenwood said. “After that, he was kind of off the pace.”

The driver left the track after the race without doing interviews. It was a tough day for Gordon, who has led more laps in his career than anyone at the Pocono track.

Watching from the tower overlooking the finish line, student Jake Lapiana tucked at his “24” cap while Gordon pulled into his pit just below. In Lapiana’s knapsack was a model of Gordon’s car. He said he hoped a victorious Gordon would sign it after the race.

But by then, his favorite driver had fallen into the morass of the pack. Lapiana, however, wasn’t disappointed.

“It was great to see that the school I go to was on Jeff’s car,” he said. “To me, it doesn’t matter where he finishes as long as I know he gave his best effort and I got a chance to see him in person.”

Greenwood, who had secured an autograph from Gordon after Friday’s qualifying, said he planned to see the driver race at Indianapolis later this summer. He pulled out a Hall of Fame card with Gordon’s image from his bag and exchanged glances with his son.

(Writer Roger Van Scyoc is a student in the John Curley Center for Sports Journalism at Penn State. The text was originally published in the Centre Daily Times on June 7, 2015.)