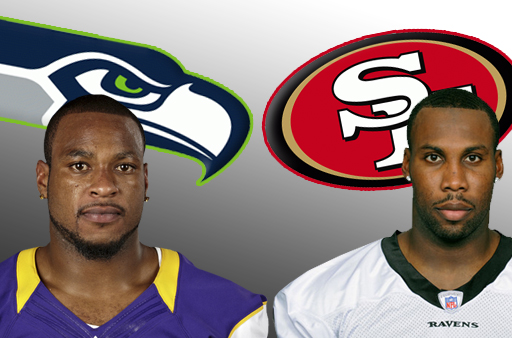 The NFC West arms race (or, rather, hands race) began in dramatic fashion Monday with the Seattle Seahawks acquiring Percy Harvin from the Minnesota Vikings in exchange for a first round pick (25th overall), a seventh round pick and a mid-round pick in the 2014 NFL Draft.

Not to be outdone, the San Francisco 49ers soon acquired Anquan Boldin from the Baltimore Ravens for a sixth round pick. Both trades created a fury of discussion amongst NFL fans and analysts, and it seems that the once meager NFC West is quickly growing into a perennial power division in the NFL.

Both receivers will be joining potent offenses with exciting young quarterbacks. The 24-year-old Harvin rejoins former Vikings like offensive coordinator Darrell Bevell and wide receiver Sidney Rice in Seattle. The combination should excite Seahawks fans, as the pair of receivers had over 2,000 yards receiving in 2009 in Bevell's offense. 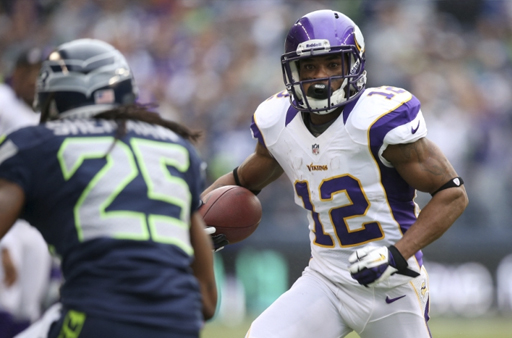 While comparing Russell Wilson to Brett Favre is hasty after just one season, the spread offense is becoming more popular in the NFL, and Seattle may have found the best combination yet with Wilson and Harvin. One of the most versatile weapons in the NFL, Harvin will be a nightmare to prepare for. Add in the talents of Golden Tate, Zach Miller and Marshawn Lynch, and Seattle's offense will be electric in 2013.

There are a couple of caveats for Seattle. The Seahawks gave up a lot of value with the picks they traded, and trading a first round pick for a wide receiver is especially rare. Harvin also has an injury history, with chronic migraines and an ankle injury sidelining him as recently as this past season.

The more puzzling trade of the afternoon was the one that saw Boldin arrive in San Francisco for virtually nothing. Giving up Boldin is a huge blow to Baltimore's playoff chances in 2013. While the receiver is 32-years-old, he put up tremendous numbers in the 2012 playoffs and was one of the main reasons the Ravens came away with a Super Bowl victory.

Boldin will fit very well in the 49ers offense, replacing 36-year-old Randy Moss, a receiver whose production tailed off in the playoffs last year. Boldin is a big short yardage receiver who can also go deep if pressed. Combining his talents with those of receiver Michael Crabtree and tight end Vernon Davis will create huge problems for teams with smaller secondaries. 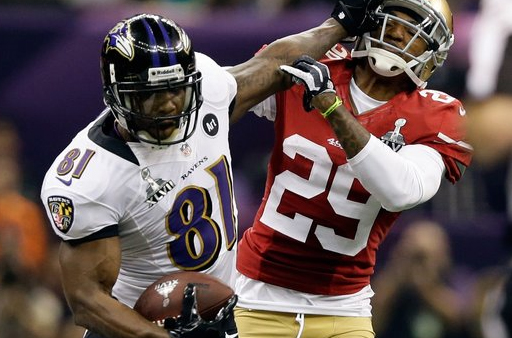 Boldin's contract was too much for the Ravens, despite his All-Pro season

The negative of acquiring Boldin is mainly his contract. The 49ers do not have a ton of cap space and Boldin's contract is for $6 million. However, with just a one year deal and Boldin playing a position of need for San Francisco, the trade makes a lot of sense for them. With 12 draft picks at their disposal, a sixth round pick was an easy price to pay for the 49ers.

For just the 2013 season, the edge still probably goes to Harvin due to his youth and speed, which should be an ideal fit for the Seattle offensive scheme. Boldin will do well in San Francisco, but is not quite the impact player Harvin is. It could be argued that the 49ers should have looked for a better deep threat than Boldin, but when presented with a deal like that, it was an easy decision for the 49ers to make the trade.

Both trades, however, will work well for these teams. Jim Harbaugh and Pete Carroll aren't messing around and are bringing the NFC West back in a big way.

Willie Jungels is a junior majoring in broadcast journalism, a ComRadio Sports Director and an NFL Draft Show Producer. To contact him, email wbj5008@psu.edu.

Willie Jungels is a senior majoring in broadcast journalism. He is a sports anchor/reporter for the Centre County Report and is also a sports director at ComRadio primarily covering the football team as well as breaking sports news. Two major stories that he was involved in covering were the Jerry Sandusky scandal and the 2013 Maxwell Football Awards. His goal is to become a television reporter covering sports in Philadelphia and later become a talk show host. He has interned at NBC 40 WMGM in Atlantic City, 97.3 ESPN Radio WENJ and for the past two summers at NBC 10 WCAU in Philadelphia. Willie also is a fill in producer for the Steve Jones show on ESPN 1450 WMAJ in State College. Willie lives in Northfield, NJ just outside of Atlantic City and enjoys spending time with his friends at the beach. You can reach Willie by emailing him at .(JavaScript must be enabled to view this email address) or by following him on twitter at @WillJungelsPSU