Over the past few weeks, it has become evident that New York Jets cornerback Darrelle Revis will no longer be with the team after the 2013 offseason. Revis has, over several seasons, expressed his displeasure with his contract situation in New York, and it would not be surprising if he once again skipped team workouts in protest.

Revis is entering the final year of a four-year, $46 million contract and will be owed $15 million in 2013. The $3 million in bonuses Revis is owed this offseason requires at least 80 percent participation in team-mandated workouts. If Revis misses more than 20 percent of the workouts, he forfeits $1 million.

Jets general manager Woody Johnson has been sticking to his word that Revis will not leave via free agency, which all but assures that Revis will be dealt. With the NFL Draft just under two weeks away, there remains only one known suitor for the injured Pro Bowler: the Tampa Bay Buccaneers.

Any deal involving the Buccaneers will yield either a first (13th overall), second (43rd) or third (73rd) round pick. However, reports surfaced Thursday that Tampa Bay's front office has grown impatient with the New York front office on getting a deal done.

The deal won't be of the caliber that saw the 2012 second overall pick (and consequently quarterback Robert Griffin III) go to the Washington Redskins for three year's worth of first round picks. No franchise will pay that price for a cornerback.

Whether or not Johnson wants to back out and shop around for a better offer does not matter any longer. The San Francisco 49ers and Dallas Cowboys have backed out of the Revis conversation. While Tampa's offer may not be the most attractive for a max-salary player like Revis, the Jets need to make a deal.

The Jets finished the season ranked second in passing defense even without Revis, who was injured for most of the season. For them, there is little need to overpay for Revis, and keeping him for one more season will likely only lead to more headaches.

New York needs to turn its focus to the offensive side of the ball. Upgrades can be made at quarterback, running back, wide receiver and offensive tackle. Adding early round picks should help out new offensive coordinator Marty Mornhinweg.

For Tampa Bay, the team needs to make a move for a cornerback. In a division with Atlanta, New Orleans and Carolina, teams that are stock piling wide receivers to go along with their quarterbacks Matt Ryan, Drew Brees and Cam Newton, the depth at corner can be a defining move towards making a push for a division title. The Bucs ranked last in passing yards allowed this past season and need desperately to make an upgrade.

Making a major deal for Revis could be a big step towards returning to the playoffs for Tampa Bay. It helps that head coach Greg Schiano is familiar with Revis: the two competed against one another in the Big East when Schiano was at Rutgers and Revis was at Pittsburgh.

Drafting safety Mark Barron last season was a good start. So was signing safety Dashon Goldson last month. But there needs to be more help at the cornerback position. Ronde Barber will be retiring soon, and the rest of the position is depleted.

Tampa is slated to draft 13th this season, one spot ahead of where Revis was taken in the 2007 NFL Draft. But top corner Dee Milliner will be gone by that point, and players like Desmond Trufant, Xavier Rhodes and Johnthan Banks will not provide the immediate impact that a player like Revis would.

Whether or not this is the eventual landing spot for Revis, one thing is for sure: when the 2013 NFL season rolls around, Darrelle Revis will not be a New York Jet.

Ryan Stevens is a freshman majoring in Telecommunications. To contact him, email rvs5276@psu.edu.

D.J. Swearinger’s versatility and athleticism will pay dividends in NFL

Baseball Game Called Due to Weather 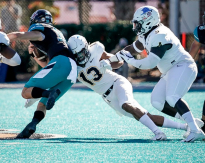