The use of strength training to build muscle and reduce fat has been around for centuries, but during the mid-1900s some began to take their love of weightlifting to a more challenging level. Now known as powerlifting, this challenging activity has more than a hundred thousand people participating in competitions annually. Many of these participants are members of the International Powerlifting Federation.

Penn State powerlifting is trying to break the mold by encouraging women to join this male-dominated sport. The team consists of 30 competitive lifters, of which 11 are female. Powerlifting has been a male-dominated sport since its conception, but in recent years the number of women participating in this strength challenge has continued to increase.

Logan Himich, a female powerlifter for Penn State, is well aware of this fact, noting that she felt a sense of awkwardness when she first started.

Originally from Pittsburgh, Himich has always been involved with sports. In high school she played basketball and lifted in the off-season, so it came as no surprise when she decided to continue to develop her athletic abilities. “I remember guys staring at me, half in confusion and the other half in shock, because I think I can lift as much, if not more, than a lot of guys,” said Himich. “They’re usually either impressed or a little scared.” 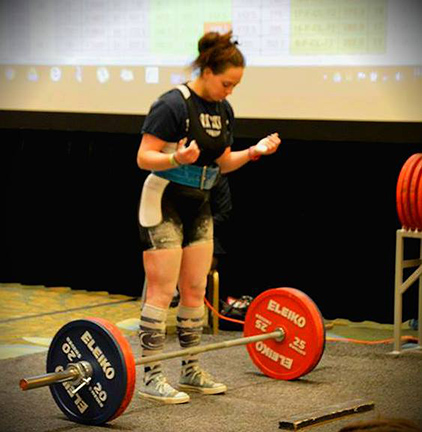 However, unlike the average lifter, Himich has to balance more than just schoolwork and athletics: she also juggles her medical needs. She has been diagnosed with both diabetes and celiac disease, which makes her more aware of her nutritional needs as an athlete.

Celiac disease is an autoimmune disorder of the small intestine, where the ingestion of gluten leads to damage in the intestine. As a result, Himich can't eat bread, cookies, cake or other gluten products, but she doesn't let these food restrictions limit her athletic development. “

Even though my diet is different from most lifters, it doesn’t define my limitations as an athlete,” said Himich.

Similar to the rest of the team, she competes, attends meets and participates in weekly practice meetings. Last year, Himich placed sixth at Nationals, and she continues to practice in the hope of improving her skills.

“Joining the team has been more than just a sport,” Himich said. “It’s a lifestyle.”

Himich said she aspires to continue this lifestyle after graduation, and looks forward to where powerlifting will take her.

Himich explains the different techniques that make up the competitive sport of powerlifting, such as the squat, the bench, and the deadlift.

After graduation, I would like to be a producer for an Entertainment TV Show.