Marcus Lattimore is the quintessential injury risk. The oft-injured former South Carolina running back, a force to be reckoned with when healthy, enters the NFL Draft as the ultimate symbol for the phrase "buyer beware."

A healthy Lattimore is one of the top running backs in the 2013 NFL Draft. But Lattimore has seen each of his last two seasons end with major injuries.

Lattimore entered college as the top high school running back in the country according to Rivals.com. He was South Carolina's Mr. Football in his senior season at James F. Byrnes High School, rushing for 1,898 yards and 31 touchdowns. And on National Signing Day 2010, Lattimore stayed in state, committing to Steve Spurrier and the Gamecocks.

Lattimore's freshman season started with a bang: in just his second game, he rushed for 182 yards and two touchdowns against Georgia. It was a signal to the rest of the SEC that Lattimore would be an impact player.

An upset of top-ranked Alabama featured a 93-yard, two touchdown effort from Lattimore. Three weeks later, he shredded Tennessee's defense to the tune of 184 yards and one touchdown.

Yet it was his performance against Florida that may have been the peak of his college career. Lattimore helped the Gamecocks drub the Gators, rushing for 212 yards and three touchdowns in the win that clinched the SEC East for South Carolina.

By the end of the 2010 season, Lattimore had put together about as good a first-year résumé as any ball carrier in NCAA history: he rushed for 1,197 yards, scored 19 total touchdowns and was named the NCAA Freshman of the Year. 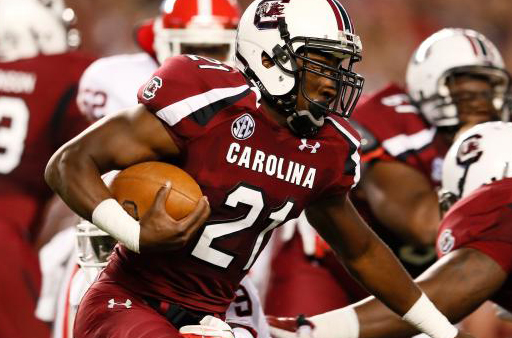 Entering his sophomore season, Lattimore was instantly put on the shortlist of Heisman hopefuls. After rushing for a combined 534 yards and 7 touchdowns in his first three games, he appeared ready to claim the second Heisman Trophy in South Carolina history. The first Heisman Trophy winner at South Carolina, George Rogers, also played running back and was selected with the number one overall pick by the New Orleans Saints in the 1981 NFL Draft. Rogers, who rushed for 7,176 yards and claimed the 1981 NFL Offensive Rookie of the Year Award, retired from the NFL after only seven seasons due to nagging injuries.

Things went from bad to worse for the physical back as he left the game in the fourth quarter due to what Spurrier described at the time as a sprained knee. Less than 24 hours later, news broke that Lattimore would miss the remainder of his sophomore season with a torn ligament in his left knee.

"Our worst fears have been realized," Spurrier said after receiving the news.

Lattimore’s long road to recovery culminated in doctors clearing him to begin his junior season right on time, and in his first game since suffering the season-ending injury a year ago, Lattimore rushed for 110 yards and 2 touchdowns in the win against Vanderbilt

After rushing for 10 touchdowns in his first eight games of his junior year, it appeared the South Carolina wrecking ball was fully healed from injury until Spurrier’s even worse fears were realized during the ninth game of the season against Tennessee. Just before halftime in the contest against the Volunteers, Lattimore casually took a handoff from quarterback Connor Shaw and rushed to the left side for a two-yard gain before being tackled by Tennessee defensive back Eric Gordon.

Lattimore tore his ACL, PCL and MCL on the play, ending his second straight season with an even more gruesome injury. The play recalled the injury suffered by Miami running back Willis McGahee in the 2003 Fiesta Bowl. 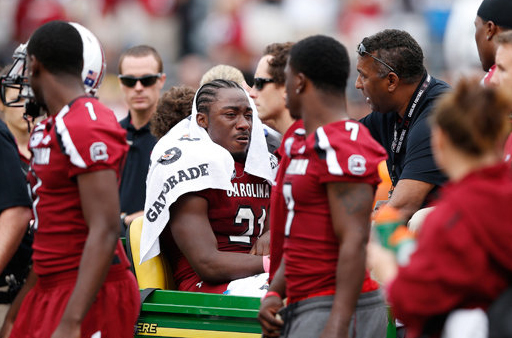 Like McGahee, Lattimore responded by declaring for the NFL Draft. McGahee's stock dropped from a top five pick to a late-first risk due to the severe injury. Buffalo took him with the 23rd overall pick, and McGahee would not be ready for the field until his second professional season. While McGahee never reached the heights he was expected to before the injury, he has been a solid professional back.

Lattimore now enters a similar situation. After a surgery performed by Dr. James Andrews, Lattimore is now rehabilitating in hopes of fully recovering like other victims of major knee injuries. He has sought out the advice of Jamaal Charles, Frank Gore and 2012 NFL most valuable player Adrian Peterson.

Like Lattimore, Peterson was a talented but oft-injured star during his college career at Oklahoma. He suffered multiple injuries that limited his playing time, including a broken collarbone. While none of his injuries in college were as severe as Lattimore's, Peterson's draft stock was hurt by injury concerns nonetheless.

Three teams (Cleveland, Detroit and Arizona) that needed rushing help passed on Peterson in the 2007 NFL Draft due to health concerns, and the Minnesota Vikings used the seventh overall selection to take the former Sooner. Peterson has gone on to have a wildly successful career so far, despite another setback with a torn ACL in 2011.

Marcus Lattimore, despite suffering two severe, season-ending injuries, is far from the only running back to ever come into the league being labeled as a legitimate injury risk that could go down on any given play. Many have recovered from these injuries and had successful careers.

But there are other stories that legitimize the concerns of the teams in this draft. In the 1998 NFL Draft, the New England Patriots took Georgia running back Robert Edwards with the 18th overall pick. Edwards was productive when healthy but never played a full season in college. He had a great rookie campaign with the Patriots, but tore his ACL in a flag football game in the offseason and would only play one more season in the NFL.

Teams are less concerned about that severe of a result with the newer technologies in place, but Lattimore's stock is riddled with red flags. He will most certainly be drafted, but he has likely fallen out of the first couple of rounds of the draft. His once unwavering position as the top running back prospect has come into question. Backs like Alabama's Eddie Lacy, Michigan State's Le'Veon Bell and Wisconsin's Montee Ball have supplanted him at the top of the heap.

Once he is drafted, the questions will turn to how his career unfolds. Will he be remembered like Adrian Peterson or Robert Edwards?

Aaron Carr is a junior majoring in Journalism. To contact him, email adc5230@psu.edu.

How Gonzaga Has Become a Consistent Contender in March