STATE COLLEGE, Pennsylvania - On a typical summer day in Pennsylvania, the sun is shining, the humidity is low and the weather is absolutely perfect for a minor-league baseball game in the friendly confines of Medlar Field at Lubrano Park.

While summer brings temperatures above 70 degrees, the winter and early spring can be quite unpredictable, presenting nearly unplayable conditions when Penn State Baseball is in season. 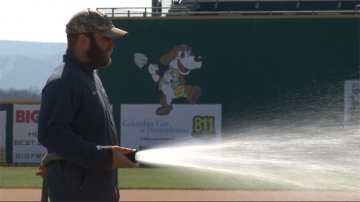 According to Neri, a bad weather week includes below freezing temperatures and precipitation. Per the NCAA baseball rulebook, if the "real-feel" temperature drops below 28 degrees, a baseball game cannot be played until the temperature warms up. Also, if a playing surface is too saturated with water to play, the game will result in a postponement or delay.

Since 2006, it has been Neri’s job to ensure that the home of the Penn State baseball team is in premier playing condition regardless of what mother nature chooses to do. As a three-time winner of the New York-Penn League’s Groundskeeper of the Year award, Neri certainly possess the hardware to manage a field so abstract.

Neri explained that he spends nearly every day at the ballpark from around nine in the morning until a game finishes around ten at night but during the small amount of time the groundskeeper spends away from the ballpark, he loves going fishing with his two children Liliana and Anthony as well as spending time with his wife Christy and their black lab, Duke.

However, in order to have the field ready for Penn State’s season, Neri has to prepare the field beforehand. He does most of his preparation in the fall, just after the Nittany Lions complete fall practice. This includes aeration, spraying fungicides to prevent snow from saturating the field and any finishing touches needed to ensure that the grass is prepared to withstand a harsh Pennsylvania winter.

A native of Williamsburg, Pennsylvania, Neri is no stranger to the area. He started his career in 2002 with the Altoona Curve, only about 40 miles from State College.

“The major difference between Altoona and State College is that State College has Penn State Main,” Neri said. He also explained that he receives assistance from Penn State students in their world-renowned turfgrass science major.

Students are able to take paid-internships with Medlar Field and learn from the sports turf manager by assisting in managing the ballpark. This includes preparing the field before a game through watering, mowing, raking and shaping the infield among many other tasks relative to the field.

“Being here on campus, it’s been a real godsend,” said Neri.

Cameron Walls has worked under Neri at Medlar Field since his sophomore year. Walls says that he came to Penn State unsure of what he wanted to do, but after attending a few Penn State Baseball games, he became infatuated with the art of groundskeeping.

“I’ve played baseball my whole life,” said Walls, now a senior at Penn State majoring in turfgrass science. “I just thought it would be really cool to be around sports, having fun for the rest of my life.”

Not only has Walls risen to being Neri’s right-hand-man, but he has also landed himself a job in New York post-graduation as a turfgrass manager for a prestigious country club.

“Without Matt and Medlar Field, I wouldn’t have been prepared to do this job,” said Walls

While Neri expects Walls will be dearly missed, he is confident that Penn State will continue to produce top talent in the turfgrass department that will asisst him in maintaining and improving the ballpark.

VIDEO: Matt Neri on preparing the field on gameday

Doors open just about an hour before Penn State Baseball games at Medlar Field at Lubrano park, however; the preparation before first pitch begins much earlier than that.

On a typical gameday, the Medlar Field sports turf manager, Matt Neri arrives at the ballpark before everyone else, as it takes a full day to prepare the field for the game.


As far as in-game goes, Neri explained that he does not have much to do other than dragging the field between innings when need-be. He also said that he is consistently on his tablet monitoring the weather to ensure that he is prepared for any inclement circumstances that may arise. Typically this includes rainstorms and in the months of March and April, potential snow storms.

If a rainstorm does come into town, Neri said that he receives help from not only his grounds crew team, but also the Penn State Baseball players and coaching staff in ensuring that the field is properly protected. To protect the field, Neri and the guys pull the tarp from the first base line out into the outfield, eventually folding it over the infield as well as shallow outfield grass.

Even when poor weather is not in the forecast, Neri said that he continues to monitor the weather patterns but has a lot more free time to spend with his crew shooting basketballs in their clubhouse in addition to watching the team play ball.

Mayer currently serves as the music coordinator for Penn State Hockey, Football, Basketball, Field Hockey and Baseball, while also hosting a nightly radio show called the Keystone Sports Beat with Penn State play-by-play announcer, Brian Tripp. In the field of radio, Mayer served as a morning show intern for B94.5, eventually moving up to the role of night-show host in addition to hosting the Eagle 98.7 (currently 98.7 THE FREQ) Morning Drive. In the summer of 2015, Mayer worked as a production intern for the New York Mets and the ESPY awards respectively. Upon graduation, Mayer plans to serve as a music coordinator for the Mets at Citi Field.