Max Rohn remembers seeing a pink building. The fences surrounding it were still intact — a foreboding omen, he said. For most of the city of Fallujah, Iraq, its edifices had been hollowed by war. Seeing one still standing stood out.

For the former U.S. Navy hospital corpsman, it's a memory etched in more than sand and refuse. What followed next seared the image with one indelible, life-altering stroke.

That was 2009. Seven years later, Rohn recounts how his rifle sat between his legs, how an RKG-3 grenade pierced his vehicle’s armored door, how he lost consciousness.

When he came to, Rohn checked on the other soldiers in the convoy, seeing if they were OK. Then he looked down. 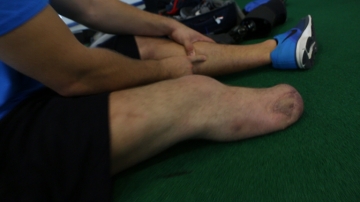 Though Max Rohn’s right leg took the brunt of the blast, his left leg still bears several scars. “It went right through my boot,” he said. Rohn estimates he still has more than 200 pieces of shrapnel in his legs. Getting them all removed would be too destructive to the tissue, he said.
Photo by Roger Van Scyoc

His right leg had been eviscerated by the blast. The rifle had protected his left leg, but his right took the brunt of the explosion.

After two years of rehab and surgery, he elected to have it amputated below the knee. Rohn went through fifteen surgeries overall.

Rohn, a quarterback and hockey player in high school, now competes as a member of Penn State’s Ability Track and Field Team in discus, javelin and shot put. He trains alongside other ability athletes at Penn State, testing their mettle against both national and international competition. Currently, he’s training for the Paralympic Games in Rio De Janeiro this August.

Rohn doesn’t consider himself disabled. He said he looks at himself as any other athlete, wanting to compete against the best and win.

“I’m not done,” Rohn said. “I want to achieve something much higher.”

When the explosion rocked Rohn’s vehicle, it had sheared the armored door from its bearing and knocked Rohn unconscious. He awoke to find it had taken more than his senses.

“My corporal came over, tried to put a tourniquet on and was unsuccessful,” Rohn said, recounting the aftermath of the blast.

Rohn applied the tourniquet himself.

The door’s latch had been blown off. Another soldier close the door — “it was like 600 pounds,” Rohn said — and they evacuated.

“We were flying,” Rohn said.

Boxing Out Of His Comfort Zone