Sean Brame sees himself as an athlete and an agitator. When other people look at him, they see a person who is missing both feet and most of his hands.

“I don’t want to walk down the street and have somebody ask me what happened to me,” he says. (View photo gallery)

Brame’s life changed forever when he was 9 years old. In 2005, Brame sprained his ankle during a soccer game at Red Land High School in Lewisberry, Pa. His doctors initially diagnosed the injury as an ankle sprain. So they bandaged his ankle and sent him home. After a few days, however, his condition got worse as he developed sepsis, an infection causing inflammation throughout the body.

He nearly died. The bacterial infection got so bad, so quickly, that doctors were unable to save his limbs. Both Brame’s legs and his right hand were amputated. His left wrist, index finger and part of his thumb were saved.

Brame is a swimmer – the first aquatic competitor in Penn State’s ability athletics program. He has been training at McCoy Natatorium and Multi-Sport Facility at Penn State’s University Park campus since February 2014 in preparation for the 2020 Tokyo Paralympics.

As a competitive athlete, Brame says he finds faith in where his body can go. He drives himself by pushing his boundaries in the water.

Brame swims five days a week and spends two days in the weight room each week to work toward his goal of competing in the Paralympics.

“I want to leave my name in the record book,” Brame says. “That's why I love the battle and struggle with myself.”

Besides being a swimmer himself, Brame cares for people like him who are physically challenged. He switched his major from engineering to sociology in 2016.

“I’m trying to get into this desert and going to sociology because I want to change the way the world views me,” Brame says.

He says he wants to be the voice of his community by living his life through his faith, by putting others before himself and by reaching out to other people.

He has done work on behalf of the Children’s Miracle Network Hospitals, Ronald McDonald house and Amputee Coalition. He has been sending his message to raise awareness and evoke understanding for the disabled group through public speaking.

“My goal in life is I want to be remembered for doing something great,” Brame says. 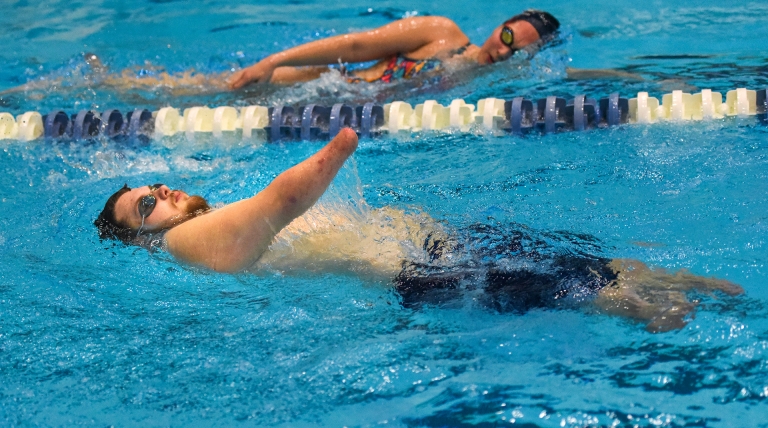 Sean Brame trains in the McCoy Natatorium and Multi-Sport Facility at Penn State’s University Park campus. He is the only amputee swimmer in the pool. He’s shown here swimming laps with the Nittany Lion Aquatic Club (MANLAC). Brame trains with the club twice a week. / Photo by Jingling Zhang 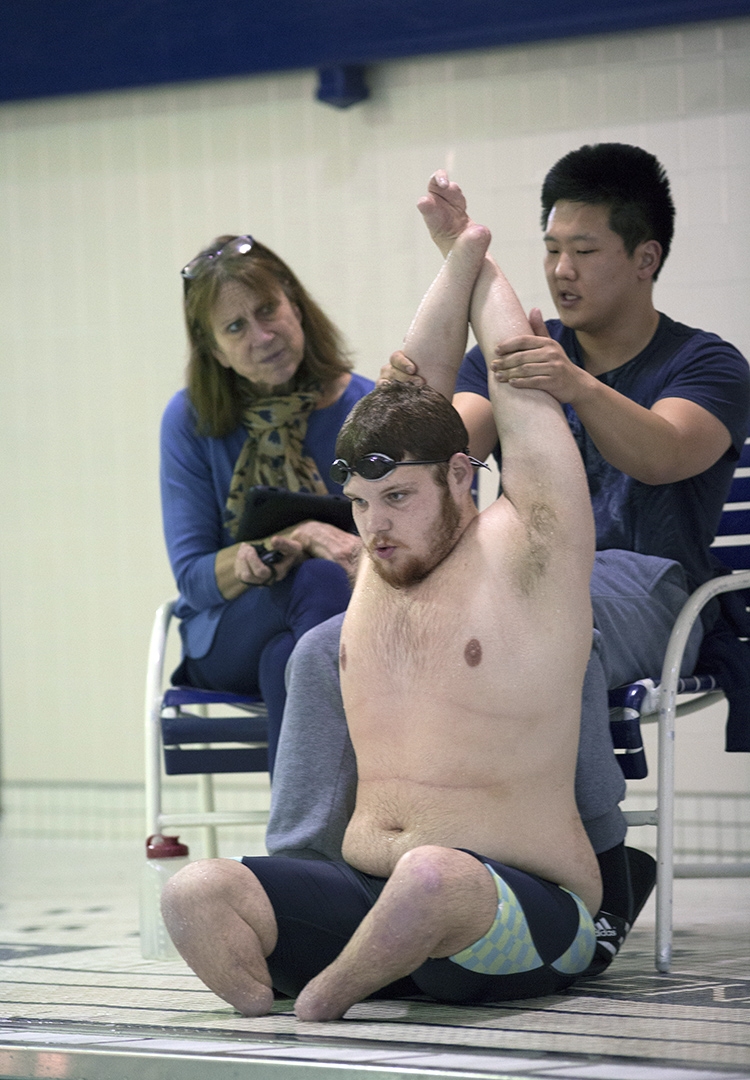 Brame is the first swimming athlete of the Penn State Ability Athletics program. “Disability just a part of me, it doesn’t define me,” Brame says. Coach Jane Brown and assistant coach Michele Hong discuss special training plans base on Brame’s condition after an intense workout during five minutes of cool down stretching of the waist and arm muscles. / Photo by Jingling Zhang 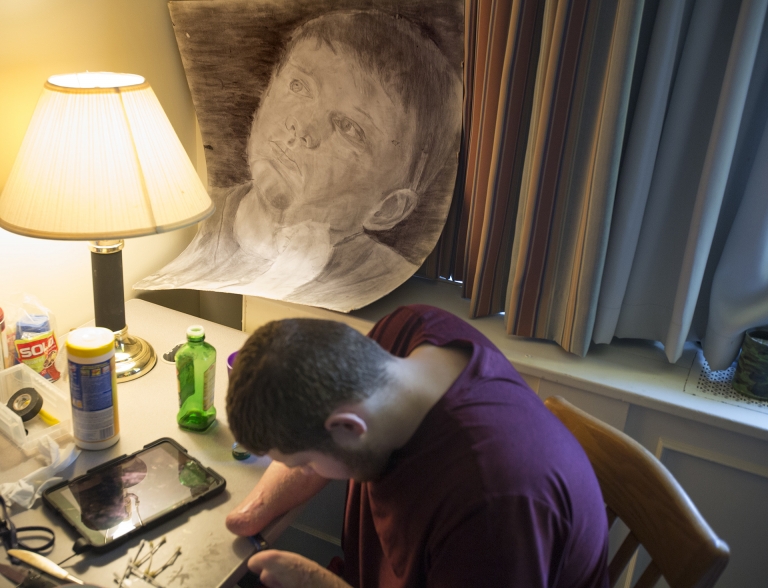 Brame keeps a self-portrait of himself as a 4-year-old in a corner of his dorm room. / Photo by Jingling Zhang 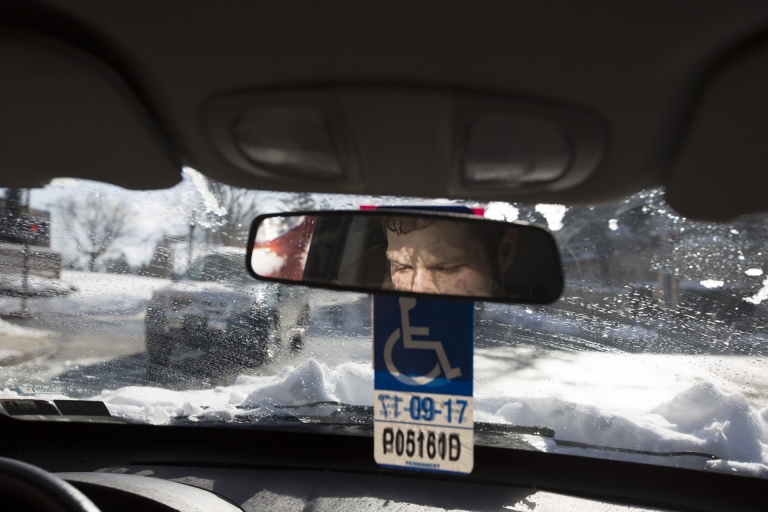 The only adaptation to his car is the handicap student parking permit. / Photo by Jingling Zhang 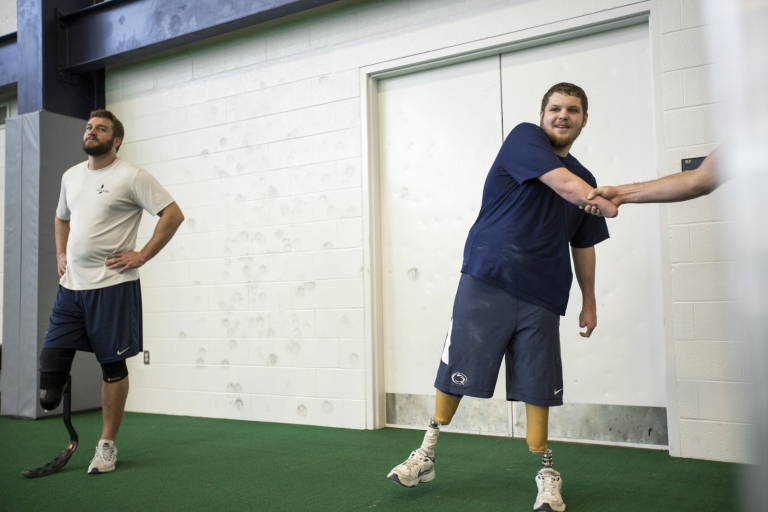 Sean Brame greets a friend as he works out with Max Rohn at the Penn State Multi-Sport Facility. / Photo by Jingling Zhang 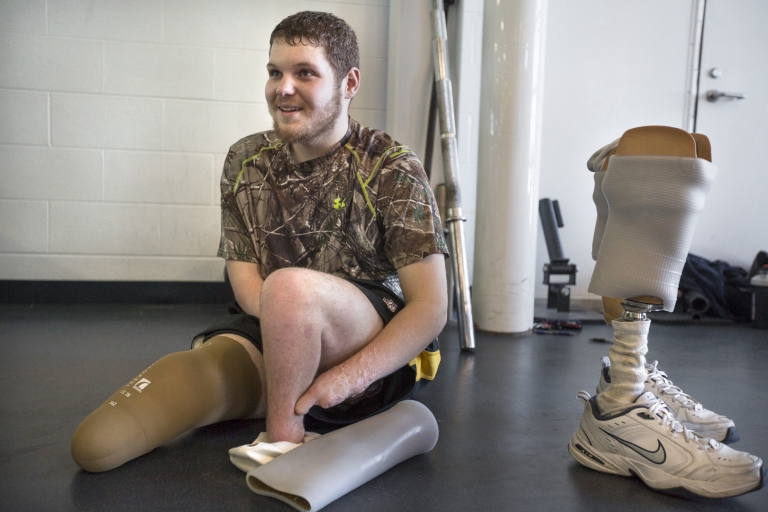 Sean Brame takes off his prosthetics legs before a core strength training session at the Penn State Multi-Sport Facility. He removes and re-seats the legs to avoid chafing his skin before heavy workouts. / Photo by Jingling Zhang 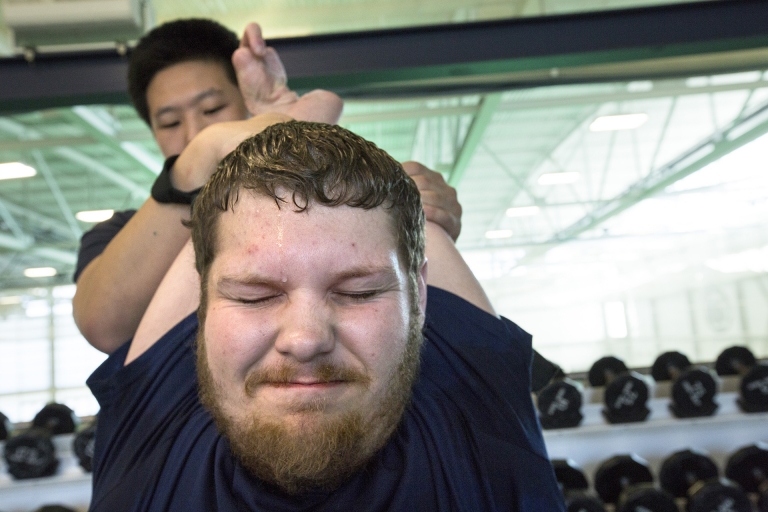 Brame takes a break from an intense workout to stretch his arm with the help of assistant coach Michele Hong. The stretching helps him to keep limber as he trains. / Photo by Jingling Zhang 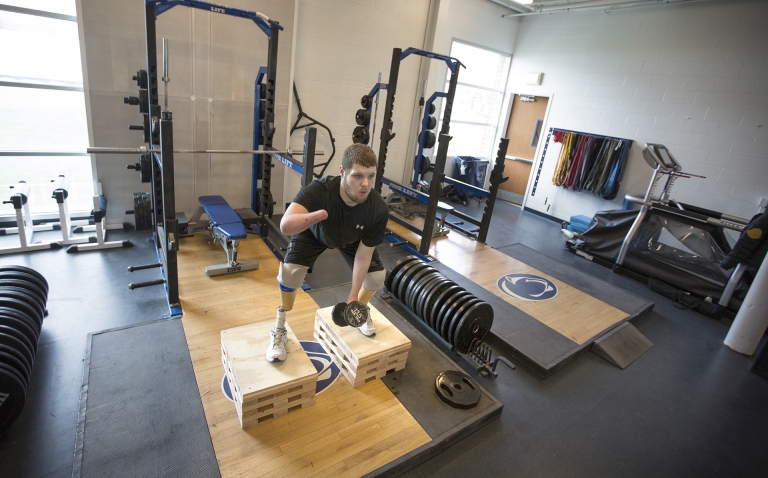 Sean Brame squats as he concentrates on a core strength training during a weight lifting session at the Penn State Multi-Sport Facility. He trains two hours a day, three times a week. He says the weight training is crucial to his development towards his goal of competing in the Paralympics. / Photo by Jingling Zhang 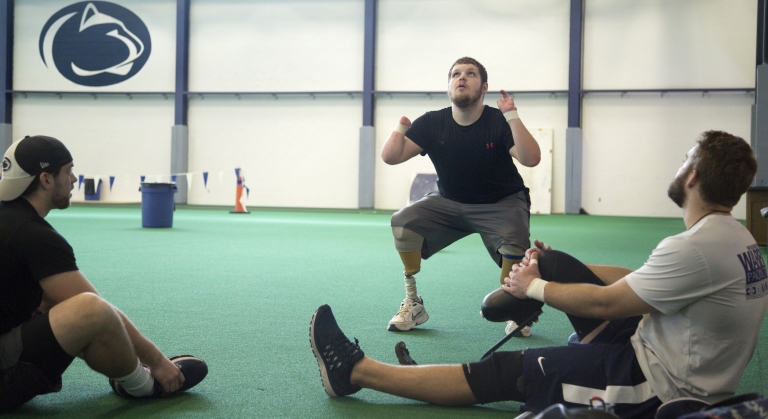 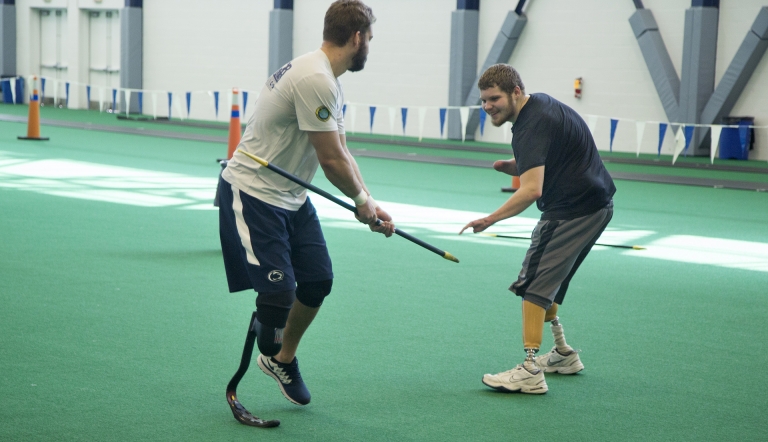 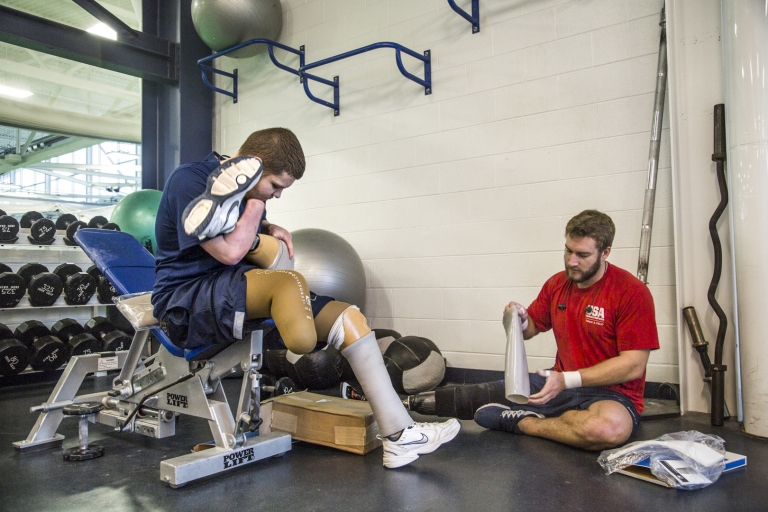 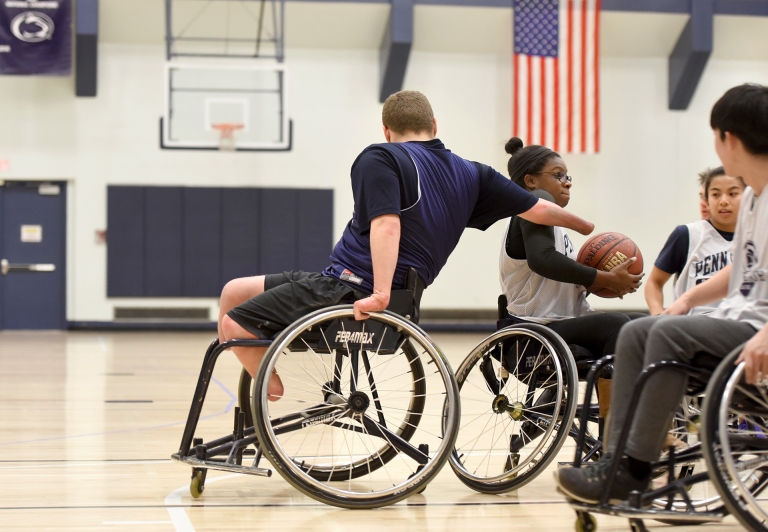 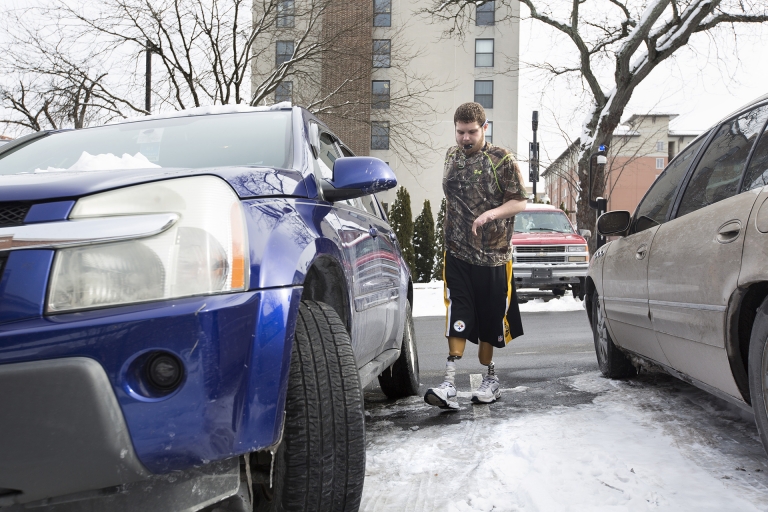 Sean Brame parks his car on West College Avenue going to lab to study after a morning work out. / Photo by Jingling Zhang 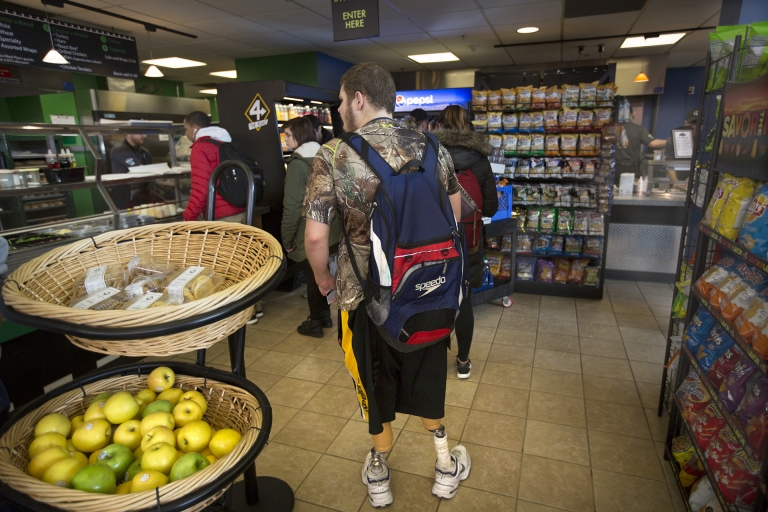 Sean Brame waits in line to purchase a meal in a dining hall before studying for a math examination. / Photo by Jingling Zhang 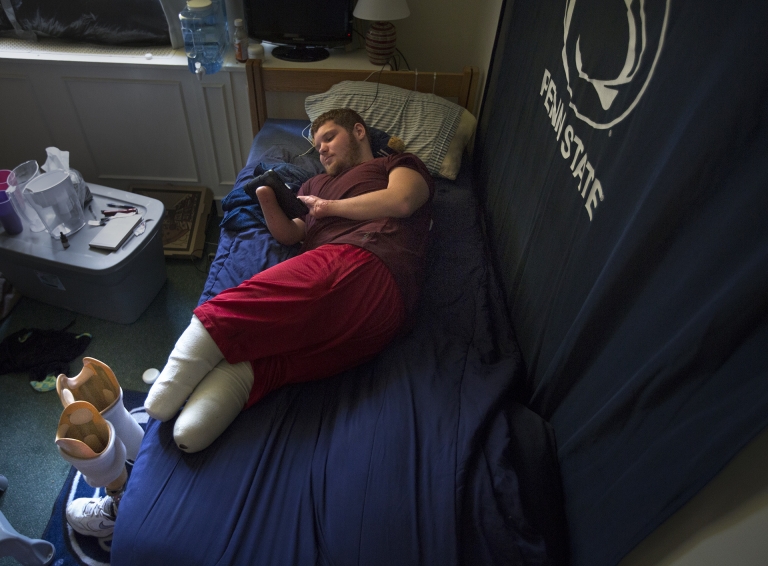 Sean Brame checks his Facebook feed in his dorm in Atherton Hall. / Photo by Jingling Zhang

Jingling Zhang is a senior print journalism major student. She focuses on multimedia production because visual storytelling is more relevant to journalism now than ever. As a multimedia journalist, jingling is adept at still photography and video production. She brings her passion, creativity and international perspective to every visual project she has done and will continue working towards her goals. You can reach her at .(JavaScript must be enabled to view this email address)

MVB: Penn State Pulls Off Their Biggest Upset of the Year, Defeating the Top-Ranked Buckeyes in Five