If you’ve been in the student section at Penn State basketball games, you’ve seen many passionate students. You can see the Legion of Blue rallying the fans behind the team, waving their flags, standing and yelling for most of every game. You can hear the fans try to distract opposing teams with chants of “airball” or various other taunts whenever a player makes a mistake. Even before the game, fans jeer and boo the opponents, then cheer on the Nittany Lions in the pregame introductions as loudly as possible.

But one person who stands out is Ethan Cook. He's a broadcast journalism student at Penn State and is arguably the loudest fan of them all. You can see his emotion with every possession, every shot, every play, every big moment that happens. Win or lose, you can find Cook at every game cheering on the team from behind the broadcasters table.

He’s also the PSU TV Guy. Cook gives out a TV at the final TV timeout of every men’s basketball game. Cook’s job is to find the loudest fan in the stands and award him with a TV. His role allows him to cheer for the Nittany Lions and along with his wardrobe feel like he's a a part of the team.

Cook can be seen at very basketball game in his gameday outfit. The signature piece is his jersey. A jersey that he earned after giving away his first TV at the Fill The Forum event in 2018. 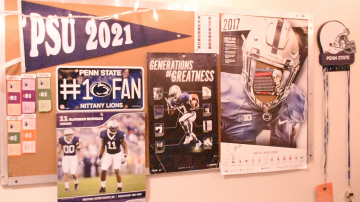 If you saw Cook’s room, you can see some of the Penn State gear and merchandise he’s been able to get over the years. It is a very rare day to not see him wearing Penn State gear.

Cook can also be found cheering at Nittanyville during football season. When College Gameday came to Penn State in 2017, Cook was the Megaphone guy and he shared a story from waiting in line with Nittanyville campers.

His PSU fandom runs in his family. His mom, aunt and uncle are all alumni of this school.

“We’ve been a Penn State Family for as long as I can remember,” Cook said.

Family played a big role in his student life as well.

Originally, Cook wanted to be a theater major, but when things didn’t work out, his dad helped him change his path to broadcast journalism. Cook admits that without his dad’s involvement, he wouldn’t be where he is today.


Cook is always dressed for the game. This is what he wears.


In these videos, Cook shares all this and more. You can watch him give out a TV during a game and see how he does his work. Other content includes his live reaction to Penn State’s Bowl announcement. Was he happy, or disappointed in the bowl game Penn State was selected to? Tune in to find out.

I’m a sports fan from Philadelphia and my goal is to do radio as a career talking sports. I currently attend Penn State and am pursuing a B.A. in Broadcast Journalism. At Montgomery County Community College (Blue Bell, PA) I earned an A.A. on communications with a focus in Digital Broadcasting. My goal is to be a sports radio host in a city that really cares for them.

Around the Big Ten (Football): Week 4

Joey Porter Jr. Has Emerged As The Leader of Penn State’s Lockdown Secondary