Play Like a Kid: The story of Tim Scholly

Video posted May 2, 2016 in Sports by Madeline Shutt and Jeff Tinkoff

Jim Carey was 14 when he began dreaming of being a comedian, country singer Shania Twain began singing in local bars when she was eight, and Michael Jordan achieved his dream of playing in the NBA when he was only 21. For State College native Tim Scholly, the dream was to one day play Division I baseball at Penn State.

Scholly was born June 13, 1994, at Mount Nittany Medical Center. His parents, Dave and Terry, said they brought him home dressed in a baseball outfit to meet his older brothers, Kevin and Brian. 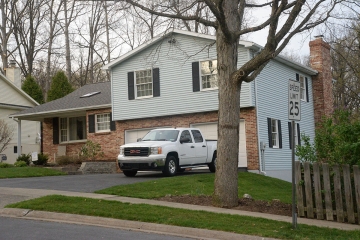 The Scholly's house and driveway are where Tim and his brothers used to have home run derbies. Photo by Madeline Shutt

“I remember very closely at the beginning playing with my older brothers. We always played out in the driveway, just hitting wiffle balls and stuff like that,” said the redshirt junior.

When he entered elementary school Scholly said he followed in his sibling’s footsteps and began playing tee ball, then coach's pitch, and finally a few years later he was able to take the mound.

“The first time I pitched, I remember being on a smaller field in State College. I was nervous because I didn’t know what to expect. I always obviously watched the game just knowing how to do it, but never actually doing it in person was quite an experience. I remember getting up on the mound and just going out there and having fun and not thinking about the results or anything like that just going out there and giving it my best and helping the team win in any way possible,” Scholly said. “Playing little league here in state college was an overall great experience.”

He played all throughout his childhood, from All-Stars to traveling with teams to districts, sectionals, and state tournaments. Scholly, being the youngest, was also “dragged” to his brothers' games, Terry said. And of course, mom and dad were always by his side for the journey.

“They come to watch no matter what. If it's 20 degrees out and freezing cold they’ll come and just watch me play. They have been there every step of the way through little league and playing here in State College at Penn State,” the six-foot-three player said. 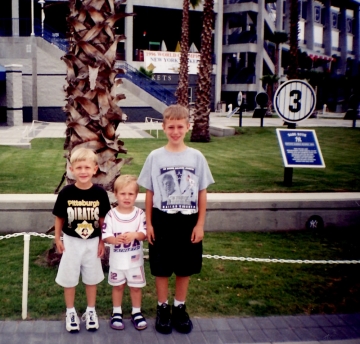 Schollly stands in between older brothers Kevin and Brian outside of the New York Yankee's stadium. Photo courtesy of Terry Scholly

However, Scholly said the most influential person in his journey from sandlot to Division I baseball was his older brother, Kevin, who lettered in baseball at Shippinsburg University.

“He inspired me to be the best I could and I wanted to play at the collegiate level like he did,” Scholly said, smiling. “He is still one that gives me advice.”

Scholly admitted to losing most games he played with his brothers while growing up, but he believes this has made him who he is today.

“We were always very competitive with one another and I think that helped push me to be the best I can be,” he said.

Scholly said he frequently attended Penn State and State College Spikes games while growing up. The field was different, but he said he always looked up to the players and dreamed of being on the field like them.

When it was time to make a decision about college, Scholly said he knew where he wanted to be.

Scholly’s mother said his chance came while he was in Florida, and Robbie Wine, then the Penn State Baseball coach,  approached the 17-year-old. Terry said that it was a little frustrating having to go all the way to Florida to be exposed to a coach who lives less than ten miles away. Nonetheless, Wine offered him a chance to play college baseball. It wasn’t much later that Scholly was a Nittany Lion.

“I came to Penn State. It was always a dream school of mine growing up right here in State College. I always looked up to athletes that came through this university and after coming on a visit here I just saw it was an overall great balance between academics and athletics and everything I was looking for in a university,” Scholly said. 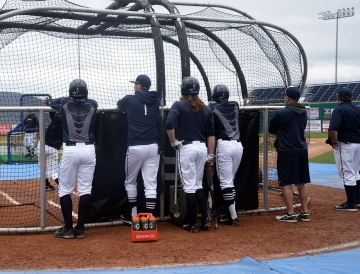 He is majoring in supply chain and labor employment relations and as a freshman earned Academic All-Big Ten Honors. On the mound he made appearances against Youngstown State and Indiana, pitching a combined 1 1/3 innings and giving up no runs under new head coach Rob Cooper.

Despite a strong start, Scholly would face his biggest struggle yet before entering his sophomore season.

After injuring his throwing arm, he had to get surgery in June 2014 for a torn labrum, the cartilage that attaches his arm to his shoulder.

“Coming back from that was definitely a struggle. Prior to that I really didn’t have any injuries or anything like that and having to sit out a full year was one of the hardest things I had to do,” he said.

Since his surgery, Scholly said he has rehabbed, but has been unable to get his throwing velocity up to what it once was. 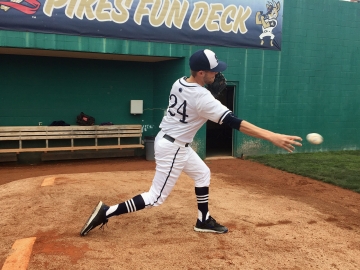 Scholly says throwing accurately and hard is the most difficult aspect of mastering a change to pitching sidearmed. Photo by Madeline Shutt

Coach Cooper and his staff have been there to help him completely change his form from throwing overhand to throwing more of a side arm now, Scholly said. He said he hopes that the change in mechanics will help restore pitching speed and accuracy.

“To be honest this coaching staff has been everything I could have expected and more, they have helped me grow as a person and on the field,” said Scholly.

After pushing to get better over his sophomore year, the next game Scholly would pitch in would be his most memorable and unexpected.

In the fall of 2015, the Penn State baseball team announced they would be traveling over Thanksgiving break to Cuba to play teams from the Cuban National Series. The Nittany Lions would be the first U.S. college team to play in Cuba in more than a half century. 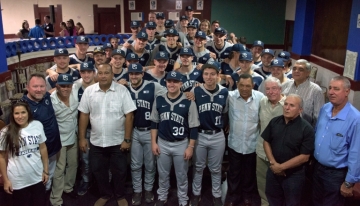 Penn State baseball officials, coaches and team members pose for a photo with Cuban baseball officials after a press conference with members of the Cuban Ministry of Sport in the Latin American Stadium in Havana. Photo by Cameron Hart

After going 0-2 in the first games of a four game series, the team traveled out to Mayabeque where Scholly would take the mound during the eighth inning as relief.

“I remember just trying to soak everything in 'cause it’s a once in a lifetime opportunity. I probably will never get the chance to go back there and play baseball again. Just seeing all those kids running around outside on the fences and all the fans up in the stands,” Scholly said.

He pitched a scoreless inning and allowed only one walk, helping Penn State to get a 9-3 victory. It was the first official game ever won by a U.S. team against a Cuban National Series team.

“To be able to go down to Cuba and be able to pitch on an international level against professional players in their country was an unbelievable experience for me,” Scholly said.

As his redshirt junior season continues, Scholly said he is looking to make many more memories and continue playing the sport he describes as his “passion.”

Scholly says he attributes his success to following one key concept: “Play like a kid whenever you're going out on the field and just have fun and relax; that's when you play your best.”

Scholly was unable to pitch overhand after his labrum surgery. In order to continue his career as a pitcher, he had to learn to pitch sidearm. With help from his coaches and other pitchers, Scholly is able to throw two pitches now: a four seam fastball and a slider. Here is a breakdown of Scholly's new motion.

Dave Scholly takes a look back on his favorite baseball memory with his youngest son, Tim.

Jeff Tinkoff is going into his second year as a production associate for the State College Spikes and Penn State Baseball. He also has been writing for Elite Daily for the past year, through a Penn State chapter. With an interest in law, he hopes to attend law school to study sports or communications law shortly after the completion of his undergrad.

Lady Lions Ahnilated By Caitlin Clark and No. 6 Iowa